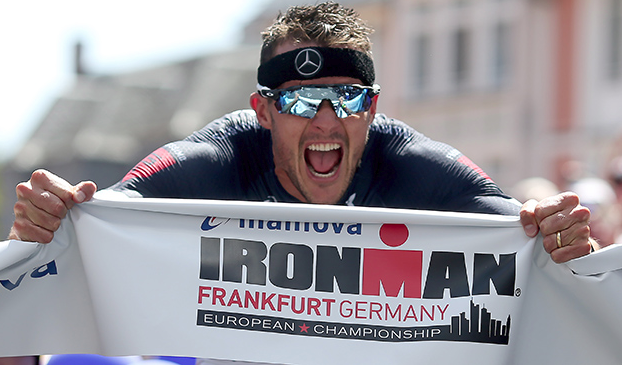 The 2019 Mainova IRONMAN European Championship Frankfurt was anything but an easy win for Germany’s Jan Frodeno. The race wasn’t only tough because of a long battle with his countryman Sebastian Kienle, the competition was full of challenges for all of the men’s favorites. Kienle got a glass shard stuck in his foot when he came out of the water, which had to be taken out by a medic after the bike. Kona champion Patrick Lange flatted on the bike, which destroyed his podium chances and Frodeno had a short x-country ride when he missed the moment to use his breaks in a turn. Moreover, temperatures climbed to 98 degrees Fahrenheit/36 Celsius on the day. The win finally was a question of mental strength and an extra portion of speed, and Frodeno won the battle with Kienle in 7:56:02.

Last year’s runner-up Sarah True (USA) led the race at km 41.5 when she collapsed and had to be taken to the medical tent. Skye Moench went into the leading position at that point and took her first IRONMAN victory in 9:15:31.

Winner of Thanyapura’s Super Camp give away announced
July 28, 2015
Posting....