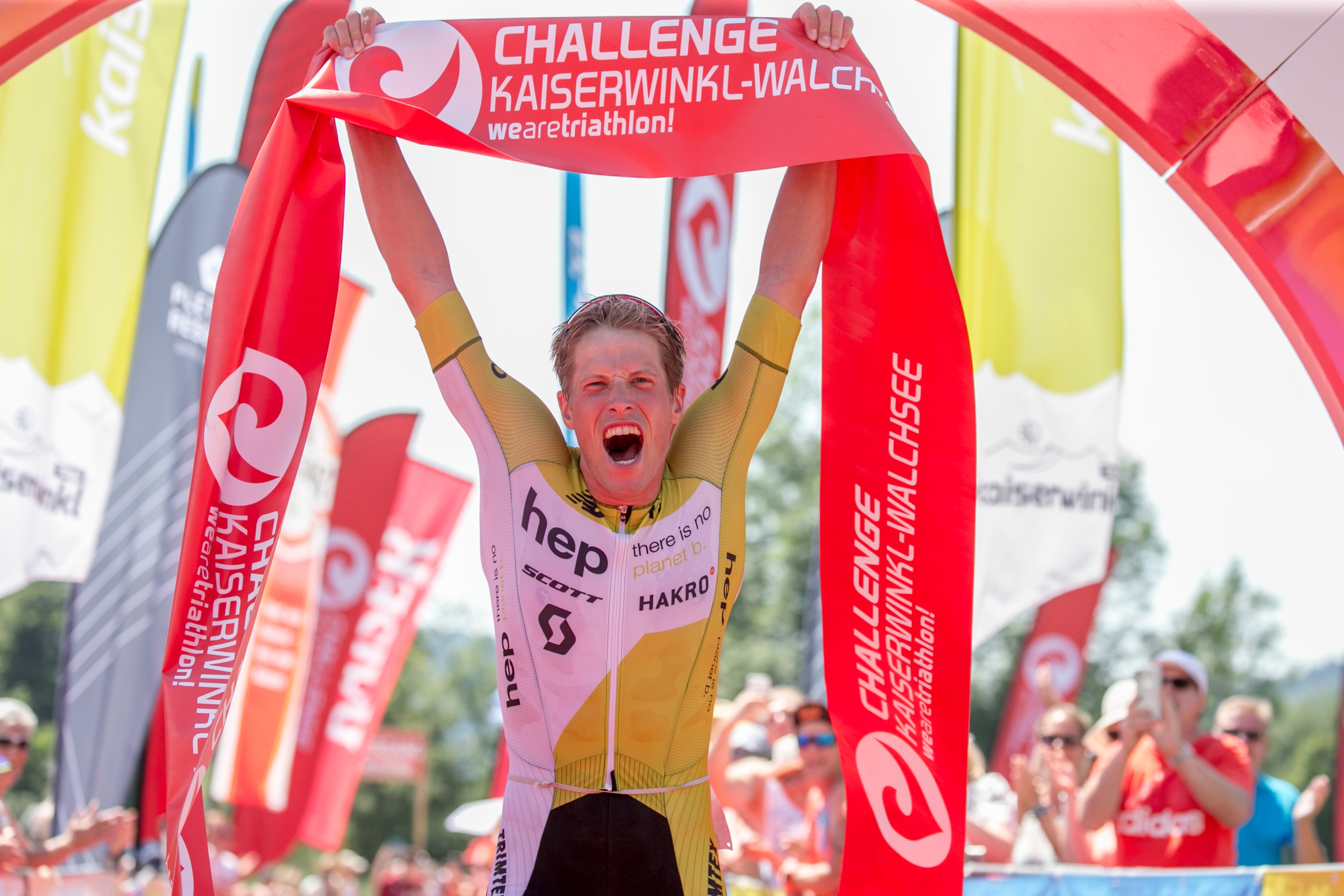 In a high-class race and under extremely high temperatures, Maurice Clavel and Radka Kahlefeldt won the tenth edition of the CHALLENGEKAISERWINKL-WALCHSEE. Clavel initially took the lead from Frederic Funk on the second bike lap and increased the gap during the final half marathon to take the win in an impressive time of 3:50:38 hours. In the women‘s race, Radka Kahlefeldt dominated the event right from the swim  and kept her lead on the bike course ahead of a very strong Emma Pallant, who later came second. Kahlefeldt made pace on the chasing athletes on the final run to cross the finish line first in 4:19:45 hours.

The 10th anniversary of the CHALLENGEKAISERWINKL-WALCHSEE began at 10:30 am with a spectacular beach start for both professionals and age groupers alike. The professional men were first to enter the turquoise blue water of lake Walchsee and early on, it was a group of five men comprised of Nils Frommhold, Giulio Molinari, Frederic Funk, Maurice Clavel and David Bishop, that outpaced the rest of the field. With a swim time of 24:19 minutes, Nils Frommhold was first to reach the transition zone. But from the beginning of the bike course, Frederic Funk was able to take the lead and together with Clavel and Frommhold, they were able to extend the gap on the rest of the field up to the 45km mark.

On the second half of the bike course, it was the eventual winner Clavel, who took the lead and was able to open up a gap of 3 minutes over Funk and the chasing pack to enter the second transition zone. “Thanks to my altitude training camp in St. Moritz, I was able to speed up on the second half of the bike course” said Clavel, who never let up in the final run and held a consistently high pace to expand the gap on his pursuers. With a very strong winning time of 3:50:38 hours, he was first to cross the finish line. “Considering the very strong starting field, this win means so much more and it paid off to do my own race from start to finish”, said Clavel, having defied the scorching temperatures. After 3:53:07, Frederic Funk crossed the finish line in second place and was just as happy: “I started the first bike lap a bit too fast, but since it’s my home course, I was simply pushed to the front by the spectators. Going into the half marathon I went completely over my limit in the heat and didn’t think that I was even going to finish this, so I’m super happy with second place!”

“I wanted to be in the leading pack today, and that’s just what I did!”

In the professional women’s event, Radka Kahlefeldt didn’t hesitate in putting her mark on the race, when she pushed the pace in Walchsee from very early on. Followed by Emma Pallant and Julia Gajer, she reached the swim exit after 26:58 minutes, changed quickly to jump on her time trial bike and was able to slightly increase her lead on the bike course, despite the fact that it was her first time at CHALLENGEKAISERWINKL-WALCHSEE and she was not familiar with the very technical bike course. “From the 70km mark onwards, I tried to outpace Emma Pallant and after the second bike lap, I had the courage to ride the very technical downhill passages more aggressively to shake off Emma, because I definitely didn’t want to risk a head-to-head run in the half marathon”, said an overjoyed Kahlefeldt as first woman to cross the finish line, in a time of 4:19:45 hours. Emma Pallant (4:21:33 hours) and SvenjaThoes (4:26:45 hours) followed in second and third place.

Race Director Andreas Klingler, as well as the chairman of the Kaiserwinkl tourist association,Gerd Erharter were just as happy as the winners of the anniversary edition. “We adapted to the extreme weather conditions with additional water, food and cooling stations and are very pleased, that we were able to get the athletes to the finish line healthy. We have seen two very good and deserving winners today,” said Klingler, who was very satisfied about the smooth organisation of the race. Dieter Wittlinger also emphasized the successful organization: “We are more than happy with the whole event and are pleased about the relocation of the event date this year, which allowed us to welcome more participants to the Kaiserwinkl region. The race pictures promote our region in the best way possible and the whole world can look on! We look forward to the next edition in 2020 as the European Championship”.

See also:  From Zero to Hero - Tum's journey to a full distance triathlon