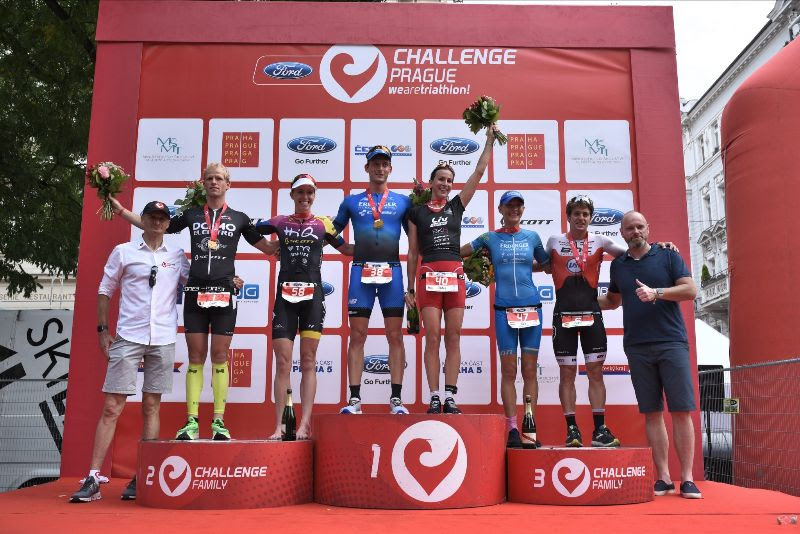 Prague, 27th July – Czech Radka Kahlefeldt Vodičková and German Florian Angert dominated the third edition of FORD CHALLENGEPRAGUE, the biggest triathlon race in the Czech Republic. “It was my first race within the CHALLENGEFAMILY race series in Prague, so the victory means very much to me,” said Kahlefeldt Vodičková.

After her daughter Ruby was born, Radka Kahlefeldt Vodičková returned to racing and she came back in a great shape. This year, she finished second at the world championshpis in Šamorín and in Prague she was among the favourites. From the beginning, her biggest opponent was Lisa Nordén, silver medallist from London Olympic Games 2012. Nordén dominated the cycling course but Czech star got faster in the running stage and she won FORD CHALLENGEPRAGUE in 4:22:13.5, almost two minutes ahead of Nordén (4:24:11.2). “This victory means really much to me. Lisa was strong in the cycling part, she tries to qualify for the Olympic Games. Fans pushed me, it was awesome. I was really looking forward to my daughter and husband in the finish line,” said Kahlefeldt Vodičková.

“Last days I was practicing in much cooler weather, so it was a bit shock for me. I enjoyed the most the cycling part, I tried to focus on myself. Radka is a great runner, I am happy for her that she won at her home soil,” said Nordén. The third was Austrian Eva Wutti (4:31:25.9). “I hope for the podium and I am very happy with the result. I guess it should be pretty nice experience for fans to see all the swimmers. I enjoyed the race very much,” admitted Wutti.

See also:  Salvador is the Next Destination of CHALLENGE FAMILY Triathlon Series

The race in men’s category was dominated by Floran Angert from Germany in time 3:54:49.7. 27-year-old triathlete got in the lead during cycling part and he kept the pace in running course. “I have been satisfied with this season so far, I was once on the second place, fourth and fifth, however, I haven’t won – till today. I put everything into cycling, so my plan was successful. It was a great race,” said the winner of the third edition of FORD CHALLENGEPRAGUE.

Second place went to the traditional triathlete in Prague and the leader of this year’s rankings ofCHALLENGEFAMILY World Bonus, Pieter Heemeryck from Belgium (3:57:36.4), the third was world champion in full distance Pablo Dapena Gonzalez from Spain (3:59:04.02). “I didn’t feel so good today, so I think the second place is really nice. It has been my third start here, I gained gold and bronze medal before and today I won silver – so now it is complete,” rejoiced Heemeryck.
“I feel like I won the race,” said Dapena, who started with bad injury from last week. “I thought that I wouldn’t race here at all, so to be third there today is like victory for me,” added Dapena.
The best Czech triathlete in the finish was Tomáš Řenč in time 4:08:48.6. “It is one place better than last year, which makes me happy. It was an important test for me before Ironman in Sweden, where I want to qualify for Hawaii among professionals,” said Řenč.

Total number of 1360 athletes from 47 countries was on the start list of FORDCHALLENGEPRAGUE.

The Best Training For Weight Loss? | Ask GCN Anything