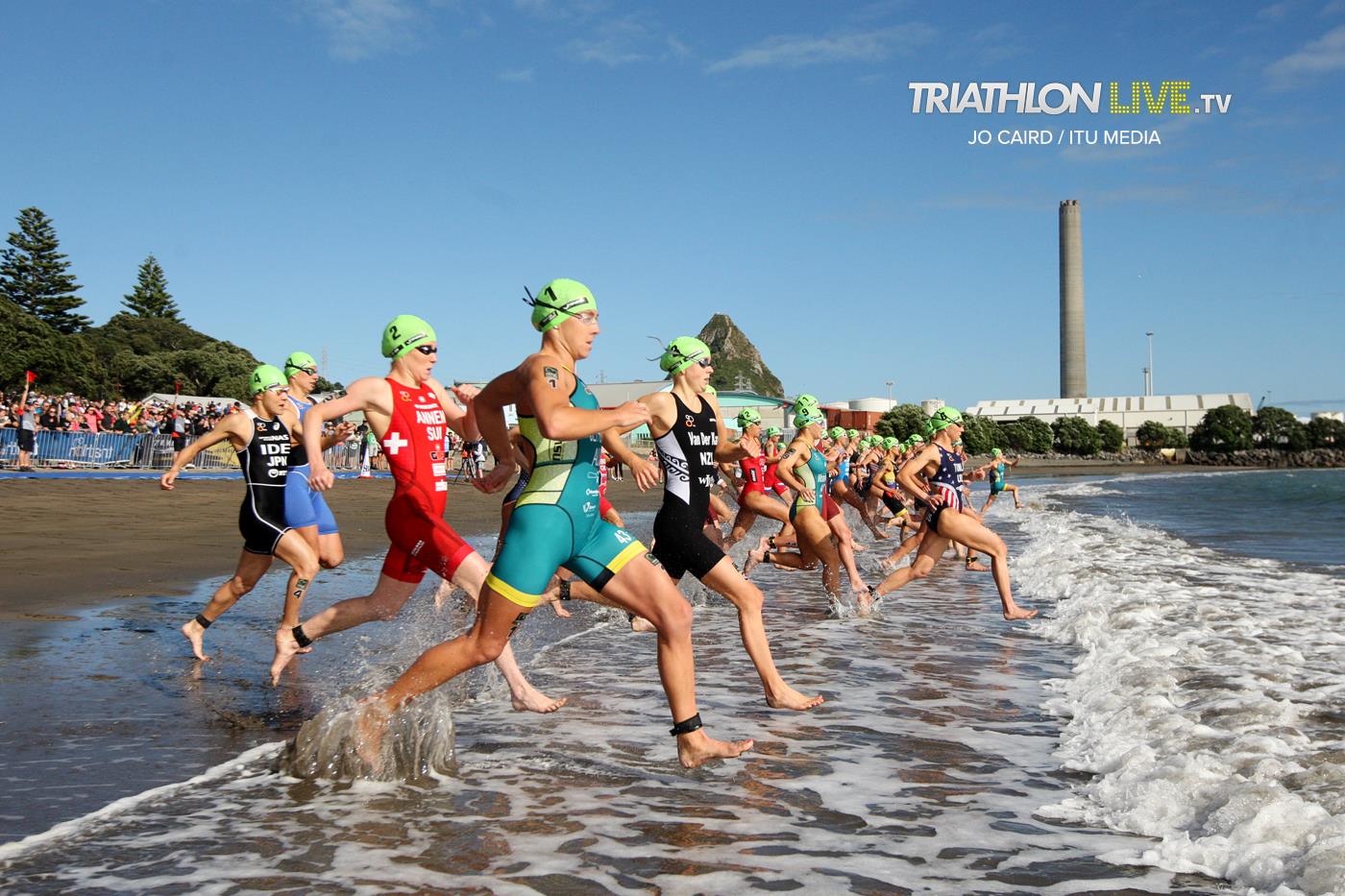 The coastal city of New Plymouth welcomed a field of 67 elite men onto the start line at Ngamotu Beach. The field was stacked with Olympians, Commonwealth Games representatives, sprint specialists and triathlon royalty, Javier Gomez from Spain. The five-time world champion made his comeback to the ITU circuit, with the race here in New Plymouth today.

The water was whipped with a slight chop for the 750m ocean swim which was followed by a 20km technical bike course and 5km run, taking in the scenic roads of Taranaki. The non-wetsuit rule favoured the swimmers and it was no surprise to see Slovakia’s Richard Varga establish an early lead in the choppy conditions. New Zealand’s Sam Ward set his race up with a fantastic swim, to follow Varga into the first transition of the day. Russell White from Ireland and New Zealand’s Tayler Reid were quick into transition with the front group, to make their way onto the bike course.

The famous Spaniard, Gomez, came out of the swim just off the back of the leaders and exited transition with the chase group with some work to do.

The lead group of four men, including Varga, Ward, Italy’s Gianluca Pozzatti and Reid, established themselves early out on the bike course with a gap of 7-seconds on the chase group.

The chase group, including Gomez and New Zealand’s Ryan Sissons, were extremely motivated to close the gap on the leaders. A group of 20 athletes were riding a further 10-seconds down behind.

As the athletes rode their way across the course, the two lead groups formed into one to settle in across the technical and hilly bike sections. Gomez safely made his way across to the main group with his bike strength, proving his experience in the field. As he established himself in the group, the Spaniard attempted to break away from the field and charged up the steep hill. This move put notice on the field, the battle was on and the pace increased hard off the hill.

The event hub welcomed a freight train of chaos as the elite men entered their second transition before making their way out onto the 5km run. Australia’s Luke Willian pushed the pace early on the run with New Zealand’s Hayden Wilde and Germany’s Valentin Wernz trying to hold on to the renowned Australian’s stride.

Wernz, bronze medallist in the 2019 Mooloolaba ITU Triathlon World Cup, didn’t quite have the leg power and came unstuck from the front runners. Germany’s Justus Nieschlag and Ward moved through into the leading charge. With Gomez hot on their heels in fifth spot on course, the men were running scared.

On the final lap of the run the Australian was out on his own and as he hit the blue carpet he began to celebrate the success of victory. Willian executed the perfect race and was awarded with the gold medal in a classy field of men.

“Had a good swim today, we rode really well and made sure I was at the front into transition. We know it’s a technical course so it was really important to get out in front. I started out in front and kept going and didn’t look back. I saw on the first lap that I had a bit of a gap and it kept getting bit bigger every time I checked so there was a lot of confidence there. I saw at the top of the hill that I had it and could really enjoy it and soak it up,” said Willian.

“It was amazing. After fifth place in Cape Town, I am really happy. It was a good fight. Running with Javier (Gomez), always a pleasure,” said Nieschlag

New Zealand’s Ward, raced proudly with a home crowd advantage, produced a strong race result to earn the bronze medal and was welcomed onto the podium for the second consecutive year.

“It’s amazing. Two years in a row, I was really going for that top step today. I am really happy to be on the podium today. The swim was so choppy, positioning was so important. The bike was a really honest bike course, it showed the pace was on. I knew (Javier) Gomez was close. I was prepared to go with him as long as I could and I managed to do that. The home town support was absolutely amazing, probably the best I have had,” Ward said.

The Spanish Olympian, Javier Gomez, showcased a strong result across the sprint distant format in New Plymouth and is motivated for the season ahead. There is no doubt that his sights are fixed on earning a spot on the Spanish triathlon team to represent at the Tokyo 2020 Olympics.

“It was fun, it was a really good course, especially on the bike. I really enjoyed it. I made a few mistakes. I went too far in T2 and had to turn around and had to put my bike in and lose a few seconds, which made me start a little too hard on the run. I just didn’t have much left on the last lap. It’s ok, it’s quite early for me in the season. It was a good racing experience again and hopefully I get better for the next ones. I love this race, the crowd is always spectacular. This course is even better than the old one,” said Gomez.

Ngamotu Beach, New Plymouth, set the scene for the third stop on the World Cup tour. Fields of experienced athletes lined up for battle, to attack the 2019 New Plymouth Triathlon World Cup. Conditions were ideal for race day, the ocean was whipped with a slight chop for the 750m ocean swim which was followed by a 20km technical bike course and 5km run, taking in the scenic roads of Taranaki. The 2019 world cup formed part of the Triathlon Festival with the New Zealand Schools Championships on the Friday and Saturday and spectator support lined the streets for the world class athletes.

In the women’s race it was no surprise that Australia’s Emma Jeffcoat, remaining true to her top ranking leading into the race, navigated the choppy surf-like conditions and led the field of women through the swim and out onto the sand, for the run up to transition.

New Zealand’s Sophie Corbridge was working hard to lead the way for the chase group, 8-seconds behind the leading women. Spain’s Carolina Routier was embedded in this chase bunch.

Estonia’s Kaidi Kivioja, was sitting in front seat of the third group, a further 26-seconds down on the race leaders.

The course in New Plymouth kept athletes honest as they took the turn to climb the hill, looped and made their way back down into the event precinct each lap, testing them physically and technically. Annen of Switzerland led the group of ten women into the corner and back into transition for the final lap of the bike course. Italy’s Angelical Olmo, Jeffcoat and Van Der Kaay pushed the pace and took turns out in front.

The same group of experienced cyclists stayed together as they took the final hairpin turn of the day and into their second transition, led by Hedgeland who was wearing the green and gold suit for Australia. Hedgeland, Jeffcoat and Annen produced the quickest transitions to hit the pavement for the final stage of the race.

The chase group entered transition with a 37-second gap on the front runners.

The lead group was made up of strong runners including Olmo, Van Der Kaay and the experience of Barbara Riveros from Chile and Tamara Gorman from the US triathlon team.

The battle was on and it was obvious that the podium spots would be awarded within this group of leading women.

Jeffcoat lost grip of the lead group in the last stage of the run and Van Der Kaay also pulled back the pace but held onto fifth position. The leaders made the final turn of the course and it was Olmo, Annen, Hedgeland and Gorman who were in charge together. With only three medals to award, the race for podium contention was not yet established.

Olmo finally made the bold move and extended a gap to lead by a few seconds. It was just enough to see the Italian storm onto the blue carpet to claim the gold medal, celebrating her first world cup victory and a career highlight on the coast of New Zealand.

Annen showcased exceptional form across all three disciplines today to be awarded the silver medal. Australia’s Hedgeland had the race of her career to cap the women’s podium with the bronze medal.

Gorman chased down fourth place and was thrilled with her performance and Jeffcoat crossed the line in fifth position.