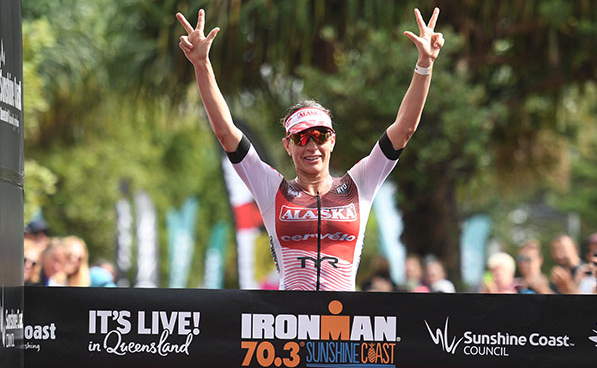 It proved a grand day for a mum and a dad at their favourite playground at the IRONMAN 70.3 Sunshine Coast. Tim Reed, father of two sons, returned to the course where he won a world championship title two years ago, unleashing his renowned running prowess to claim victory. Local resident Caroline Steffen recorded her first win since returning to the sport following the birth of her first child, and securing her third victory at this race.

A group of 12, including swim leader Clayton Fettell, three-time world champion Craig Alexander and Reed, grouped on the bike, with nine of them surviving to T2. It only took a short time on the run before Reed pounced with his lightening 1:10:04 run deciding the contest.

Alexander, at 45 years young, is enjoying somewhat of a renaissance in 2018 with two podiums and fifth at the Asia Pacific Championships. He showed that those running legs have not deserted him with his 1:11:06 enough for second ahead of a fast-finishing David Mainwaring.

Annabel Luxford, back after a podium at IRONMAN Switzerland, grabbed a handy advantage out of the swim before Steffen reeled her in midway on the bike, with the pair riding together into T2 after establishing a massive advantage over the rest.

Steffen pushed clear early but by midway Luxford had reduced the margin to 11 seconds and a pass seemed imminent. But the Xena Warrior dug deep with her 1:19:07 run enough to get the job done by just 35 seconds from Luxford with eight minutes to Kiwi Hannah Wells.

How To Run Further In Training | Increase Your Running Distance
August 1, 2018