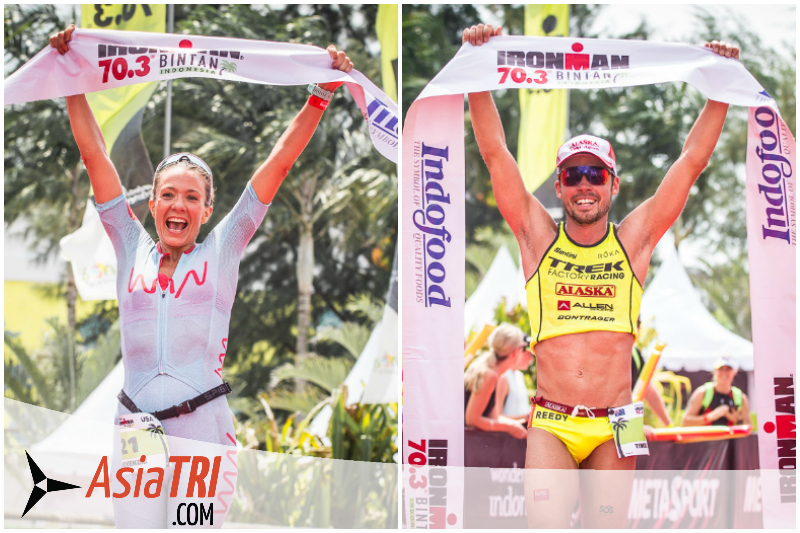 Bintan once again proved to be one of the best destinations in the Asian triathlon racing scene as Australia’s Tim Reed and American Beth McKenzie used their superior run strength to win the elite titles in the 2018 Ironman 70.3 Bintan.

Reed battled a small but competitive men’s professional field to win in 3:56:01, a 1 minute and 54 second winning margin over the defending champion Mike Phillips of New Zealand who finished in 3:57:55.   Matt Burton (AUS) overcame a slow start in the water to finish 3rd and grab podium.

“The atmosphere is great.   The course is tough, but its beauty is truly rewarding.  Mike Phillips is really a tough racer, he led the swim and was strong on the bike, fortunately I felt better than two weeks ago in Cebu, and paced it right to establish a lead in the run.” said Reed in a post-race interview.

Beth McKenzie followed up a respectable showing in Ironman 70.3 Philippines two weeks ago by winning the female elite title, finishing in 4:32:46.  McKenzie dominated the women’s field in the run, stamping the women’s best split of 1:24:18.  McKenzie won with a winning margin of 5 minutes and 59 seconds over Anna Eberhardt (HUN).  Eberhardt, who also finished 2nd last year,  finished in 4:38:45.    Sabrina Stadelmann of Switzerland had the 2nd-best run among the female pros to finish in 3rd place with a time of  4:41:04.

The 2018 IRONMAN 70.3 Bintan saw more than 1,200 athletes representing 39 countries start the race.  The event was awarded in 2017 as the Best Triathlon Race in Asia in the long course category.