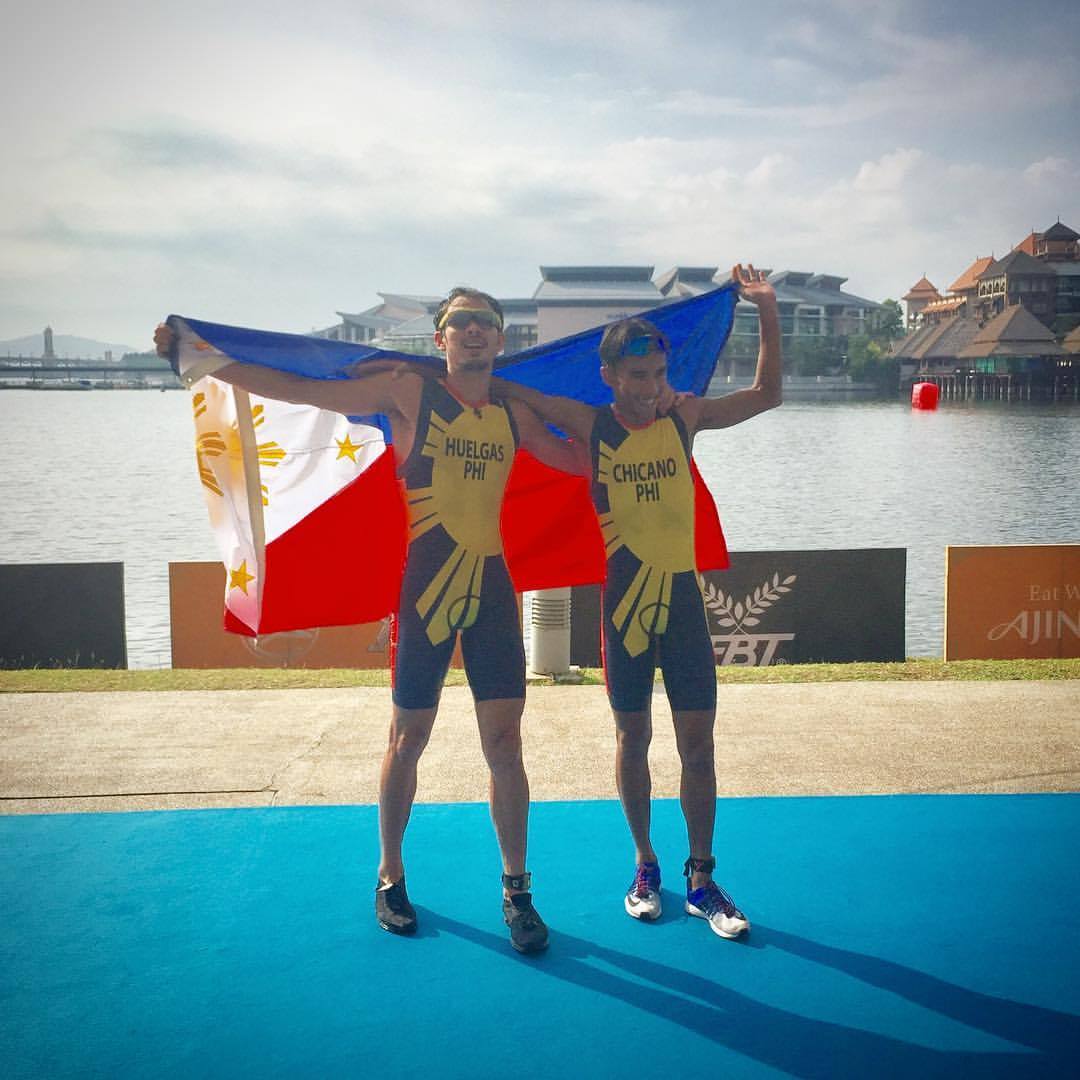 The Philippines’ triathlon team swept Gold-Silver in both men’s and women’s elite categories of the 2017 Southeast Asian Games.  Nikko Huelgas (PHI) defended his 2015 title as he beat fellow Filipino, John Rambo Chicano who claimed silver after missing the 2015 games.  Huelgas finished in 1:59:30, a 57 second winning margin over Chicano who finished in 2:01:27.  Singapore’s Clement Chow closed out podium by taking Bronze finishing with a time of 2:03:24.

In the women’s elite program, Kim Marion Mangrobrang used the strength of her women’s best run split of 42:20 to claim Gold in this 2017 games after taking silver in the 2015 games.  Mangrobang  finished with a time of  2:11:14, a 7 minute and 44 second winning margin over fellow Philippine national member Ma. Claire Adorna.  Adorna, the 2015 gold medalist, bags silver after finishing in 2:18:58.    Malaysia’s Irene Chong finished third in 2:25:44 to claim bronze.

Thailand’s Kritsanaphon Phonphai bolted out on the swim leg, exiting first in 20 minutes and 19 seconds.  A quadruple chase pack included Singapore’s Clement Chow and Indonesia’s Reza Novaris who both timed a 20:54 split.  Singapore’s Chuan Rong Loo exited in 20:55 while Huelgas followed three seconds behind in 20:57.

The duo of Huelgas and Chow was able to wrest the lead in the bike away from swim leader Phonphai, and they both posted the day’s best bike split at 1:00:00.  They entered T2 together, with the chase pack of Chicano and Loo a minute and 31 seconds behind. Huelgas immediately went to work on his pace on the run, dropping Chow on the first 2 kilometers.  Huelgas was never threatebed on the run on his way to defending his 2015 SEA games title.   Chicano posted the day’s best run split at 37:34 to secure his way to a silver winning SEA games debut.  Chow finished 3rd place bronze.

National-level swimmer Claire Adorna (PHI) was first out of the swim in 21:09, but teammate Mangrobang kept pace, going out just a second behind at 21:10. The chase pack of Malaysia’s Chong and Zoe Bowden went into T1 with a time of 22:06 and 22:13 respectively.

Kim Mangrobang went out of T1 into the bike course first after a faster transition with Adorna closely behind.  The Filipina duo led all the way in the bike course, exhibiting superior pedal strength.   Mangrobang finished the 40km bike course in 1:06:56, the women’s best split, followed by Adorna who timed a 1:07:01 split.

Mangrobang immediately served notice on the run and never looked, taking the lead for good in the first kilometer of the 10k run course.   Mangrobang again posted the women’s best run split of 42:20 to finish in 2:11:14.   Adorna, despite a 49:56 run split (4th best) was never threatened on her silver winning position finishing 2:18:58.  Chong (MAS) finished 3rd place bronze by finishing with a time of 2:25:44.