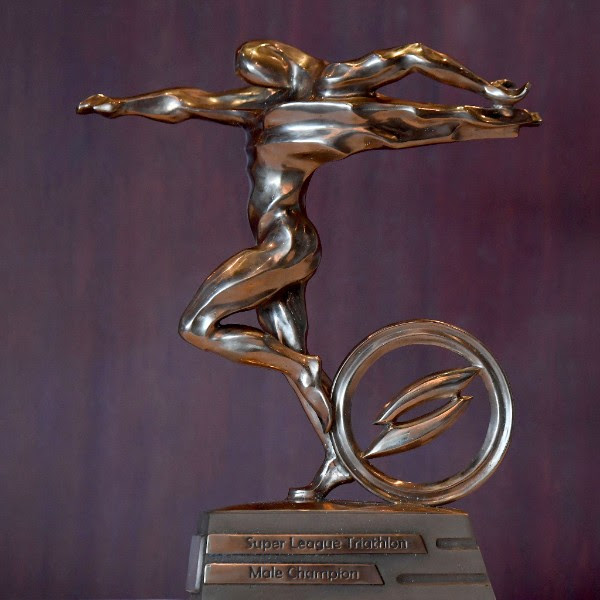 Stay tuned to AsiaTRI.com as we give updates on the Super League Triathlon race through our website and via social media.

A unique race series deserves a distinctive trophy for its winner to hold aloft. Super League Triathlon co-founder Leonid Boguslavsky today revealed the trophy to be awarded to the overall winner of Super League Hamilton Island.

The men’s trophy is a stylized figure of a man with its head and arms symbolizing swimming, legs in a running stance, and a wheel symbolizing cycling. Boguslavsky commissioned the trophy from Aleksander Litvinov, a sculptor based in Estonia.

“I did not want it to be a regular trophy which would look like a cup or a plate. I wanted to have it as a sculpture, that would combine our three disciplines of sport,” said Boguslavsky. He had previously received a sculpture by Litvinov of three girls playing tennis, with each figure representing one of the three stages of life. “I asked him if he could design the trophy for our Super League Triathlon based on my idea and he responded yes, he would love to do it.”

For Boguslavsky, the most challenging thing was how to incorporate all three disciplines of triathlon into one human figure. He said, “It was easy to put a figure of a runner and put a bike wheel, but how do you show swim? So my idea was to have something near the shoulders so that it could symbolically be recognized as water or waves, to have the head not high up so that it will appear to be like swimming, and to capture the swimmer’s stroke.”

The sculpture is 45 centimetres high and cast entirely in bronze. Boguslavsky wanted some heft and significance to the trophy. “I want the winner to have something solid to lift up.”

The trophy for the upcoming women’s series has also been finalized.

With the sculpture reminiscent of Mercury, messenger of the gods, this trophy will deservedly go to the fastest of them all.

​Super League Hamilton Island will be broadcast live on ​www.superleaguetriathlon.com​ on 17-19 March 2017 from 1700 AEST.