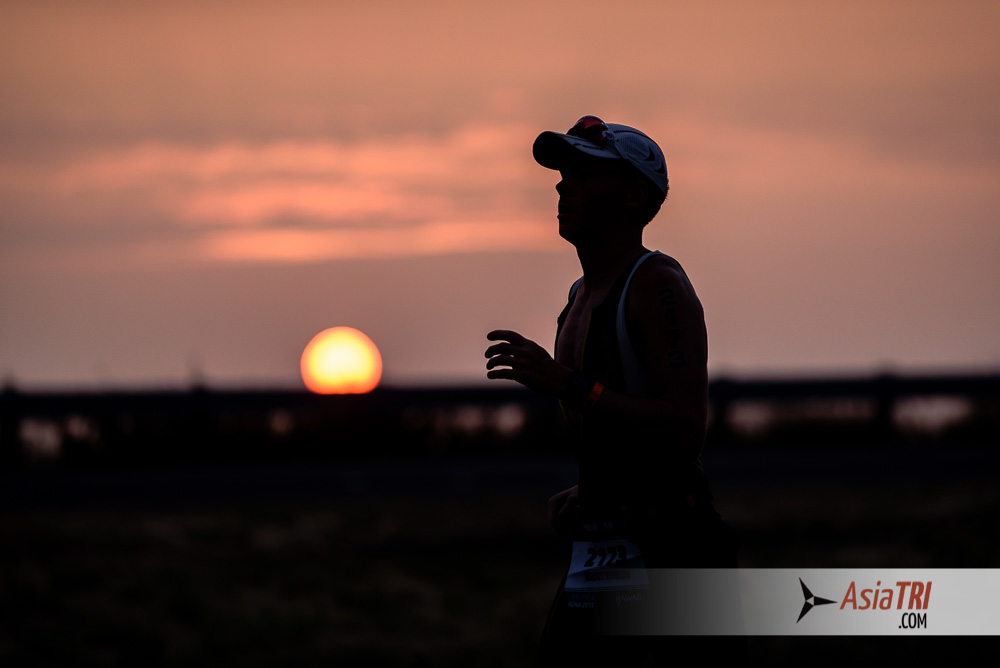 The Ironman World Championships, the mecca of long-distance Triathlon, is now on its 38th year in 2016. What began as a challenge on a table in a club in Hawaii has become an event that brings together more than 2,000 athletes from around the world, as well as supporters, admirers and the press. In October, all passionate triathlon enthusiasts turn their eyes to the island of Kona, the largest of the Hawaiian archipelago, to know who will be the next Ironmen. The first edition of the Ironman World Championships took place in February 1978, but was conceived a year earlier. Sports enthusiasts and competitors, the commander of the US Navy John Collins and his wife Judy talked in a socializing with friends and companions from the Armed Forces on an issue of the Sports Illustrated magazine that indicated Tour de France champion cyclist Eddy Merckx as the world’s best athlete in the category of form and fitness. They then got into a discussion about who would be the toughest: the swimmer, the cyclist or the runner? As the debate began to flow, Collins then toyed with the idea of combining the three toughest endurance events practiced in Hawaii in just a competition. It would be possible for someone to complete 3,800 meters of swimming the traditional Waikiki Rough Water Swim, then to 180 km of cycling the famous Around the Island Bike Race (originally held in two days) and end with 42.2 km in Honolulu Marathon?

The challenge was launched and the day of the race only 18 competitors appeared, and 3 also dropped at the beginning and the other 3 did not finish the path. Reports claim that Collins handed three sheets of paper describing the route and with some rules, and on the last page was handwritten: “Swim 3800 meters! Ride 180 km! 42.2 km run! Brag for the rest of your life! ”

Collins and 11 other courageous finished the race without imagining that at that time they were writing an important page of the sports world, in a few years would spread all over the world and garner millions of fans. The first Iron Man finisher was Gordon Haller, a taxi driver retired as Communications Specialist of the US Navy, which completed the journey in 11 hours, 46 minutes and 58 seconds. Collins completed the race in about 17 hours.

In 1979, the competition was hampered by bad weather, but it was still an important issue for the dissemination of the Triathlon and the Ironman Hawaii. That year, the reporter from Sports Illustrated Barry McDermott was on the island to cover a golf tournament ended up writing a story of 10 pages for the magazine about the Ironman competition. Of the 15 athletes participating, the rider Lyn Lemaire was the first woman to take the challenge and as the  first Ironwoman in history, presented a great performance to remain in second place for much of the route.  Lemaire finished in 5th place overall, with a time of 12:55:38. The Californian Tom Warren was the winner with 11:15:46.

The publicity brought by the coverage of Sports Illustrated made the ABC station to ask Collins the permission to record the Ironman scene in 1980 in the “Wide World of Sports” program. With the presence of the press at the event, the number of competitors has risen to 106 men and two women. Dave Scott, 26, won the race in 9:24:33, and the winner of the women’s category, Robin Beck, was in 12th place overall, with a time of 11:21:24. From then on, the Ironman was beginning to stand out in the sports scene. In 1981, the race has moved from the bustling Oahu area to the peaceful Big Island of Kona, where it remains until today. The Ironman has become the benchmark in a single day human endurance sport.  It was this moment that took place one that became the most iconic scene of Ironman Triathlon; and it involved university student Julie Moss. Working as a lifeguard, it helped Moss to be in the lead in swim.  Combined with a strong bike leg, she opened a big lead in the marathon leg.  With just a few kilometers between her and the finish line, Moss began to feel the symptoms of bonking. When she could almost smell victory, she was overtaken by Kathleen McCartney in the smallest margin of victory in the history of Ironman Hawaii: only 29 seconds. Moss struggled with extreme fatigue and dehydration in the last 100 meters, falling and rising, until she crawled her way to reach the finish line.  It was the “viral video” of ironman triathlon during those days. The winner of the race was Scott Tinley, with a time of 9:19:41 and Walt Atack, 73, set the record for most time to take 26 hours and 20 minutes to complete the route. In 1982, after the event in February, the organization decided to repeat it in October.  Since then, this has been the preferred month for athletes from countries where the climate is cooler and could adapt better to the weather conditions of Kona. Also introduced was the maximum time of 18 hours test. Dave Scott won the edition with swimming record (50:52) and overall time (9:08:23)

And since then, Scott has not stopped surprising. In 1983, he beat his own record by completing the race in 9:05:57. The Canadian Sylviane Puntous won the women’s category and also set the race record in 10:43:36. In this same year, the eligibility criteria have been defined and the cut-off time was reduced to 17 hours.

The 1984 edition was historic and full of records. Scott again excelled to break the barrier of 9 hours of race (8:54:20). Sylviane Puntous also won again, beating his own record (10:25:13) and the Ironman Hawaii also broke the record for participants, surpassing the 1,000 athlete barrier. The end of the event in 1989 brought excitement to the triathlon world when Dave Scott and Mark Allen battled inch by inch in the famous “IronWar”.  Allen broke off in the final meters and won by only 58 seconds.

In 1990 the World Triathlon Corporation was created with the purchase of the Ironman brand by veteran Jim Gills. Thus, the route was changed to the southern part of Alii Drive and along the Natural Energy Lab of Hawaii Road. The following year, the race would have new record of participants reaching 1,312 athletes.

In 1992, Mark Allen won for the fourth consecutive time and hit again the record (8:09:08) while Paula Newby-Fraser finally broke the barrier of 9 hours in the women’s competition with 8:55:28.

Mark Allen was consecrated in 1993 and five-time champion Paula Newby-Fraser equaled Dave Scott in six titles, even surpass it the following year. In 1994, the Australian Greg Welch won and Jon Franks became the first wheelchair competitor in the history of Triathlon. Allen returned to the podium in 1995 after a year away from competition and Karen Smyers broke the sequence of Newby-Fraser wins.

In 1996, the Belgian Luc Van Lierde was the first European to win the Ironman world title and Newby-Fraser athlete returned once again to the podium. Van Lierde finished in  8:04:08, a record that lasted until 2011. In 1997, the categories of para-triathletes were opened and the world watched, for the first time, a super cyclist win on the Big Island: Thomas Hellriegel (GER) was the champion and the podium was 100% German, which also included Jurgen Zack and Lothar Leder.

In celebration of 20 years of Ironman Wold Championships in 1998, founder John Collins returned to the field of competition and finished the course in 16:30:02.  The first Ironman finisher, Gordon Haller, finished in 14:27: 01.   Six of the top 15 athletes of 1978 participated in the 20th year reunion.

See also:  A Look Back at the Ironwar: Mark Allen vs Dave Scott

The Canadian Lori Bowden broke the women’s marathon record in 1999, finishing the stage in 2:59:16. Luc Van Lierde won the men’s race (8:17:17) and Lyn Brooks became the first athlete to complete the 20th consecutive Ironman in Kona. In 2000, the wind and weather conditions hampered the competition, causing some athletes to even dismount the bike.  Peter Reid (8:21:01) and Natascha Badmann (9:26:17) won their second title. 2004 was the year of another German super cyclist entering history. Normann Stadler won his first title with the bike leg record while Badmann conquered his fifth trophy. In 2005, Faris Al-Sultan was the third German to win in Hawaii (8:14:17). Robert McKeague, 80, was the oldest athlete to cross the finish line of the Ironman (16:21:55) and Sarah Reinertsen the first woman amputee to finish the race (15:05:12). That year, Natascha Badmann won his sixth and final title.

In 2006, Normann Stadler won with the new bike record (4:18:23) and took the podium with Michellie Jones (9:18:31), an accomplished Olympic athlete.  The following year, in his seventh participation in the Ironman World Championships, Chris McCormack (AUS) finally won (8:15:34) in the same year that Chrissie Wellington has the second best female marathon history of the competition, competing for less than a year as a professional, and winning it in 9:08:45. 2014 was the year of German dominance in men. Sebastian Kienle won and bucked the odds with a combination of strength in cycling and running. In a surprising performance, Ben Hoffman of the USA made the race of his life to stay in second place.Finishing third was the pre-race favorite Jan Frodeno. After two flat tires and a penalty, he still went to the third. In the women’s race,   Daniela Ryf (SUI) led the race until km37 when she was overtaken by multiple champion Mirinda Carfrae. Rinny overtook a 15-minute difference with an absolutely incredible finishing run.

2015 marked the year for the first time, an Olympic champion was crowned World Champion Ironman and Ironman 70.3, the last two in the same year. German Jan Frodeno was the dominant force, without being threatened during the marathon. The surprise of the day was the veteran Andreas Raelert (GER), who returned to second place in an inspired day. In the full delight of the American crowd, Tim O’Donnell, the great local hope, finished third.  Swiss Daniela Ryf had the same superb year with Frodeno, winning both Ironman and 70.3 World tiltes. She left British Rachel Joyce once again in second place and Australia’s Liz Blatchford in 3rd.  Mirinda Carfrae abandoned the race in the bike leg, but optimistic to regain her title in 2016. Setting foot on the island of Kona is a dream for many athletes. The Ironman Hawaii brings exciting clashes between elite professional triathletes who compete on the same ground at the same time that other age-group triathletes move us with examples of achievement and motivation.  Every year, the participation magnifies in the island of Kona in October.  New ironmen will rise to the finishline, continuing the legacy started by visionary John Collins and 15 brave men who in 1978 accepted the challenge and took the first step of this great history, which continues in 2016.

Roka rises to the Top