The crowd goes wild as records were smashed at IRONMAN Austria.

by Volker Boch for ironman.com

History can be made at any moment, and after a much slower swim than predicted, experts couldn’t have predicted that such a close race could occur at the 18th IRONMAN Austria. When the winners were awarded, everyone was convinced that they had been part of something special in Klagenfurt. In the end, Marino Vanhoenacker (BEL) and Mirinda Carfrae (AUS) came out on top.

History in the making

The men’s swim in the Lake Woerthersee was remarkably slow. Brazil’s Thiago Vinhal was the first pro athlete to exit the water in 52:34. Compared to previous years the swim was about six minutes slower. But this didn’t really bother Vanhoenacker. The seven-time champion was in third place after the swim, four seconds behind the lead and seemed to be pretty relaxed. Although there had been rumor about another record breaking day in Klagenfurt, Vanhoenacker concentrated only on his main goal: his eighth win here. Last July, Ronnie Schildknecht took his eighth win at the IRONMAN Switzerland being the first athlete ever to celebrate so many victories at one single event.

When Vanhoenacker started the bike ride, he looked and felt super comfortable—thanks to some extraordinary weeks of training. A strong trio immediately started into an offensive breakaway under his regency. Vanhoenacker, Antony Costes (FRA) and the Austrian IRONMAN rookie Paul Reitmayr put two minutes only on the first 20 kilometers on the chase group. After 40 kilometers the gap was four minutes, when they hit the 90-km-mark, the lead was five minutes. Vanhoenacker executed a solid game plan—he didn’t over-pace and he waited just the right amount of time before he made his move with 30 kilometers to go on the bike. On the final section of the course he was able to drop Costes and Reitmayr by four minutes. While 2015 runner-up Michael Weiss was about five minutes down in T2, strong runners like Bart Aernouts (BEL), three-time Klagenfurt champ Viktor Zyemtsev, David Plese (SLO), and Alessandro Degasperi (ITA) were more than 10 minutes behind.

Vanhoenacker knew that he might feel the effect of the fastest bike ride of the day later in the run. He knew that he would have to suffer, but he didn’t show a single vulnerable point. Weiss attacked hard to get into second place after 16 kilometers, but he wasn’t able to make any time on Vanhoenacker. Zyemtsev passed Weiss with 17 kilometers to go and shortly before the finish, Degasperi did so too. But no one had a chance to touch Vanhoenacker on his way into the history books with a 8:04:18 finish.

Even Carfrae didn’t seem to have the best chance to pull off an extraordinary race after exiting Lake Woerthersee. 59:15 in the water isn’t considered fast, but the Australian needed only a few kilometers on the bike to take over the lead. After 20 kilometers she was in front and started hammering through the course. It may have surprised spectators that Carfrae had the best bike split and secured this impressive win with a great cycling race, but this was exactly the performance she needed to put herself back on track again after dropping out at the IRONMAN World Championship last October as the defending champion.

After 120 kilometers the strong Austrian Michaela Herlbauer was only three minutes behind and seemed to be strong enough to downsize the gap further, but just the opposite happened. Carfrae had put together a comfortable six minute lead when she started on the run. Thanks to her great bike split the course record of Linsey Corbin seemed not too far-off for the 35-year-old. Breaking the 8:42:42 barrier Carfrae had to run a 2:50:31. And she delivered. The Australian nailed a 1:23 half marathon which was the door-opener to one of the fastest marathons in IRONMAN history and to set a new course record in front of a crazy audience. “I didn’t think that this would be possible today,” said Carfrae. Runner-up Herlbauer stormed under the 9-hour-line while Elisabeth Gruber celebrated a third place finish.

Andy Potts and Heather Jackson made it look easy in their wins at the inaugural IRONMAN 70.3 Coeur d’Alene.

Josh Amberger (AUS) and Andy Potts (USA) were the first to scamper up the beach together with Christian Kemp (AUS), Mark Bowstead (NZL), and Luke Bell (AUS) following 30 seconds later.

It became evident early in the bike that Potts, Amberger, and Bowstead were the top class of the field on the day in Idaho, as the remainder of the field were going in reverse. Heading into T2, Amberger jumped off his bike first with Bowstead and Potts following him into the transition just seconds later.

Early into the run Potts moved to the front of race while Amberger and Bowstead continued to follow closely behind. Potts bumped his lead to over a minute on his two pursuers by the first half of the run. With Potts’ familiar race strategy of keeping the field close on the bike, surging to the front early on the run, then putting out enough effort to clinch the win in a comfortable fashion he was able to pull off a victory in Coeur d’Alene. Potts executed this winning formula to a “T” in his victory over Amberger and Bowstead who both celebrated podium finishes on the day to the season veteran.

Jackson impresses on the bike

Haley Chura (USA) returned to racing and showed she hasn’t lost anything with her usually strong swim. She had two minute leads over Ellie Salthouse (USA) and Kelly Williamson (USA). Race favorite Heather Jackson (USA) found herself three and a half minutes off the pace, however, she now had her two strong suits left to play in her favor.

By 20 miles, Jackson had eliminated her deficit and started to quickly pad her lead at an alarming rate to the rest. By the time she reached the 30 mile marker, Jackson had a three-minute lead on Salthouse and stretched that advantage to over six minutes at the completion of the 56 miles.

Putting her race in cruise-control, Jackson clicked off the miles with a smile on her face for the spectators that lined the course. At the completion of the 13.1 mile run Jackson had built up an eight-minute winning advantage on Salthouse, as Malindi Elmore (CAN) snagged the best run on the day and was rewarded with a third place finish.

by Shawn Skene, Photos by Wagner Araujo of Mundotri.com.br & asiatri.com

Antoine Jolicoeur Desroches (CAN) was first to exit the waters of Lake Tremblant in 22:56 with Barrett Brandon (USA),  Jarrod Shoemaker (USA), and Paul Mathews (AUS) just seconds back to the leader. All eyes were on the race favorite Lionel Sanders (CAN) and how large his deficit would be at the end of the swim. It would be close to three and half minutes before Sanders would emerge from the swim in 13th place, but well positioned considering his run and bike prowess. 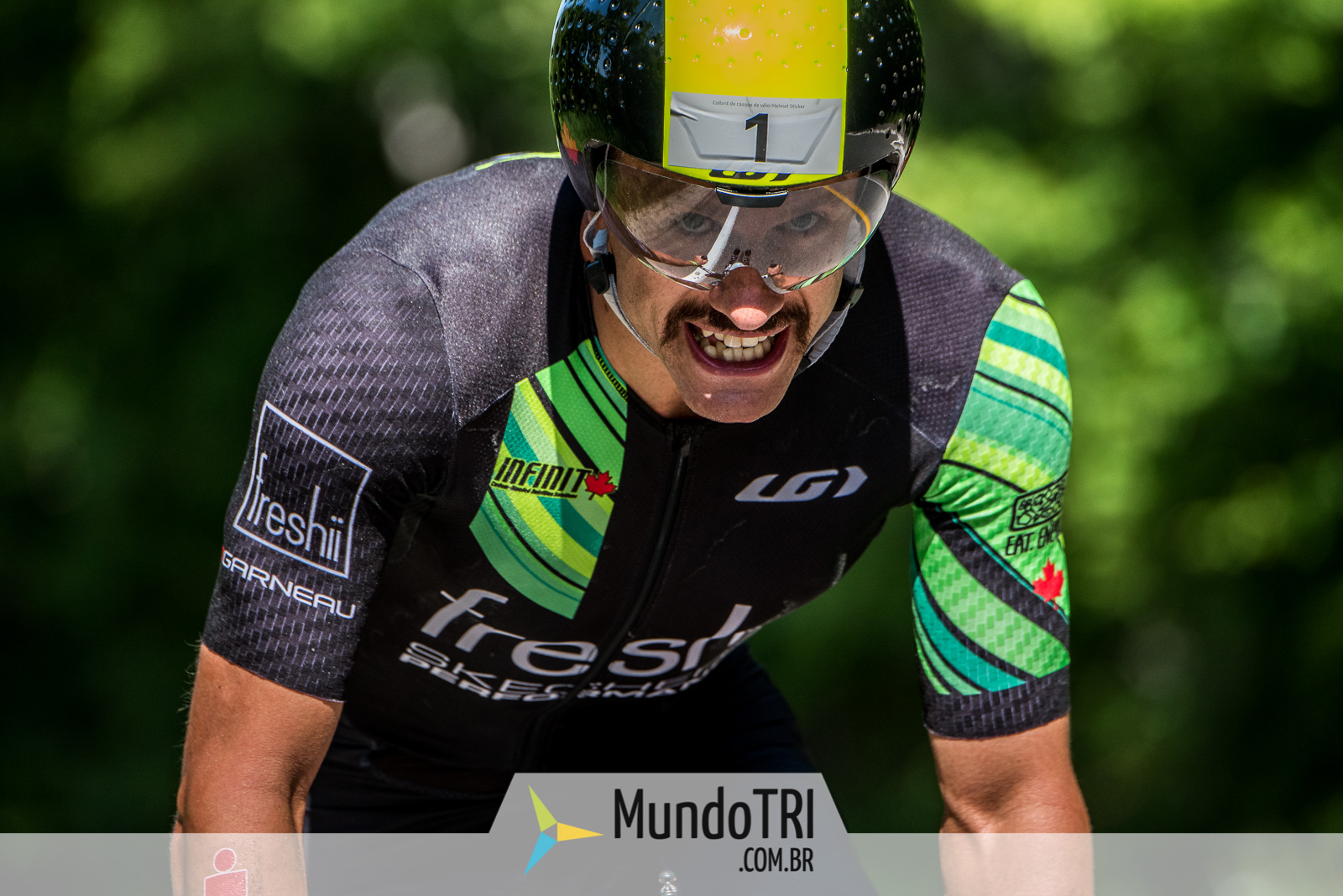 In the early going on the bike course, Sanders started the process picking off competitors in front of him while Desroches remained the leader. Chris Leiferman (USA), Trevor Wurtele (CAN), Mathews, Taylor Reid (CAN), and Shoemaker were biking within three minutes of the front of the race and waiting for the Sanders train to arrive.

As expected, Sanders made his way to the lead at 40 km’s and then put the hammer down big time and managed to out bike the field by close to five minutes. The Canadian dismounted his bike with a +3:32 on Leiferman, +4:41 on Desroches, and +4:44 on Wurtele.

Only the heat of the day would cause Sanders to squander his lead on the run and scenario failed to materialize. Laying down the race best run on the day netted Sander his fifth IRONMAN 70.3 win of the season in a winning time 3:47:24. Wurtele continued to display he has upped his game in 2016 with a impressive second place showing on the strength of his solid swim and bike and and backed those up with blistering run in the heat.

Lauren Brandon (USA) had 30 second leads on Holly Lawrence (GBR), and Merdith Kessler (USA) at the completion of the single loop swim. Contenders Magali Tisseyre (CAN) and Heather Wurtele (CAN) were facing manageable two minute deficits as they scurried into transition to gather their bike.

It was the “Holly Lawrence Show” on the bike as she put on an unmatched performance on two wheels. Lawrence out-biked here closest rival by close to six minutes that netted her a leads of +7:35 and +10:27 on Kessler who are no slouches on the bike.

Showing no signs of letting up, Lawrence continued her torrent pace on the run and left the field to fight it out for second and third. With the race best run thrown down by Lawrence she handily won the race by over eight minutes over Wurtele who hung on for second. Lauren Barnett (USA) strong run garnered her a third place finish.