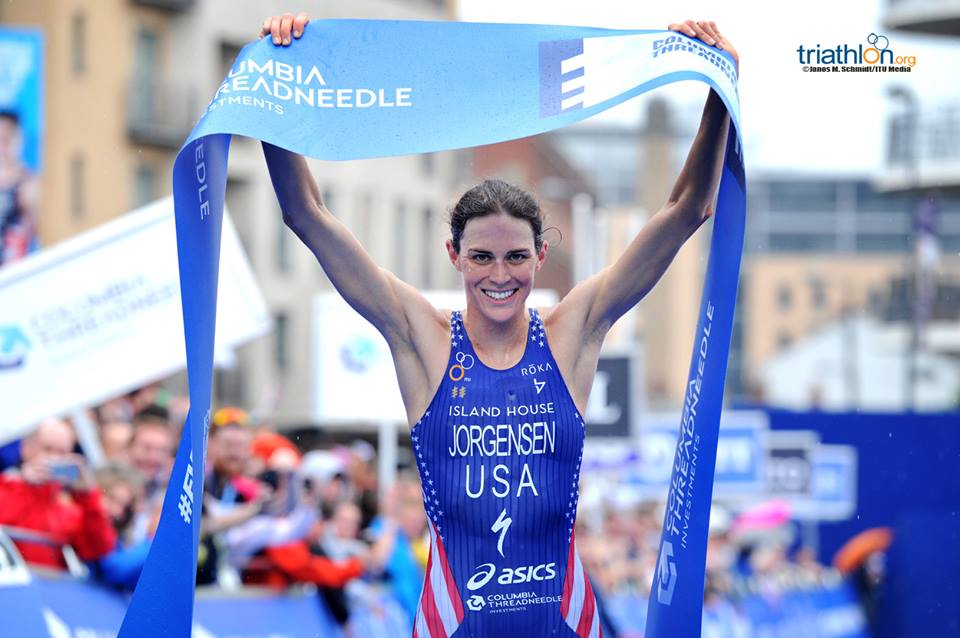 Making its debut on the World Triathlon Series family, the 2016 Columbia Threadneedle World Triathlon Leeds event was beyond successful as USA’s Gwen Jorgensen claimed her 17th career WTS victory and Alistair Brownlee became a hometown hero as he captured a win in his birth city. The debut of the 2016 Columbia Threadneedle World Triathlon Leeds on the WTS circuit did not disappoint as yet again Gwen Jorgensen succeeded at executing a come-from-behind run to seize the first-ever Leeds title. The victory was the second consecutive win for the American and her 17th WTS gold of her career.

After being down 1:40 at the second transition, Jorgensen was able to overcome from the largest deficit in the history of the WTS to capture her win.

Earning the silver medal was Bermuda’s Flora Duffy, who executed a massive attack early on the bike to gain a lead that was insurmountable to anyone but Jorgensen. She was followed over the finish line by Great Britain’s own Vicky Holland.

Starting the Leeds swim course with a podium start, a small field of only 33 women lined up for the fifth stop of the 2016 World Triathlon Series season.

Great Britain’s own Jessica Learmonth and Lucy Hall quickly became the leading two, impressing their home nation crowds just off the start. Duffy was also aggressive in the water and remained right on the feet of the two Brits. After the first lap, the three led a group of about nine women including Jorgensen, Sarah True (USA) and Holland to create a reasonable gap in the field that carried them into the first transition zone.

But despite a tight transition, it was Duffy, Learmonth and Hall that were able to get out onto the bike first. From that point the three never held back. The trio charged forward together and immediately created enough distance to hold off the chasers behind them. While another bike trio of Jorgensen, Holland and Emma Moffatt (AUS) were able to ride together for the first lap, they were eventually caught by 11 more riders, which included Andrea Hewitt (NZL) and Jodie Stimpson (GBR).

In front of a home crowd and on the streets where he was born and raised, Alistair Brownlee (GBR) scored the first-ever 2016 Columbia Threadneedle World Triathlon Leeds title and his first WTS victory of the season.

After executing a flawless day of performances across the swim, bike and run, Alistair enjoyed the moment grabbing the winner’s tape and celebrating the win with his home town in an uproar.

Joining in on the celebrations and a spot on the podium, was his younger brother Jonathan Brownlee, who raced side-by-side with Alistair up until the run. Rounding out of the medal count was Aussie Aaron Royle, who took home the bronze.

With ideal English conditions that included the slightest bit of rain, the men took to the pontoon to kick start the first-ever WTS men’s race in Leeds.

Having also been familiar with the conditions after training in Leeds for some time, it was Richard Varga (SVK) who led in the water over the entire 1500 metres and into the first transition zone.

As the men exited the transition zone and began the bike leg, it looked as though two groups of three athletes were going to form. Alistair, along with Royle and Aurelien Rapheal (FRA) immediately joined as the leaders while a trio containing Jonny, Javier Gomez Noya (ESP) and Varga were a short distance behind. But with the idea of racing in their hometown streets being used as motivation, Alistair slowed down to allow Jonny to push ahead and join the lead to create a top foursome.