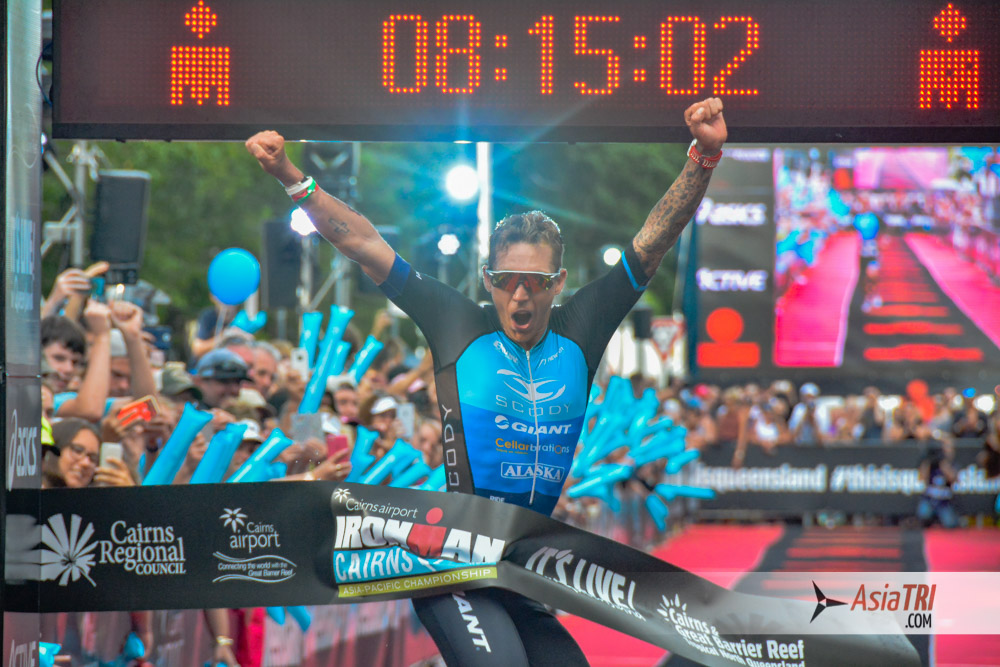 One stormed clear and held on for dear-life while the other forced his way through on the run, as Britain’s Jodie Swallow and Australia’s Tim van Berkel claimed the honours at the IRONMAN Asia-Pacific Cairns Regional Championship.

Swallow, who made a late call to race after crashing out in South Africa recently, pushed out to a lead of over 20 minutes following a record bike leg on a wet and humid day. Ultimately she had to hold on as the wheels began to wobble, easing her way to the victory in 9:06.17 by 6min 32sec.

“I was really smashed mentally, I pulled it together in the last 10km I stuck in there, I really wanted it and I managed to hold Linsey off with the fast charge that she had but wow she really made me work hard,” she said.

Meanwhile van Berkel played a waiting game, and when the opportunity presented itself, he sliced his way through on the back of a 2:46 marathon run to win in 8:15:02, just two seconds inside the course record of compatriot David Dellow, who was runner up.

“It feels great to finally get a win and for it to be an Asia-Pacific Championship I am absolutely stoked,” he said. “It feels awesome. I worked so hard for this race and to finally put all that work to use and come in with a win, I’m just soaking it in. Against a world class field, there were some fit guys in there, and I was really hurting on that bike and I knew I had some work to do so I just put my head down and chipped away at it.”

Van Berkel no longer the bridesmaid

It has been a long time between drinks for van Berkel whose sole IRONMAN victory came way back in 2008. While he is one of the best athletes over the IRONMAN 70.3 distance, it has been close without success over the longer distance.

“Finally. I am over the moon. I really can’t believe it. I am lost for words. So many second places and to finally get a win and get an Asia-Pacific title, I am really stoked,” van Berkel said.

He was a minute back in 10th out of the water, where pre-race favourite Luke McKenzie led an Australian blitz as the sea-swells caused some issues with the likes of Americans Jordan Rapp and Matt Hanson who were a distant nine minutes back.

McKenzie, Clayton Fettell and Pete Jacobs formed the attack off the front on the bike that met with wet conditions towards the resort of Port Douglas. McKenzie, the two-time winner in Cairns, pushed the pace on the way back into the head winds before a puncture 18kms from T2 wrecked his hopes, losing 10 minutes to Fettell and former Olympic rower and professional cyclist Cameron Wurf, in his professional debut.

Fettell held on for as long as he could until he ran out of fuel, while Wurf and then McKenzie faded on the marathon. That allowed the runners to emerge from behind where van Berkel was the best to force his way to the front followed by Dellow and the 2012 World Champion Pete Jacobs. Dellow withstood some cramps to finish second and Jacobs claimed his first podium in several years in an all-Australian podium. Cairns was not on the radar for Swallow until a crash on the bike at South Africa recently forced a hasty change of schedule.

The British athlete is a former ITU Olympic star, the IRONMAN 70.3 World Champion in 2010 and a former ITU World Long Distance winner. The 34 year old has enjoyed two IRONMAN wins and was fourth in Hawaii two years ago.

“I couldn’t believe how much support there was out on the bike, it wasn’t the most perfect day for spectators so for all the people to make the effort to come out was great. They see sport as something inspiring and I’m just glad to be a part of it and I’m so glad I get to do it as a job,” she said.

She countered the challenging conditions to lead out of the water by more than three minutes to Australian Rebekah Keat before setting about to demolish the women’s field with a whopping bike record of 4:50.39 that saw her 13th overall at T2.

Behind her Keat remained solid but the push through from Linsey Corbin, a multi IRONMAN winner and one of the pre-race favourites, was dented with a crash on the hills out of Port Douglas and then a five minute drafting penalty.

Australian Sarah Crowley took advantage to push through to second place but with a 21 minute deficit to the Brit on to the run. At the halfway mark Crowley and a revitalised Corbin were second and third some 18 minutes back, before Swallow began to teeter over the closing laps, holding on eventually and collapsing across the line in 9:06.17.

The American scored huge credit for the second placing 6:32 behind the winner with Crowley claiming third a further seven minutes in arrears. On a tough day Kiwi Michelle Bremer was fourth with Keat fifth, some 38 minutes behind the winner.