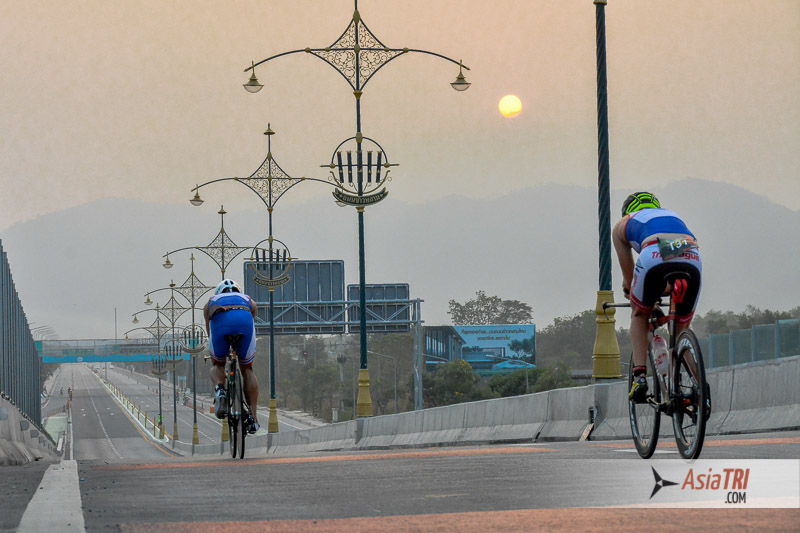 The inaugural Bangsaen Triathlon was also the opening race of the 2016 Thailand Tri-League Series, Bangsaen is located only 60min drive from Bangkok International Airport and a famous beach getaway for the locals.

While the organizers, Sportmaster is relatively new to triathlons with less than one year experience, one would presume this event was at least on its 10th edition as it had the feel and look of any world class event one could expect. It’s important to say that Sportmaster has experience organizing big events in other industries such as the Pattaya Music Festival which attracts over 1 million people and they also have the political backing of the locals to assist with road closures and plenty of local staff to support the athletes.

Bangsaen Triathlon is now a highlight of the Asian Triathlon calendar due to its convenience, fun and safe course and well ran race. Other than the main Olympic Distance race, athletes have the option of a Sprint Distance Triathlon (750m swim/24k bike/6k run) and a Duathlon (6k run/40k bike/10k run). They have set the bar very high to win the 2016 Best inaugural triathlon of the year. The next event in the series is the Pattaya Triathlon on May 21st winner of the 2015 Best inaugural race of the year.

The L-Shape swim of 2x750m loops, had lane ropes all along the course and included a second inside loop for athletes that were on their second loop, that avoid traffic when overtaking the beginner and slower swimmers. The starting waves were by swim ability with the Elites going first, then in swim pace brackets, up to 1’45″/100m pace, then the following wave 1’45 to 2’15” per 100m pace and so on. Another important comment was regarding safety, there were plenty of support all along the course, with jetskis, rescue boats and kayaks. Athletes also the pontoons to rest on if they decided to take a break. This made very comfortable for beginners and a fair race for experienced athletes that had clear waters to swim at After an initial 2km through town, the bike course took the athletes to one of the highways, fully closed to traffic which made a very safe and fast ride. Athletes would then ride 2 loops of 18km before heading back to transition area. The course is mostly flat, only with a few overpasses per lap, making it 12 short climbs in total, a nice break from the time trial position and also added variety to the course. It was relatively windy which made it very challenging on the way out of town, but much easier into town, this is important to know as you may want to take appropriate gearing for the event, I don’t recommend compact cranks for this race at preferably a 11t cog in the back to avoid over-spinning down the overpasses and on a tail wind.

Drafting wasn’t an issue since athletes had plenty of space to spread out and there were also enough marshalls on the course.

Unlike many races in Thailand, the temperature was mild (high 20’s celcius) with plenty of shade and aid stations. The course was also very straight forward and well marked with plenty of staff to show the way. The first 3km was an out and back section along the walking street of the main beach just past transition area and the hosting hotel (Bangsaen Heritage Hotel). From the 5km to the 8km mark, athletes ran a hilly section named “monkey zone, for 3 kilometers it was either up or down with very little flat sections, make sure you train accordingly, consider a treadmill as a training tool to simulate the ups and downs of race day. The 2 final kilometers were again flat, from the Monkey Zone back to transition area and finish area through town (not an out and back course), which made this fun as you couldn’t tell where the competitors behind/ahead of you were.

Enjoy your training and see you in Bangsaen 2017!

113 Series ready to kick-off in Malaysia