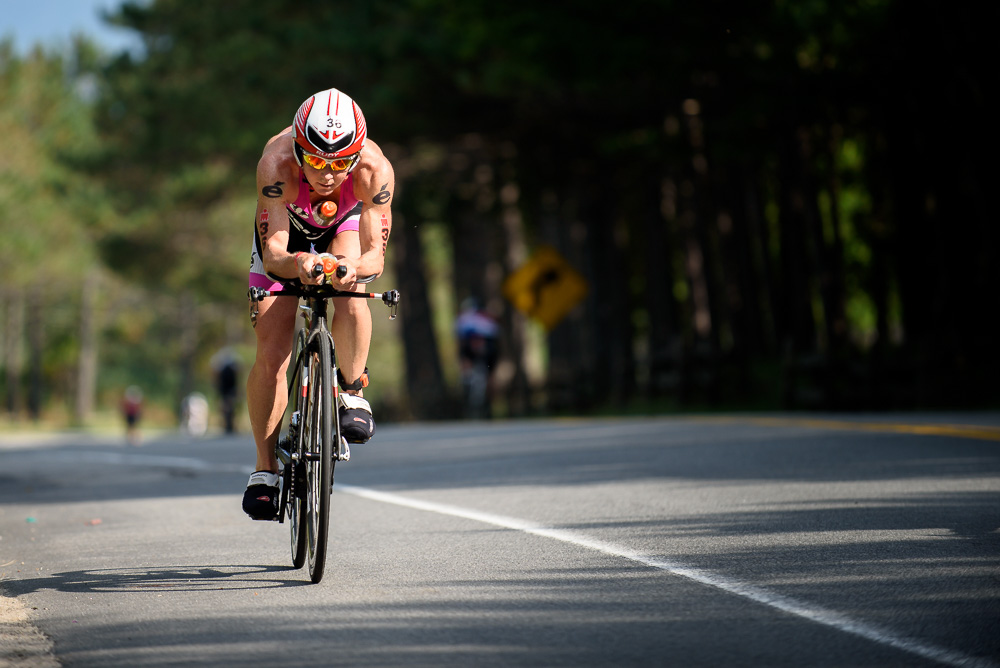 It was in a highly charged atmosphere that Jordan Rapp, USA, and Mary Beth Ellis, USA, were the first to cross the finish line today at the Subaru IRONMAN® Mont-Tremblant triathlon. A total of $100,000 in professional prize purses were distributed along with 50 coveted age-group slots to the 2015 IRONMAN World Championship presented by GoPro, taking place on Oct. 10 in Kailua-Kona, Hawai`i.

Brian Fleischmann (USA) showed the men out of water of Lac Tremblant with his 49:16 swim time. Eric Limkemann (USA) was next, less than a minute later, while Paul Ambrose (AUS), Jordan Rapp (USA), and Justin Daerr (USA), ran up the beach with deficits ranging from +1:41 to +2:24. Pre-race favorite Lionel Sanders (CAN) was out of the water +7:12 off the pace and would normally be in his element on the bike and run.

Once on the bike, Rapp put the hammer down and forged his way to the lead by 25 km’s. It was evident that Rapp brought his A game to Canada as he managed to continue to pad his lead over the entire field at each checkpoint. Behind the leader, Ambrose, Limkemann, Daerr and Sanders shuffled positions throughout the bike. Sanders would suffer a flat tire and then a jammed chain that cost the Canadian two positions and an additional six minutes added to his deficit by the time he got his bike back on the road. Coming into transition, Rapp’s race-best bike split would net the 35-year-old +11:32 on Ambrose, +12:12 on Limkemann, +16:47 onDaerr, and +19:54 on Sanders.

It was much the same story on the run as no one could match Rapp’s pace as he built on his lead throughout the whole marathon. Ambrose would falter early and tumbled in the standings to fifth, while Daerr and Limkemann duked it out for second and third. Sanders seemed to never quite find his rhythm on the run and couldn’t get any closer to Rapp than 17 minutes—however, at one he time managed to pull himself into third overall when Limkemann and Ambrose slowed. But all was for naught as Rapp’s fastest run on the day propelled him to the finish line in first by a winning margin of an incredible +18:35 over Daerr and +20:35 on Ambrose (who clawed his way back  into a podium finish after sinking to fifth earlier in the run).

Mary Beth Ellis (USA) was a powerhouse in the water clocking a 50:22 swim time. Liz Blatchford (AUS) and Tami Richie (USA) were next into transition less than two minutes later, with Karen Thibodeau (CAN) just over two minutes off the pace.

Blatchford would be the only one to come even remotely close to matching Ellis’s pace on the bike, and she was left staring at a +9:46 disadvantage at the completion of the two-loop bike course in Mont Tremblant. Sarah Piampiano (USA), Laura Siddal (GBR), Lisa Roberts (USA), and Jessie Donavan followed the leader off the bike well over 20 minutes in arrears.

Roberts would be the biggest mover on the bike and would run her way into third early on the run. Meanwhile, Blatchford would chip away at Ellis’s lead, but the time difference wasn’t large enough for the first half of the run. In the last 21 km’s, Ellis’ lead dropped at a faster pace, but her lead never appeared to be in jeopardy until the last two km’s when her lead was reduced to less than a minute.

It was on the strength of her gutsy performance that Ellis captured the title in Mont-Tremblant for the second time in her career. Blatchford came up a mere 51 seconds short of catching the winner, while Roberts’ fastest run earned her a place on the podium.

Of the approximately 2,600 registered athletes, more than 45 percent were Canadian, with 25 percent from Quebec. Athletes from 27 different countries were registered to compete, with the largest number coming from the United States, followed by Canada. The most represented age group was between 40 and 44 years-old. Participants ranged in age from 18-75. More than 40 professional athletes took part in the race and more than 3,000 volunteers were on site to ensure the success of this prestigious event.