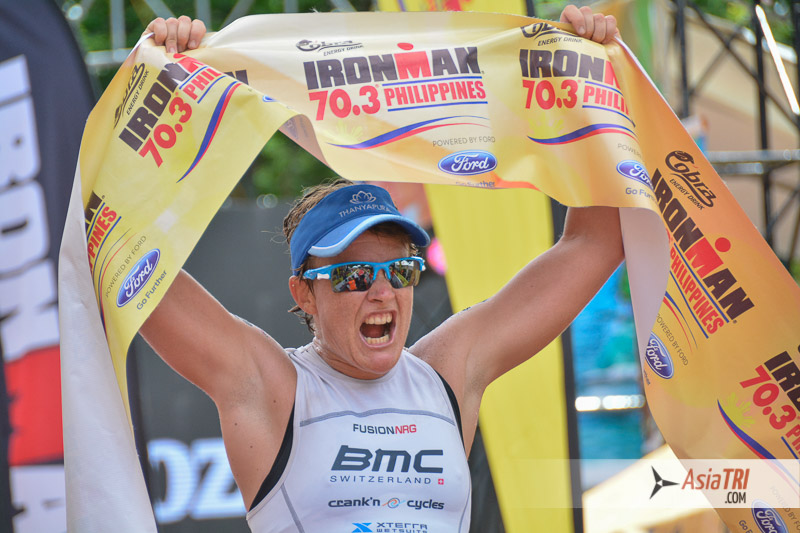 Australian Dimity-Lee Duke is based out of Phuket, Thailand and is one of the 35 female athletes to race at the Ironman World Championships in Kona, Hawaii on October 10th. Dimity-Lee is a familiar face in the Asian circuit and has been on the podium on almost every race she has done in the past season. Learn more about her and her experiences with training and racing in Asia in the exclusive interview below I came across triathlon in 2008 after retiring from State and National Basketball commitments in Australia due to sucumning to knee and ankle injuries. During that time I was also racing off road motorcyles and was looking for a way to stay fit in the summer months in Australia (motorcycle racing is mostly a winter sport). I have always enjoyed running but during my rehabilitation from injury I took up cycling and swimming. From there I got involved in the local running, cycling and triathlon clubs and raced my first Ironman (Ironman Western Australia) in December 2008.

I never took triathlon seriously until late 2012 as I was more focused on racing motorcycles at the time nationally (I was a sponsored athlete racing for the Wellard/Claas Yamaha team). When I qualified as a age-grouper for the Ironman World Championships in 2013 I started to realize my potential. At the time I was still juggling racing motorcycles, racing triathlon and working full time as an Industrial Paramedic. My job as a paramedic involved working in remote areas in the north west of WA in the mining industry, I would work for 2 weeks straight (12 hours a day or night) and then get 2 weeks off depending on my race schedule. I could only train up to 2.5 hours a day while at work and sometimes could not swim and only have access to a spin bike or a treadmill.

I turned professional at the end of 2013 after my age-group race at the Ironman World Championships. In 2014 I was getting podium results in both Ironman and 70.3 events and still working full-time. In August 2014 I came to Phuket, Thailand to train at Thanyapura prior to racing Ironman Malaysia (where I finished 3rd). I had made a connection with Jurgen Zack at the time and after parting ways with my previous coach just before Malaysia, I kept in contact with him and decided to make the move permanently to Phuket to have a go at full-time professional triathlon racing. So here I am 8 months on and haven’t looked back!

See also:  A chat with Rachel Joyce about her 2nd place in Kona 2015

Yes looking back I have had a great season after my decision to pursue triathlon as a career. I still believe I have a lot to give to the sport and am still learning and improving each training session and race. There are so many highlights in the last 8 months that I really can’t just choose 1 specific event. I have been on the podium every event I have raced in the Philippines this year organized by Sunrise Events which is pretty cool. I am also an ambassador for the Thailand Tri League Series and love how the sport is progressing here in general. It is a real honor to be part of it!

Qualifying for the Ironman World Championships has been something I have been ultimately working for this year. To have the opportunity to race the best female athletes in the world in this discipline will be awesome! I am looking forward to putting my best foot forward come race day and give it my all.

As far as challenges are concerned, I guess for me initially was questioning whether I had made the right decision to pursue the sport full time. As you may or may not know the sport of triathlon is not a big income earner so coming from a well-paid academic job this was hard. But over time, I feel I have been as happy as I have ever been personally so I feel now that I have made the right decision. At the current moment I am really focusing on getting through the end of the year as I have some important races coming up. Including Kona I will race the Xterra World Championship as well as the last 2 races of the Thailand Tri League Series (where I am current series points leader), 5150 Bohol Phillippines, Challenge Phuket and possibly another Ironman/70.3 event in Australia. 2016 will definitely include races in Thailand, Philippines, Australia and possibly Europe. I will also be working towards getting back to the World Championship events. I want to become not only a consistent performer in the Asia-Pacific region but globally so I am setting the bar high for myself!

Consistent training will not only make me improve but will continue to step me in the right direction to move up another level. I still have a lot of weaknesses and am very motivated to improve. Working closely with my coach Jurgen and his Z-Coaching athletes will give me confidence to push hard and take myself out of my comfort zones! I made the decision to move to Phuket for a few reasons but it was to have the opportunity to work along side Jurgen and his athletes. Where I live in Western Australia is quite isolated and even though I have a great place to train, I was most of the time training on my own. I knew to improve I would need to be pushed some way or another so decided to make the move. I had given myself 12 months initially but 8 months in I am really finding me feet here and happy to call it my home away from home for now! Using Thanyapura as a facility to train also was another reason I made the move. To have access to world class pools, gyms, running track also prompted my decision. I also love the hot and humid conditions so to have great weather all year round you cant really complain!

Another great advantage is that I have easy access to Australia and Asian countries as it is only a 4-6 hour flight to get to those places. I am also not as far from Europe.

I have really not found any downsides living here yet. I love the people, the food, the culture and have met some really nice friends. If there is any one downside that in the wet season, if it rains it pours! This can sometimes make it hard for cycling.

A typical training week really depends on what training phase I am in and whether I have any races coming up. I am currently in a high volume/base phase in preparation for the Ironman World Championships so this can involve training up to 30-40 hours a week. This week I will have approximately swam 16km, Ridden 600km and ran 100km just to give you an idea.

I really love my workouts so I don’t have any issues getting outside to train. I guess my favourite workouts are the ones where I am challenged but in saying that all of them can be challenging whether it is a 200km aerobic ride to a hard interval set in the pool. It is what you make of it!