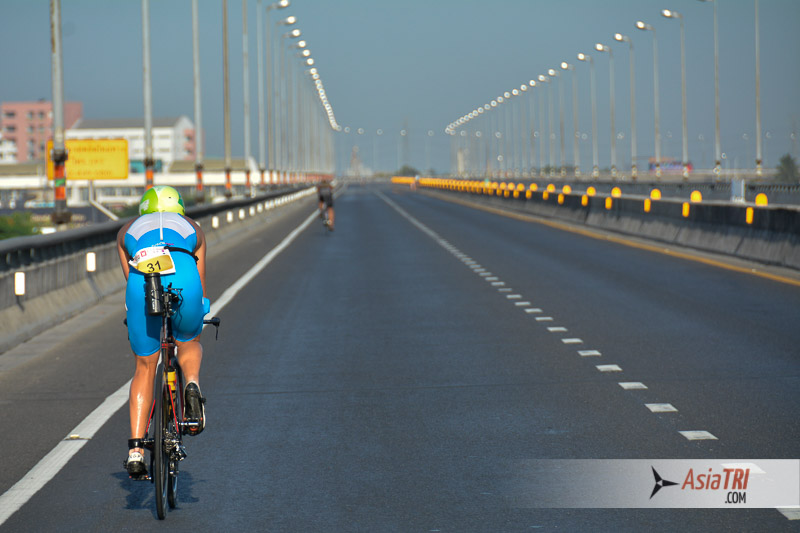 The inaugural Bangkok Triathlon happened back in 2007 and saw Chrissie Wellington, who would  breaking into the professional scene and taking home the title, the men’s race was won by Brazilian Olympian Reinaldo Colucci, that year, the event had a total of 190 participants.  This year we saw over 600 athletes taking part!

The race was organized yearly since then only missing the year of 2014, but the event was back this year in full force supported by the Thailand Tri-League, the new series of four races in Thailand, Bangkok was the second race after Cha-Am in March and the next two events are Pattaya on October  17th and the traditional Laguna Phuket Triathlon on November 22nd will also be part of the series

The article below will guide you on how to make the most out of the course for the next year events and when you find yourself in similar situations in other races.

The main changes on the race this year compared to the previous ones were in the swim. Instead of the traditional jump off the barge and swimming down the river, this year the organizers were allocated a smaller part of the river close to transition area and had to create a more conventional loop course. The second change came in the start format, rather than a mass start, this year’s event saw a rolling start with thirty athletes being allowed in the water every ten seconds. The rolling start is a new trend in triathlon races as it allows a safer swim for the athletes who can have their own spaces without too much physical contact with other athletes. The tight swim course also made this decision a great option. An important remark is regarding the water quality of the river, for every year I’ve asked for the feedback on the issue it has been positive to most athletes who have done the event.

The Chao Phraya has a very weak current thus allowing this type of set up, but in the upcoming years you never know how strong the current can be, for that reason you should train to swim ” upstream” and at a higher than your race pace effort for around 400m at a time. One workout I prescribed to my athletes to get ready to this event was the below:

*advanced athletes only / beginners should not use the ankle bands

It was impressive that the organizers managed to close one of Bangkok’s main elevated expressway for so long, this created a buzz among the local athletes as cycling on the highways isn’t allowed in normal conditions.

However this set up created a very unique situation, very strong winds! As the athletes were exposed very high up with little protection from buildings as this is an old part of Bangkok.

The rolling swim start, plenty of space to ride at and several marshals spread around the course also made this a very legit non-drafting event. The view of the course wouldn’t change much, so it’s important to learn how to stay focused on what feels like an endless road combined with an wind tunnel. To get ready for this event, you must learn how to ride hard both into the wind using lighter gears to avoid losing momentum, but also take advantage of the tail wind and pushing heavy gears.

In terms of equipment, it’s basically a flat course with the exception of the rams to get on and off the expressway and one bridge. Pick your gears accordingly, I suggest a normal crank set up (as opposite to compact cranks which comes with many bikes out of factory) of 53 teeth and a small cog of 11 teeth as that will be useful when riding the tail wind.

The goal of the organizers was to set up the run course around Bangkok’s most famous tourist attraction, the Grand Palace. This created some amazing race day photos and a very entertaining course for the athletes.

The course is all flat and relatively twisty with several out and back parts and ninety degree turns. On the back of the longer than normal bike course, you don’t need a lot of speed work to do well on this run course, istead, aim to develop a very efficient run technique and also focus on fitness. My favorite run set for this course is:

+choice cool down at the end of the session