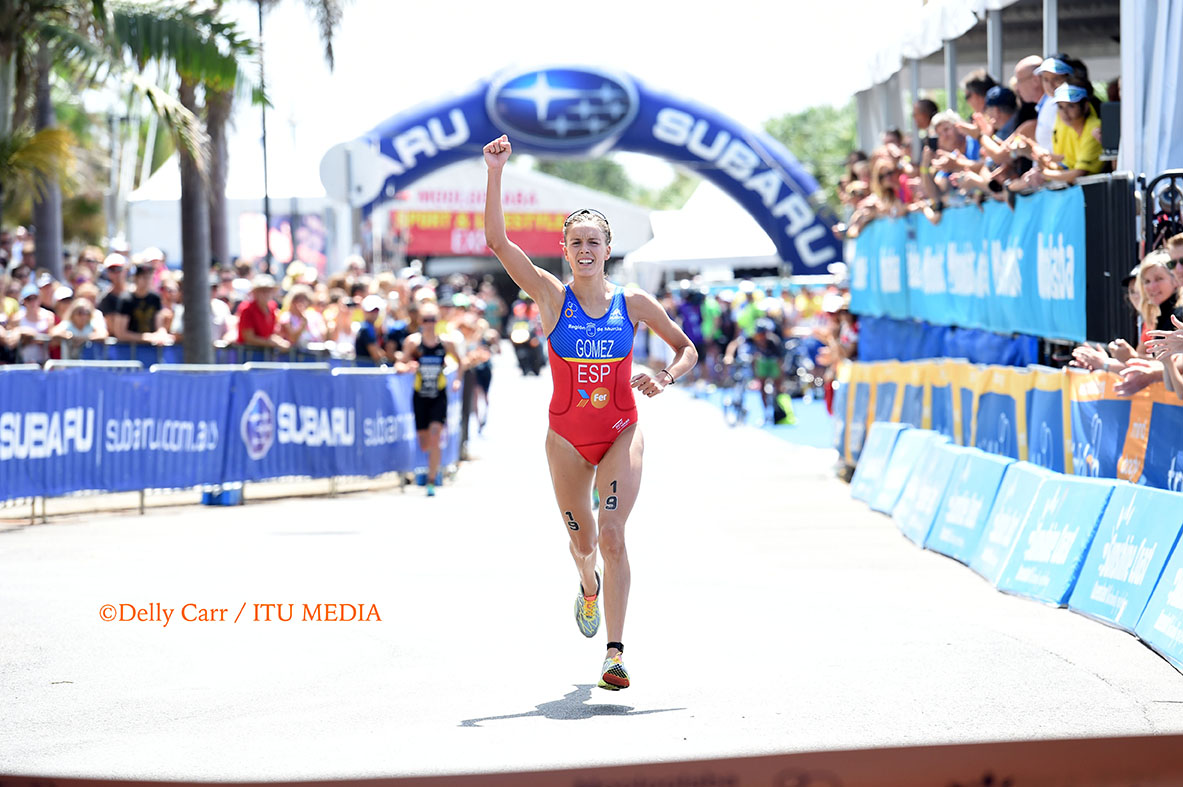 It was a pair of firsts for Spain’s Tamara Gomez Garrido and France’s David Hauss, in the season opening ITU World Cup event in Mooloolaba on Saturday. In hot, humid and windy conditions, Gomez Garridos claimed her first career ITU World Cup win, while for Hauss it marked his first Mooloolaba win after five close calls.

A week of rest was all Tamara Gomez Garrido (ESP) needed, when she claimed her first World Cup title on Saturday in Mooloolaba, just a week after competing in the season opening WTS race in Abu Dhabi.

Showing up with a steady performance throughout the race, the Spaniard earned the gold in the final lap of the 5km sprint run, breaking away from Canada’s Amelie Kretz (CAN) who crossed the line a mere four seconds behind to walk away with the silver. It was a breakthrough result for Gomez Garrido, whose past few years had been affected with injury, but has been training solidly with Javier Gomez Noya’s (ESP) team since January.

With the skies clear and the sun shining, the Sunshine Coast brought out an abundance of competitors all eager to start out the World Cup season.

Swim started out with a short and fast 750-metre leg, with the first athletes leaving the surf in around ten minutes. A small group was able to capitalise on the 200-metre run into the first transition to get a headstart on the bike leg.

Excitement heightened during the bike portion of the race. A lead group of about 16 formed early and remained together for the first half of the 20km bike leg, including Ashleigh Gentle (AUS), Renee Tomlin (USA), Lisa Perterer (AUT), Sarah-Anne Brault (CAN), Paula Findlay (CAN) and Kretz. They held 30 second lead through the halfway mark of the bike, looking to enter the second transition with a healthy advantage. But the chase group executed an excellent third lap, closing the gap to only about 12 seconds going into the bell lap, and then caught the leaders ahead of the second transition.

In a crowded transition it was hard to pick just who would come out on top, but once foot hit the pavement, Gomez Garrido and Kretz snuck out to the front where they maintained their fight until the finish. Behind them Ashleigh Gentle drew on strong crowd support and a history of strong sprint performances to claim bronze.

It was always been a case of close, but not quite there for France’s David Hauss at Mooloolaba. In a handful of appearances at the World Cup race on Australia’s Sunshine Coast, he had collected two bronze medals, two fourth places and one sixth place.
But 2015 finally turned out to be his year. While Hauss left T2 around 15 seconds down on the breakaway pair of Thomas Bishop (GBR) and Luciano Taccone (ARG), he caught them halfway through the run and was never headed. Hauss won in a time of 55 minutes and 22 seconds.

“It’s really my best race, it’s been like seven years I’m looking for this victory. Today I got the win and it’s perfect,” Hauss said.

Behind Hauss, Jacob Birtwhistle (AUS) continued his impressive start to 2015 with his first ITU World Cup medal. Birtwhistle sprinted away from Vincente Hernandez (ESP) in the final few hundred metres to claim silver.

Earlier in the day, the swell had was up for the men’s swim and a small group managed to take advantage. Led by Peter Kerr (AUS) who was first out of the water, a group of ten, including Hauss, Birtwhistle, Tommy Zaferes (USA), Benjamin Shaw (IRL), Ben Kanute (USA), Gregory Billington (USA), Tony Dodds (NZL), Michael Lori (CAN) and Pierre Le Corre (FRA) eeked out a lead on the first lap.

But with Bishop leading the chase it didn’t last long, and halfway through the bike the lead group swelled to almost 50 athletes. Bishop then continued to push the pace and with Taccone broke away just after halfway. Together they pulled together almost a 20-second lead on the rest of the field leaving T2. But it wasn’t quite enough to hold off a fast-finishing Hauss.

Behind Hauss, Birtwhistle and Hernandez went toe for toe for most of the 5km run before the 20-year-old Australian turned up the heat in front of his home crowd. Behind him Hernandez’s held on for his second ITU World Cup medal, and added to a successful day for the Spanish team.