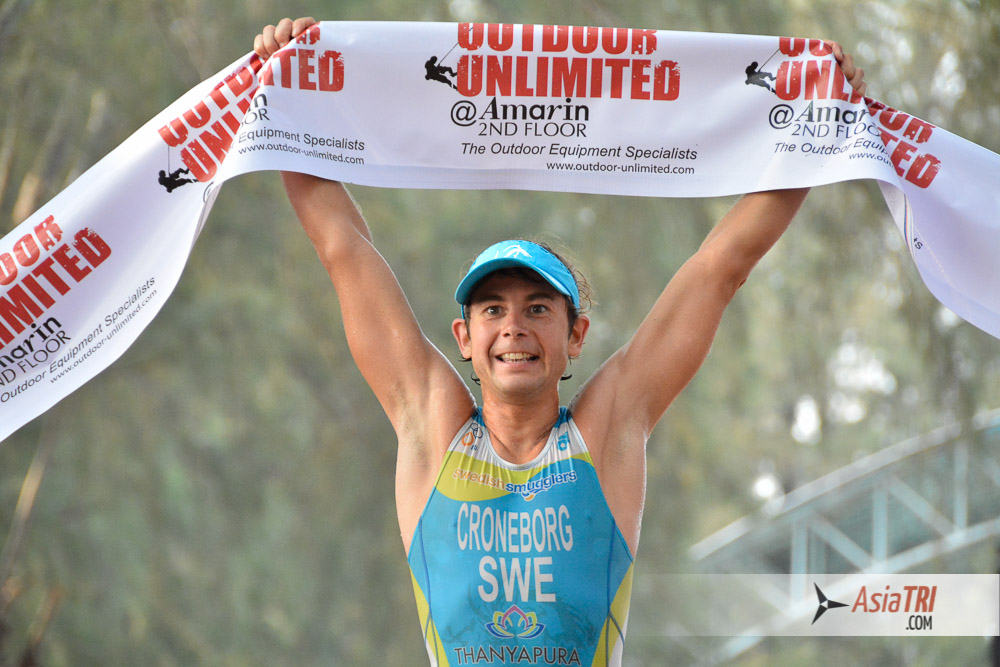 Sweden’s Fredrik Croneborg and UK’s Parys Edwards were the champions of the Cha-Am International Triathlon, in Thailand. The race was the first event of the Thailand Tri-League, the new triathlon series in Thailand that will pay a total prize purse of ninety thousand USD. The next event of the Series is the Bangkok International Triathlon on July 4th Fredrik Croneborg showed early on he came to Cha-Am to dominate the race. With a best of the day swim in 19:36, he was fifty seconds ahead of last year’s winner Ben Hammond of Australia, and one full minute ahead of another Aussie and former Tour de France rider Nick Gates.

On the bike, Fredrik kept on extending his lead with the day’s best bike split in 1:01:30, which was three minutes faster than Ben Hammon and Nick Gates, who rode together and made it for an exciting race.

While on the run, Fredrik who is one of the best runners in the sport, just cruised for the victory in 02:01:19, while the race for second place was tight, with Ben Hammond and Nick Gates running shoulder by shoulder for most part of the course. In the end, Nick managed to put on a gap on Ben and got the second place in 02:09:53 while Ben was third in 02:10:17 Former ITU athlete, Brooke Langereis from Australia dominated the women’s field in the swim and was second overall out of the water only to Fredrik Croneborg, she had a gap of over two minutes to Germany’s Katja Rabe and a three minute lead to pre-race favorites Parys Edwards and Dimity-Lee Duke.

On the bike Parys Edwards had to work hard to bridge the gap to Brooke, and once she caught her the duo stayed together until transition two. Dimity-Lee was another two minutes back.

With the feet on the ground, Parys Edwards who just won an Ironman 70.3 race last weekend in the Philippines, showed her biggest strength and quickly opened up a gap on Brooke and cruised to the win. The biggest mover on the run was Dimity-Lee who overtook Broke for the second place, Brooke held the third place.