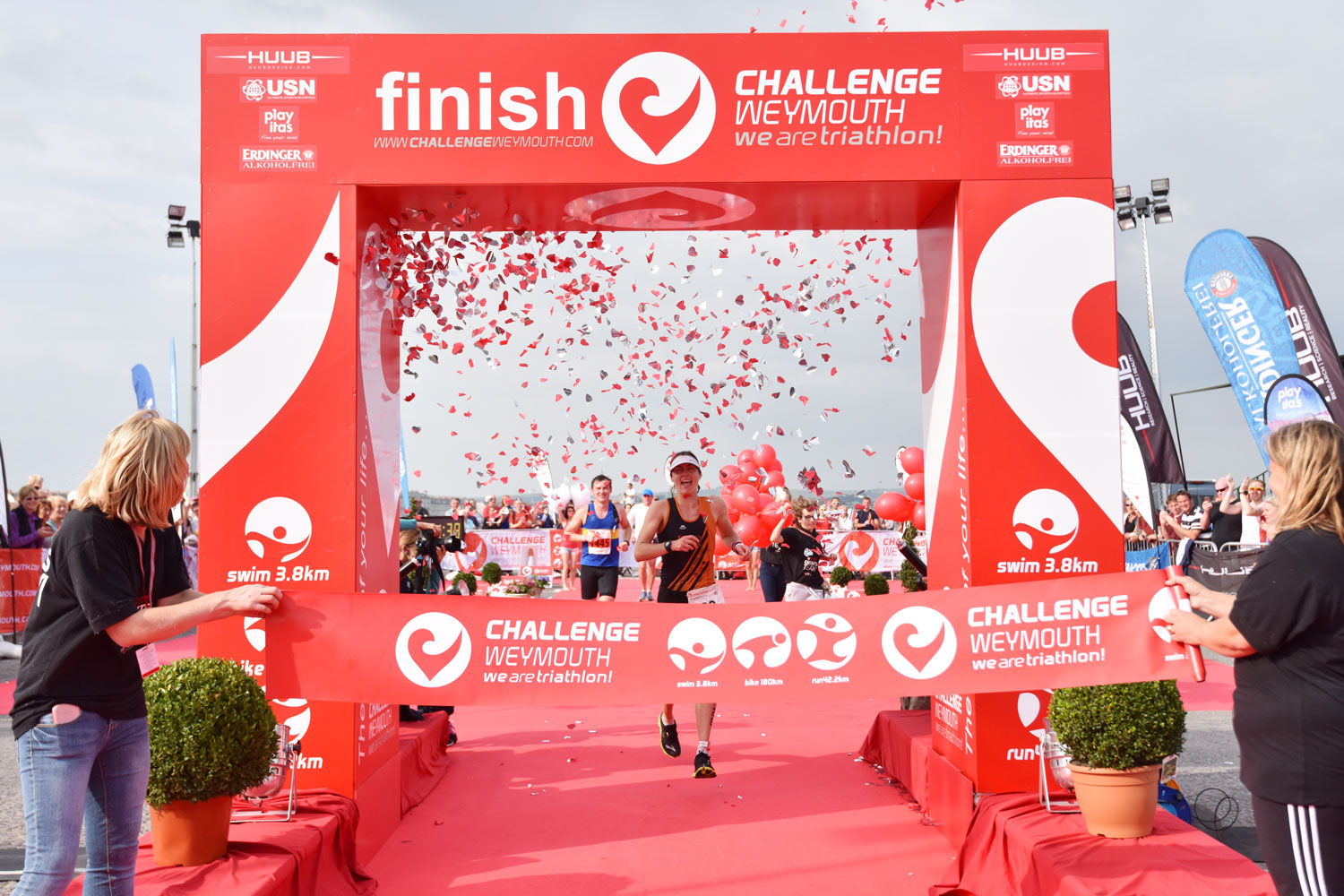 Challenge Weymouth took place this weekend, with over 1400 athletes lining up to take part in both half and full distance events. Joe Skipper (GBR) and Eleanor Hersign (GBR) took out the wins at this inaugural race located in the beautiful seaside town of Weymouth, showcasing the very best of England’s Dorset coastline.

Due to high winds, choppy sea, and strong tides with consideration for safety and enjoyment of athletes, race organisers made the tough decision to halve the full distance swim leg to 1.9km, and postpone the swim start by half an hour.

In the Challenge Weymouth men’s race Stephen Bayliss led the male pros out of the water in 27:26, followed two minutes later by fast age groupers James Grandfield and Zoltan Petsuk. By half way through the 180km bike, the three Brits, Joe Skipper, Bayliss and Joel Jameson were fighting neck and neck and continued to do so until the final 20km when Skipper managed to break away, coming into T2 with a 3:52 lead after posting a 4:43:18 bike split. Out on the run, Skipper started in strong form and managed to maintain his lead on Jameson and Bayliss who ran head to head until Jameson broke free at the halfway point.

Joe Skipper was victorious down the finishing chute with an overall time of 7:49:01. Joel Jameson finished second nearly eight minutes later in 7:57:37. Stephen Bayliss rounded off the men’s podium, holding onto third place to finish in 8:04:37.

In the women’s event, with no clear favourite going into the race it was anyone’s for the taking. “Pocket Rocket” Michi Herlbauer led out of the water, posting a 32:09 minute swim, followed by Eleanor Haresign who came out of the water just 90 seconds later. Once out on the bike course, Haresign, along with Herlbauer, Caroline Livesey and Jo Carritt rode within seconds of each other before Haresign made her move at the half way point leaving T2 with a 2:28 lead going into the run. Despite Carritt’s and Herlbauer’s best efforts to run her down, Haresign maintained her lead and took the victory in 8:54:41. Finishing second was Carritt in 8:59:49 and Herlbauer was third in 9:01:14.

Alan Rose, Challenge Weymouth Race Director, said of the event, “We are delighted with how the inaugural Challenge Weymouth has gone, and would like to thank everyone who made the event what it was – from the athletes and spectators, right through to the volunteers and local Weymouth residents. We were disappointed to have to shorten the swim course, and it was a very difficult decision for us to make, but a necessary one for the safety of our athletes. Everyone did very well in light of the challenging conditions. It has made us even more excited about hosting 2015’s ETU Long Distance European Triathlon Championship and we can’t wait to come back next year for more.”

The next Challenge Weymouth will take place on 13 September 2015 and when it will host the official ETU European Long Distance Triathlon Championships. For news and full results visit www.challengeweymouth.com