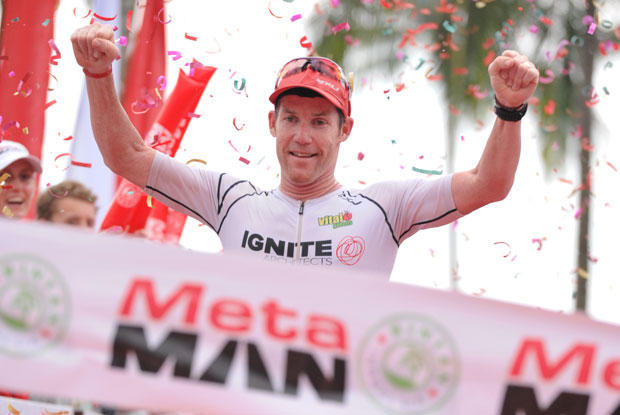 Metaman, an ironman distance event on Bintain Island, in Indonesia is Asia’s wealthiest race with 130.000USD prize money pool. Bintain is only a short ferry ride away from Singapore, a big traveling hub in South East Asia and that allows and easy journey for athletes from all over the world.

This year we saw Cameron Brown winning the event and taking home $30,000 for his effort, just one week after winning Desaru (Malaysia) long distance (2k/90/20) triathlon. Second place was last year champion australian Courtney Ogden and third place was Phuket-based Swedish Fredrik Croneborg, who was coming off a win at Challenge Atlantic City.

On the women’s side Gina Crawford took the big pay check home while Diana Riesler was second place.

Fredrik Croneborg led the Pro men out of the South China Sea where they swam two different 1.9km loops, but once on the bikes Brown, Ogden and German Stefan Schmid managed to join the Swede up front. Croneborg then flatted, as he apparently had before at this event and that allowed Ogden, Brown and Schmid to reach T2 together after 180km in surprisingly reasonable temperatures.

Brown and Ogden soon dropped the younger German on the run and about halfway into the marathon Brown pulled away from Ogden. The Kiwi crossed the line in 8:28:21 and was super thrilled with his win. Ogden was next and Croneborg ran to finish 3rd for the third time now with a race best 2:53:51.

“I’d like to thank the big man upstairs for the rain that gave us a cool day, because if that sun had come out it would have even tougher out there than it was,” said Brown.

Gina Crawford was first out of the water in the women’s race and held her own among the men. But without defending champion Caroline Steffen there to compete it was Diana Riesler who smashed the 180km bike segment with a race best 4:54:33 bike split and that allowed her to reach T2 about 5 minutes ahead of the Kiwi.

Crawford however would not be denied here and quickly caught the leader. From there she stormed to the win in 9:17:15, a time that was 11 minutes better than her time last year when she was in the runner-up spot. Riesler crossed the line in second place 2.5 minutes later and was rewarded $15,000 for her effort. Michelle Gailey finished 3rd in 9:58:25.

“So elated to win Metaman today and take home the biggest pay check of my career,” posted Crawford on her Facebook page. “Such a great race, great support on the course, really enjoy racing here. Congrats to Diana Riesler who raced so well and who I only caught at around 10k to go – sorry about that. And to Michelle Gailey who is back after a very tough year or so, so stoked to see her on the podium. And great to share the win with my idol Cameron Brown who always makes running look so easy, even in the heat!”

More in News
Short course superstar Mario Mola to race his first the half iron distance on October 17th
September 24, 2015