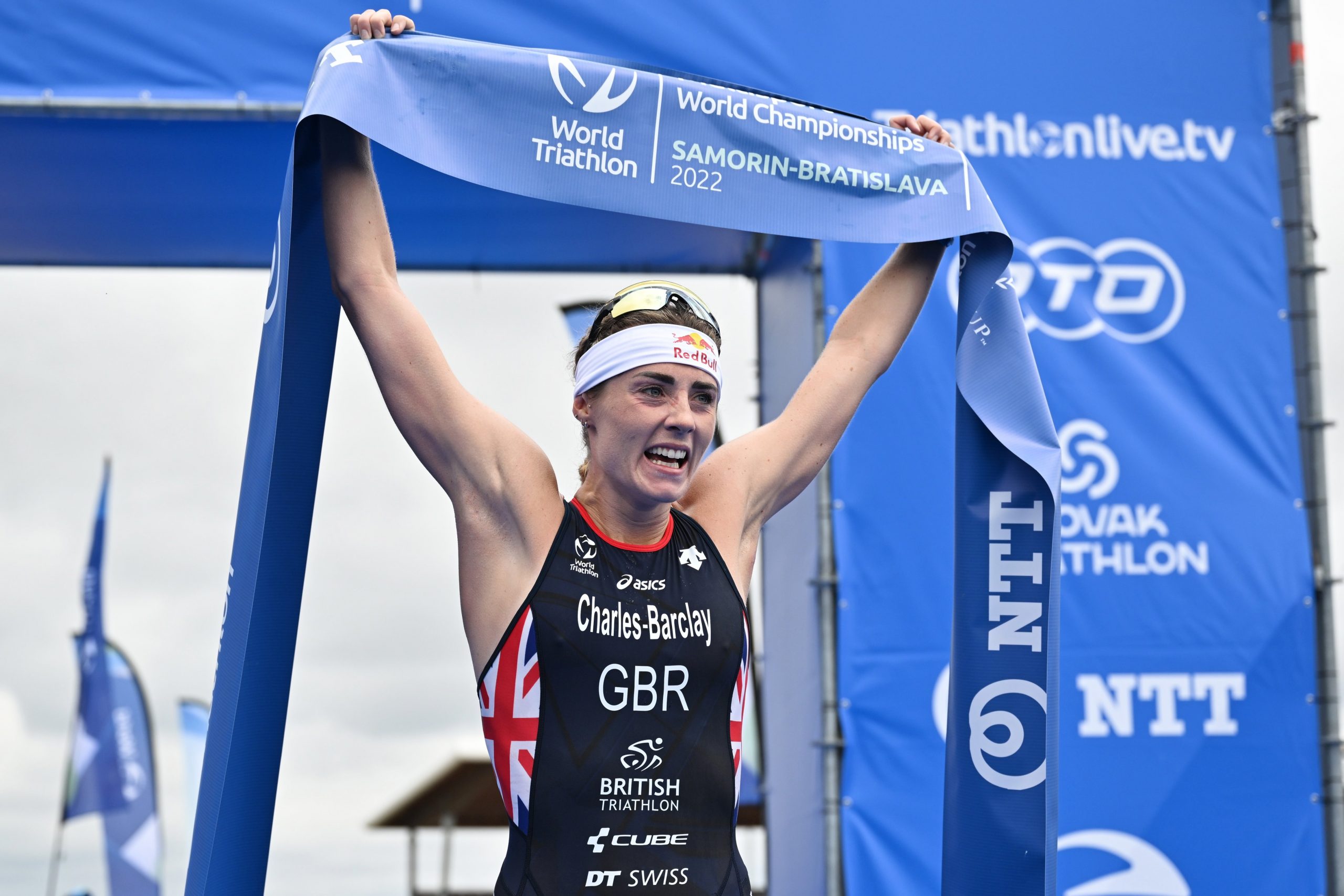 Lucy Charles-Barclay returned to racing today after injury and showcased the perfect race to take the tape and was crowned World Triathlon Long Distance champion in Slovakia. Emma Pallant-Browne showed her class on the run to chase down second position and was awarded the silver medal in the World Championships in Samorin. 2021 World Triathlon Long Distance champion Sarissa de Vries took bronze in Samorin today.

In the 2022 World Triathlon Long Course Championships, sixteen strong elite women lined up, to contest for the title and medals in Samorin. Great Britain’s long course triathlon specialist, Lucy Charles-Barclay led the women through the 2km swim and exited the water, after opening up a sizeable gap on the field.

Charles-Barclay entered solo into transition to commence the 80km bike portion of the long-distance world championships.

Great Britain’s Rebecca Clarke, Brazil’s Luisa Baptista, Sarissa de Vries of the Netherlands, Grace Thek of Australia and Marjolaine Pierre of France exited the water together and moved through into the first transition of the day, before heading out onto the 80km bike course in Samorin, Slovakia.

Up front, Charles-Barclay was leading the race but at the halfway point and around the technical turn, the British triathlete tackled with her positioning around the corner enabling Clarke to take the lead. It wasn’t long before Charles-Barclay powered back to lead the race. de Vries pushed through into second position with Pierre in third. Olympic medallist Lisa Norden appeared to be pushing through the field and moving up.

Charles-Barclay and de Vries took turns up front over the final stages of the bike course and very little separated the two women as they approached their final transition of the day.

Pierre and Pallant-Browne were over 2minutes44seconds down on the leaders as they entered transition.

Charles-Barclay moved through to lead the early stage of the run, knowing she had running sensation and fellow British compatriot Pallant-Browne on the chase.

Thek of Australia was pushing the pace in fourth and Baptista was moving through exceptionally well in fifth place.

Charles-Barclay produced a perfect set up across all three segments of the long-distance format, to take the tape and be crowned champion in Samorin, with great emotion.

“I just can’t believe it! I obviously wanted to come back and race and didn’t know exactly where I was training wise. I had been going pretty well but you never really know until you get out there and race. I knew I had to dig deep with Emma Pallant behind me. I don’t know what the future holds but I am going to keep striving and digging and see how big I can go.”

“I was really happy with the swim, it was non-wetsuit, it suited me, it was pretty choppy so I knew I could get a pretty good gap there so I went hard in the swim. Tried to go as fast as I could through T1 and get that gap and then ride pretty hard. We had a pretty strong tailwind on the way out and I wanted to save something for the way back. Even with my little hiccup on the turnaround, I was like, it’s time to dig, there’s a headwind on the way back, this is where it gets tough.”

“The sky is the limit really, I just didn’t expect that today, so I feel it’s given me so much confidence and to come back here and put it all together, it’s just really special,” said Charles-Barclay.

Pallant-Browne showed just what she is capable of across the 18-kilometre run, to storm down the finish chute and be awarded the silver medal at the long-distance world championships and a delighted de Vries, the 2021 long-distance champion, earned bronze to round out the women’s podium in Samorin.

“Super special. At the start of the week, we said goodbye to my Grandpa and this is the last place I wanted to be here this week. I am just so happy to get on the podium.”

“I didn’t have a good swim, I felt strong on the bike. I held it fairly solid and just enough to get second.”

“It’s always an honour to race with her (Lucy Charles-Barclay),” said Pallant-Browne.

“It’s amazing to be here today as the reigning champion, I did everything I could today to make it happen. The Brits were just too fast today, I had to dig really really deep today. Gave everything in the swim, on the bike and run so bronze is what we got. I am really happy.” de Vries said.

Big Race in a New Place: Advice for New Triathletes