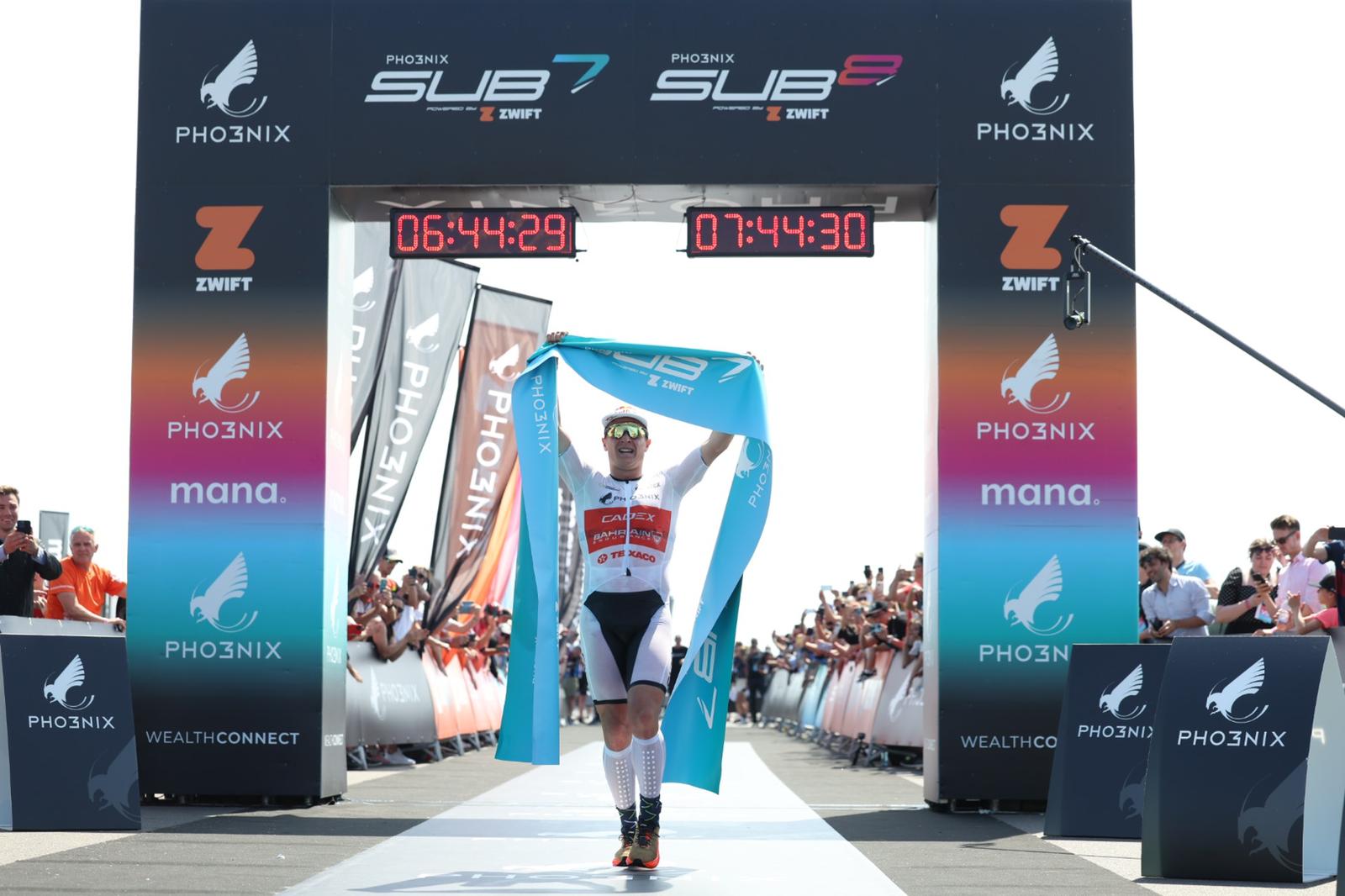 Blummenfelt finished the 3.8-kilometre swim, 180-kilometre bike, and 42-kilometre run in an astounding 6:44:25 using cutting-edge applied science and technology and backed by a team of 10 pacers across the three disciplines.

His head-to-head competitor Joe Skipper also finished under seven hours, in 6:47:36. After taking on the challenge with only a weeks’ notice, it is an incredible achievement.

Blummenfelt had opted to use only one swim pacer, but that was World Championship qualifier Lars Bottelier. Alistair Brownlee picked up swim pacer duties for Skipper, with FORM Goggles sending out Max Stapley to tail Skipper to track his swim pace live through their proprietary goggles.

The race kicked off from a deep water start, and almost from the gun Team Kristian gapped Team Joe with a much faster pace. Bottelier’s powerful strokes cleaved through clear water, with Blummenfelt sitting right on his feet. A few meters back and wide, Skipper sat on Brownlee’s hip, then slid back content to tap his feet as Brownlee sighted for shore.

Despite the high pace, Blummenfelt exited the 3.8-kilometre swim a little more than three minutes adrift of his target 45-minute swim time. Skipper, who had targeted a more modest 49 minutes, finished in 53:24.

It was a tougher swim than expected, with Bottelier later reporting a current had been running against them.

After Brownlee helped undo his wetsuit, Skipper ran into bike transition with Blummenfelt nearly five minutes up the road, but the Brit still took time to put bike aero shoes on, as opposed to triathlon shoes already clipped onto the bike. He then hopped onto the back of the Ribble Weldtite train to chase down Blummenfelt on their CADEX prototype bicycles.

Blummenfelt opted to use a smaller team of pacers on the open road linking the swim exit with the Lausitzring, merging with the rest of them once they entered the race track. Conversely, Skipper used his entire bike pacer team through the entire bike leg.

Skipper riding average paces above 55 kph began taking 20 seconds every lap out of Blummenfelt’s lead, with the pass finally being made at kilometre 153. Skipper let out his signature “Junkyard Dog” bark as he steamed through.

Blummenfelt also seemed to be having some issues with his bike pacers, narrowly missing a crash when his front wheel clipped the rear of Matt Bottrill as a rider up front nearly crashed. He was also seen falling off the paceline a few times while taking on nutrition.

Skipper pulled on his shoes, opting to go without socks on the marathon. Frank Schauer would pace him throughout and hand him his nutrition and hydration from the aid stations. Support crew on a bicycle followed close by, spraying Skipper with water every so often to keep temperatures down as the unshaded track reflected the midday heat up onto the athletes.

Blummenfelt seemed unruffled by being the last athlete out onto the run; though he was eight minutes adrift, he even took the time to put socks on before heading out with Barnaba Kipkoech. Bike support driven by his run reserve Lani Rutto served his nutrition needs, but Blummenfelt once again narrowly escaped disaster when Rutto crashed after Blummenfelt handed back a bottle.

With the Norwegian running around 3:33 min/km to the Brit’s 3:41 pace, he began chipping away at Skipper’s lead with every lap until finally the pass was made at the 18th kilometre. Blummenfelt barked out a soft “woof, woof” as he went by, which his competitor acknowledged.

By this point the two athletes were so well ahead of their targets that it became a question not of whether they would go Sub7, but of by how much. Blummenfelt was first across the line with a metronomic 2:30:50 marathon. Skipper brought the day’s racing to an end with his 2:36:43 marathon.

Blummenfelt had given a conservative target of 7 hours and blew it out of the water by nearly 15 minutes. He said, “It was full gas from the gun and I almost went down there early on the bike. That got my heart rate up. And it was a tough day… It was brutal just to stay on the wheel to these guys. And also a massive thanks to Joe and his team for the tough battle. Luckily we managed to sneak just in front. Thank you all. Another thanks for the Pho3nix [Foundation] for organizing this. It’s been an amazing two years of building the team together and preparing for this event. It’s been an epic challenge.”

Incredibly, Skipper was just 36 seconds slower than his stated target time, which before the gun went off had seemed overly ambitious. “All week we were practicing race pace efforts, getting a feel for it,” he stated. “They couldn’t have done anymore; we did the best we could. And then in the race on the bike we took it to Christian as best we could. Iit was a shame I lost a bit more time in the swim than what I’d hope. But we did a really good bike, quicker than what we were hoping for. And then on the run, I was just hoping he was going to blow [up] to be honest, like after he caught me, but he didn’t.”