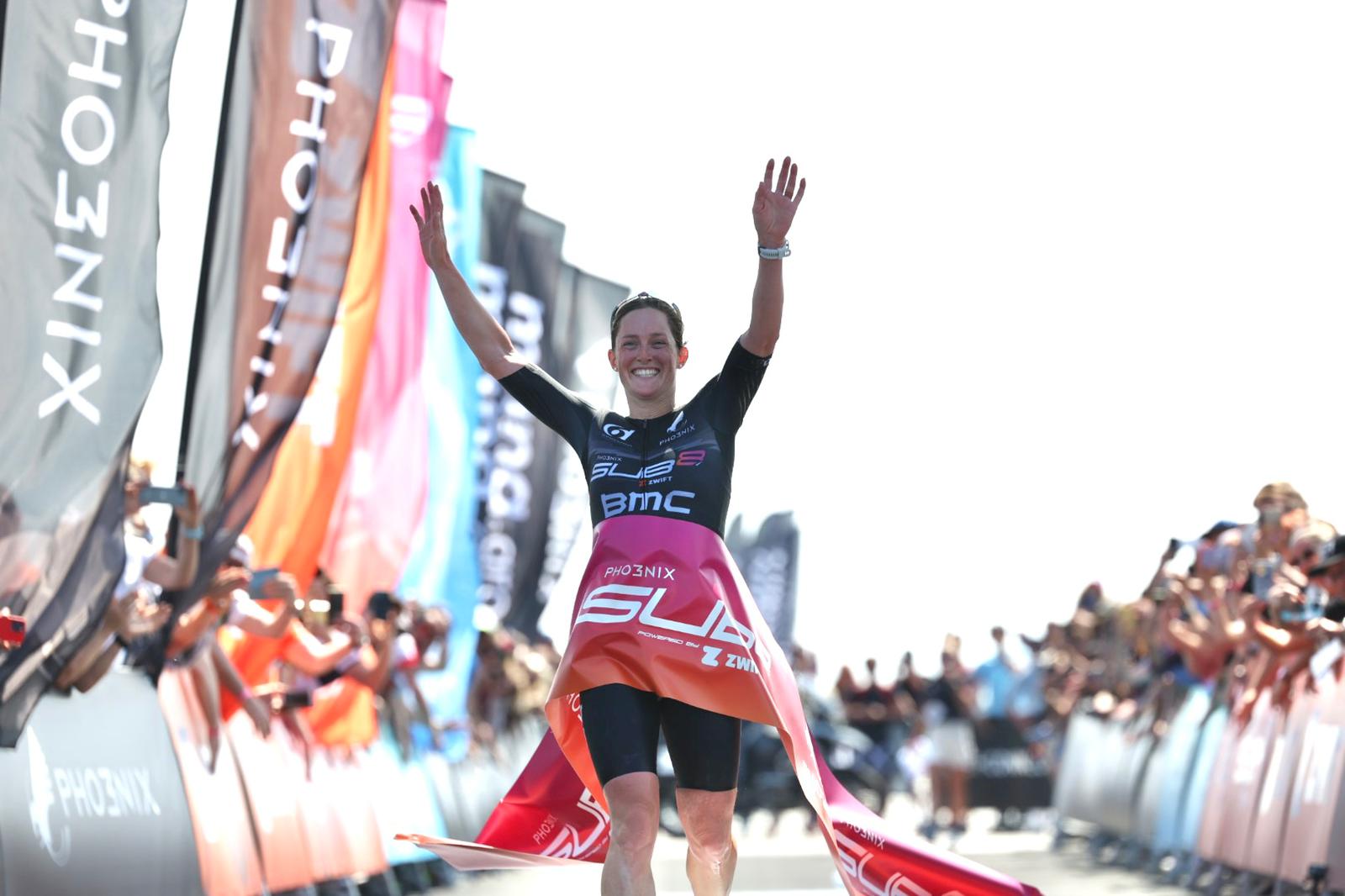 -While not valid world records due to event format, Mattews and Nicola Spirig are the only women to race the iron-distance category under 8 hours.

Matthews stopped the clock in 7:31:54, racing the 3.8-kilometre swim, 180-kilometre bike, and 42-kilometre run at full tilt with a team of 10 pacemakers, top-of-the-line equipment, and plenty of heart.

Her head-to-head competition came in the form of Olympic gold and silver medalist Nicola Spirig, who herself made a valiant effort to finish also under eight hours in 7:34:19.

Spirig and Matthews set off at 7am from a deep water start. Immediately the difference in tactical choices were apparent. Team Nicola opted for a triangle formation with Angela Maurer on the front, Lucy Buckingham to one side, and Spirig bringing up the rear on Maurer’s feet. Team Kat opted for a simpler straight paceline with Sarah-Jane Walker up front and India Lee in second spot keeping Matthews in touch.

While Team Kat started off hot, Team Nicola took on the lead position midway through the 3.8-kilometre swim. However, their triangle formation soon began breaking up, with Maurer pulling ahead stretching Buckingham and Spirig out single file. Team Kat was metronomic and methodical with a steady pace, exiting the swim seven seconds ahead. However, average paces were slow due to a prevailing current against the swim direction; both swims were just under 55 minutes, five minutes behind target.

Matthews sped off with her bike pacemakers down the link road heading to the Dekra Lausitzring, but Spirig’s team seemed the more organised with smoother lines through turns. Once onto the race track, Team Kat maintained a high pace, with three riders up front maintaining pace and Matthews stuck in on the back behind one or two more riders tasked with keeping her in touch with the leaders. After a few laps, the lead riders peeled off into the pits and Matthews’ domestiques pulled her forward onto another group of three riders up the road.

Conversely, Spirig chose to keep all her riders with her throughout the 180-kilometre bike ride. With the rotation up front happening among her pacemakers, Spirig rode on second or third wheel from the rear of the train.

Matthews concluded the bike leg with an average speed of 46.9 kph in a time of 3:50:06. Spirig came in three minutes later having averaged 46.3 kph.

Matthews set off with ultrarunner Nerys Jones on the first few laps of the marathon on the inner loop road of the Lausitzring. With temperatures rising on the unshaded oval, she set off with an initial 3:57 min/km pace.

Spirig followed soon after paced first by Maja Neuschwander, but going at a much faster clip. It still took a few laps to reel Matthews in. The pass came at the 18th kilometre – but not for long.

Three kilometres later, Matthews passed Spirig. Later timing analysis indicated it had been Matthews’ fastest lap, while Spirig was deep in the hurt locker logging her slowest at that point.

Matthews ended up running an evenly-paced marathon at 2:46:09 ranging between 3:55 to 4:03 minutes per kilometre.

Incredibly, this was not the day’s fastest; Spirig had actually run over a minute faster at 2:45:07. It was the three minutes lost on the bike that cost her the honor of crossing the finish first.

Matthews said post-race about the pass by Spirig and her counter-pass, “I definitely thought it was a pass for good. She’d been taking that gap up over every kilometer we’d done. As soon as she’d gone past, my husband said, ‘You can.’ And I was like ‘I can.’ So I just had that moment of realization that actually, I shouldn’t just give up and let her go.”

The vice world champion has definitely got momentum building after her second place finish at the Ironman World Championship last month. She added, “I feel like I’m not ready for a break. I’ll probably regret that in two weeks’ time, but I came off a bit of a low period before St. George. Now with this, I want a consistent training block and then obviously Collins Cup, and Kona.”

Spirig is set to retire from triathlon at the end of the year, and what a sendoff this has been! She said, “ I will finish this year. I will do some more racing; I haven’t planned yet what races, which will be just for fun. And then  I am looking forward to putting more time and more effort into my foundation work… And I’m talking to some sponsors to work with them afterwards. So a lot of exciting things, but most of all, I’m looking forward to time with my kids, doing sports with my own kids.”

Training - The Benefits of the Treadmill