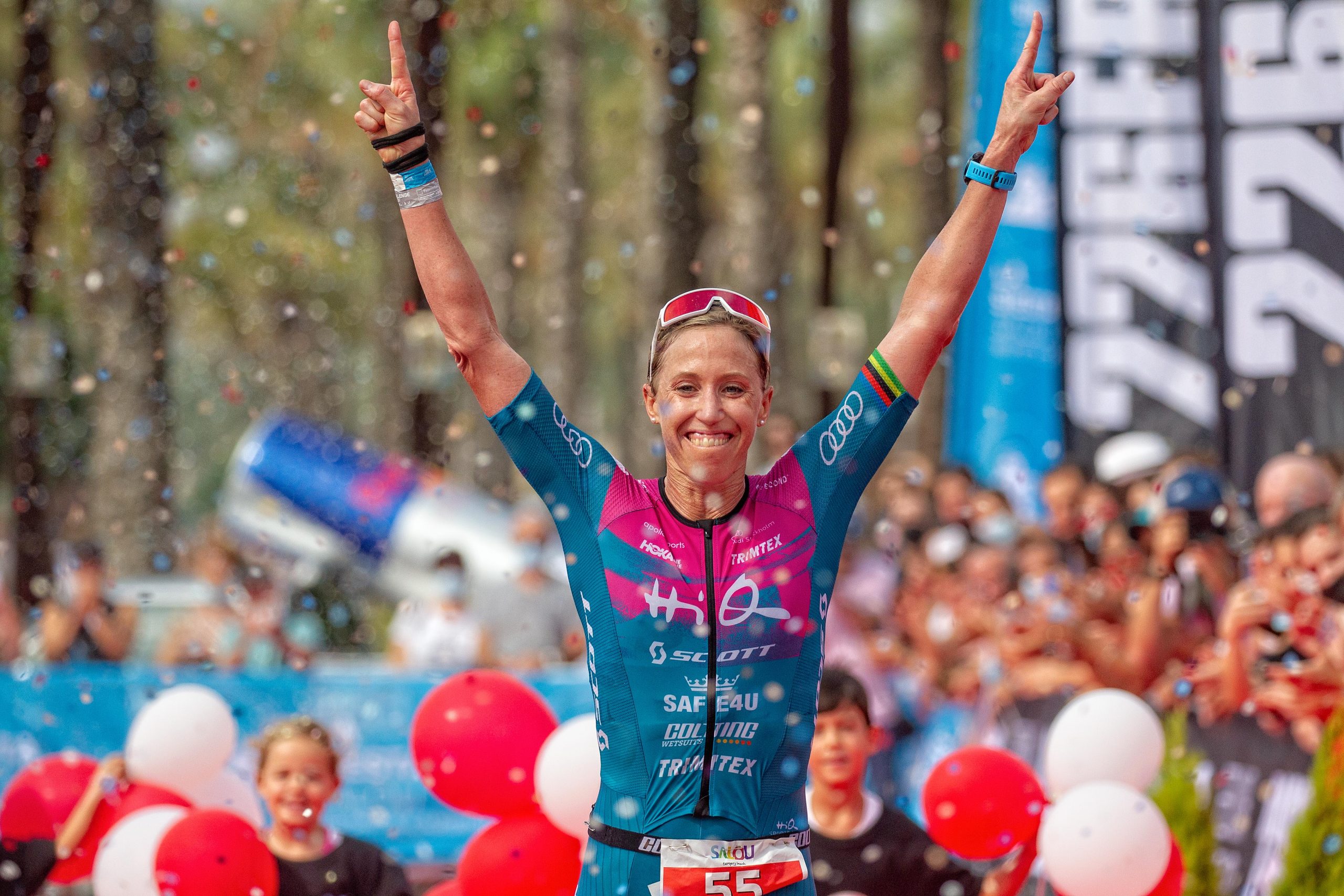 CHALLENGESALOU 2021 didn’t start as planned with high winds causing the cancellation of the Sailfish Swim for safety reasons but it didn’t make the middle distance race along the shores of the Mediterranean any less exciting with Colin Chartier (USA) and Lisa Norden (SWE) taking the wins.

With the race a duathlon and the start delayed by 30 minutes, the male pros set off on the first one-lap 5km run with the top 20 all entering back into T1 within one minute of each other.

With the wind ever-increasing with strong blustery conditions, Kyle Smith (NZL) quickly took the lead followed by Colin Chartier (USA) and Frederic Funk (DEU) 30 seconds down looking like he was biding his time to take the lead, which he did by the beginning of the second of three laps. He seemed to thrive in the challenging conditions and came off the bike with a 2:48 minute lead. But, in the surprise of the day, Chartier set a cracking pace on the run and by the end of the first of four laps overtook Funk at such high speed it took even the commentator’s breath away! And he never let up, taking the win in 3:28:41. Van Egdom (NED) had a solid race taking second place in his first middle distance race and Robbie Deckard (USA) rounded out the podium in third having run his way up from ninth off the bike.

It was a very emotional day for Chartier as he revealed he raced for his sick grandfather. “My grandpa’s dying right now back in the States and so this one is dedicated to him. I love any opportunity I get to race but I thought about my grandpa all the time. No matter what, I was never going to give up and I fought for him, just as he’s fighting for his life. No-one was going to catch me, not today!”

In the women’s race, Sara Perez Sala (ESP) led into T1 in front of her home crowd but it was Els Visser (NED) who took the lead on the bike. However, Norden had other plans, taking the lead by the end of lap one. Once she took that lead, she never looked back, consistently increasing her lead to just under six minutes off the bike and then further extending it on the run, taking victory in 3:50:59 with a perfectly executed race. Behind her, it was a strong battle between Visser, Perez Sala and Lucy Hall (GBR). Perez Sala slipped off the pace after the first lap but Visser and Hall battled it out through the run, both very conscious that Emma Bilham (SUI) was putting the pressure on to take a spot on the podium. However, she ran out of real estate and Visser took second in 3:58:50 and Hall maintained the final spot in third in 3:59:28, just 44 seconds ahead of Bilham.

Norden said her first duathlon since 2008 was full of surprises! “I was surprised, I felt really, really good on the first run and I quickly found some great bike legs. I didn’t want to start running with the other girls, I wanted a bit of a gap but I was surprised by just how big that gap was. The wind was strong but with a disc wheel you can actually use it to your advantage. With triathlon you have to be flexible and adaptable. Today there was no swim, even though there was meant to be but it was still a great day! The crowd was just amazing and they really lifted me, they cheered me the whole way on the run. The last time I did a duathlon was 2008 and they are hard!!”

Lost in Transition: The Do’s and Don’ts