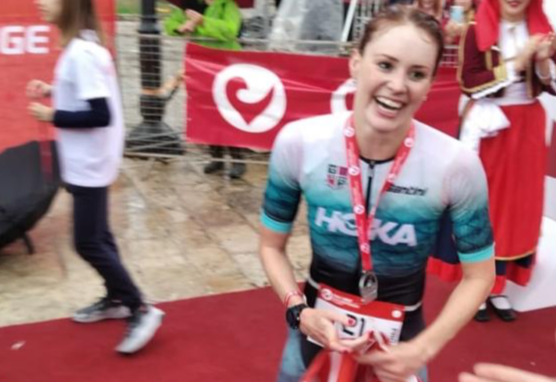 Lucy Hall unstoppable
In the women’s race, it was Lucy Hall who, as expected, recorded the fastest swim time and immediately grabbed a sizeable lead over the rest of the field. After 24:18 minutes she had finished her 1.9-kilometer swim and when she was already on her bike, the next ladies only came out of the water. Emma Bilham followed with a gap of almost three minutes, directly followed by Margie Santimaria. One of the other favorites, Els Visser, came in fourth towards T1 and was then almost five minutes behind.
On the bike, Hall initially had a tougher time, as she saw all the ladies get closer in the first thirty kilometers. The British top athlete was still in the lead, but Bilham was close to a gap of 1:26 minute, while Visser in particular had started to advance to the front. After 30 kilometers, the Dutchwoman was facing a 3:20 minute gap, considerably less than after the swim.
Yet that situation changed in the thirty kilometers that followed. Not entirely by the way, because while Visser started losing time again and came through at two-thirds of the bike leg with a gap of 4:05 minutes – still third in position – it was Bilham who was still getting closer to Hall. With her gap reduced to 1:17 minute, she had some perfect momentum at this point in the race. This situation remained almost unchanged in the closing stages of the bike leg; Hall began her half marathon with a 1:20 minute lead over Bilham and 4:57 minute lead over Visser.
During the half marathon, Hall did exactly what she needed to do: make sure her lead was maintained and not jeopardized again. In terms of time differences, little changed and Hall claimed victory after 4:17:09. Bilham got second only 2:14 minutes behind and Visser third with a gap of 4:32 minutes.

This dsq is due to an unintentional course cutting action, after following the lead bike, which became apparent in the final stages of todays’ race.

All involved regret this decision but the application of the objective rules as set out by our World Triathlon governing body is an important factor in our sport.

In an act of solidarity, pro’s finishing behind Magnus decided to share their earnings of todays’ price money as a token of appreciation of the form Magnus showed today.