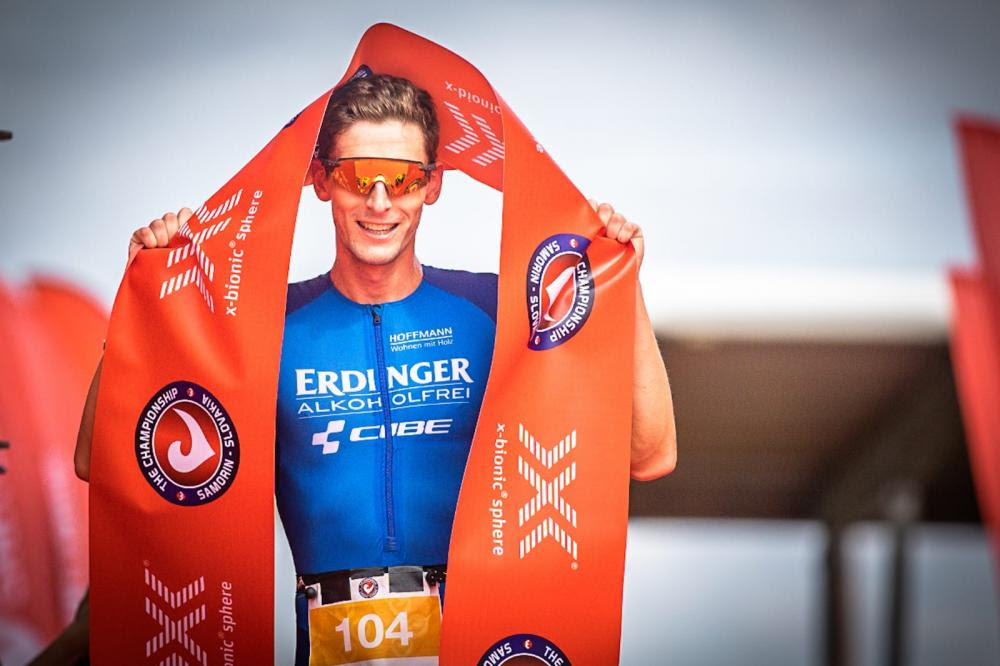 In a weekend that will forever go down in triathlon history and a day that will be remembered for blisteringly fast bike speeds, Florian Angert (DEU) and Lucy Hall (GBR) took the wins at the fourth edition of CHALLENGEFAMILY THECHAMPIONSHIP.

Following the ground-breaking The Collins Cup on the Saturday, today the attention turned to THECHAMPIONSHIP when yet more of the world’s top professional athletes, together with age group athletes who all qualified for the right to race THECHAMPIONSHIP, congregated at the x-bionic® sphere in Samorin, Slovakia.

The swim was characterised by strong winds and a choppy Danube River with the chop giving some indication as to the winds awaiting them on the bike. Unsurprisingly, local hero and renowned swimmer, Richard Varga (SLK) quickly took the lead and exited the water in 24:43, followed by Angert (+0:48) and Frederik Funk (DEU) over a minute down. Varga pushed the pace right from the start on the bike but it wasn’t long before Angert took the lead. Funk soon joined Angert at the front of the field and it became a battle of the two German powerhouses, clocking speeds in excess of 60kph with the strong tailwinds. Behind them, the young Dane, Magnus Ditlev had ridden up the field and tried to bridge the gap but was unable to catch them, coming into T2 behind them in third. Funk clocked the fastest bike of the day in 1:54:39, an average speed of over 52.5kph.

Angert and Funk ran neck and neck for the first couple of km but with Angert dictating the pace. He soon broke away and continued to extend the gap to the rest of the field, taking the win in 3:36:03. Meanwhile, behind him Ditlev was gaining on Funk, overtaking him at 16km, taking second place with Funk finishing in third.

Angert said taking the win felt amazing. “On the bike I felt like I was flying, but only on the part with the tailwinds! On the run it was tough running on the sand and the grass but I felt really good today. Frederik closed the gap on the headwind part of the bike which was pretty impressive and maybe that cost him the win in the end but it was only on the run that I knew I could win. I felt really, really good on the first lap and that’s where I tried to make the difference and that worked out. It feels like a big relief that I win here – it’s amazing.”

In the women’s race, Hall led from start to finish, exiting the water in 26:51 but with Sara Perez Sala (ESP) hot on her heels under two seconds behind.  They rode together for the majority of the bike, while respecting the 20m drafting rule until the 60km mark when Lucy found something extra and broke away, entering T2 with a three-minute lead. She had to dig deep on the run but managed to maintain her lead, taking the win in 4:10:45, just 1:30 ahead of Perez Sala. Haley Chura (USA) consistently gained on the two leaders throughout the run but ran out of real estate, finishing in third.

Lucy Hall said it was a tough day and one she wasn’t expecting. “I definitely raced that in a really hard way and I don’t know why I do it to myself, I blew up on the run at 12k – it’s such a long way to hold my form from there but I just tried to hold it together to get across the finish line. It was a tough course and the headwind on the bike was insane but I really surprised myself today and the crowd on the run kept me motivated!”

An Introduction to Power Meter