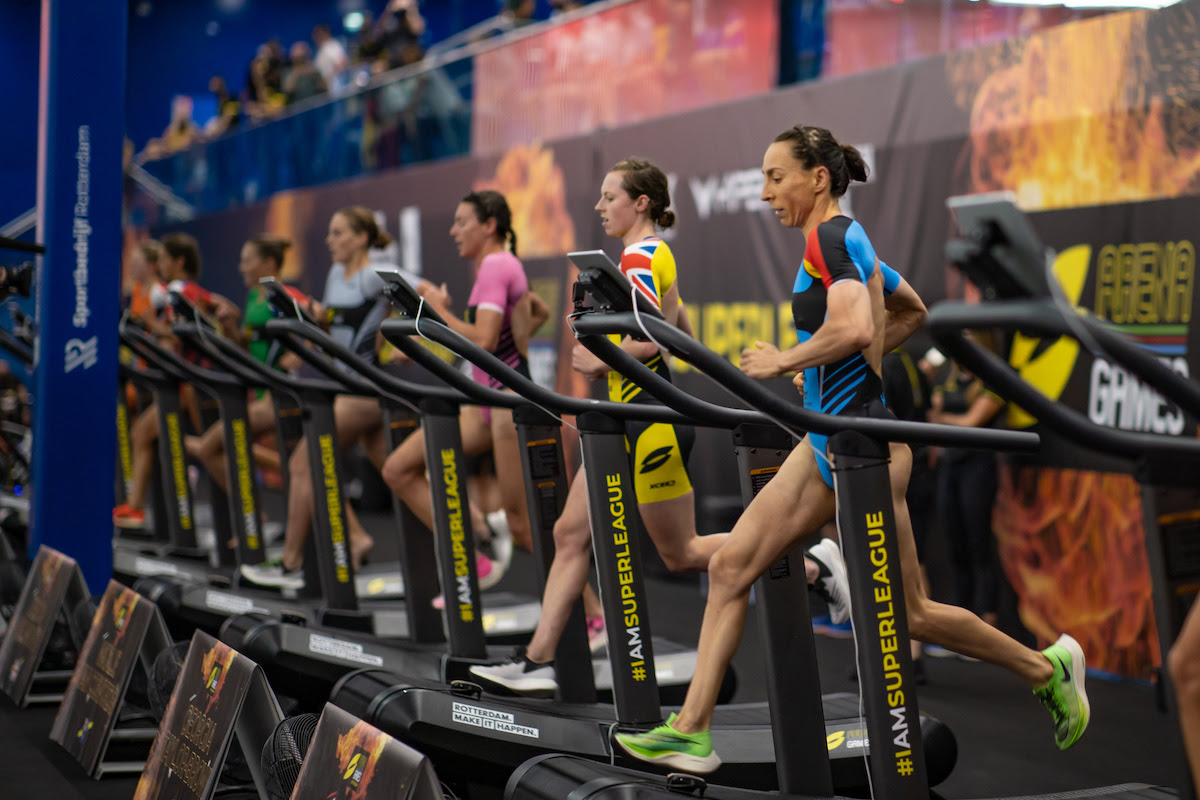 Jessica Learmonth and Justus Nieschlag were crowned the inaugural SLT Arena Games champions as professional triathlon returned to the world stage in style.

British star Learmonth dominated the racing in Rotterdam to seal a commanding victory, while in the men’s field Germany’s Nieschlag produced a consistent display to take a tense win.

The SLT Arena Games is a new format developed by Super League Triathlon and Zwift that blends in real life and virtual racing over short and exciting formats.

In Rotterdam the athletes took on the Triple Mix – three short bursts of racing with the order of the disciplines shuffled each time. The distances for each stage were a swim leg of 200m in an Olympic-sized pool, a bike of 4km aboard a Tacx Neo2T smart trainer and the run being 1km on self-powered curved treadmills, all projected onto the Zwift virtual platform.

In the women’s race, Learmonth triumphed against a stellar international field of athletes – including the reigning Ironman World Champion Anne Haug of Germany and Learmonth’s British compatriot Georgia Taylor-Brown.

Learmonth led from the get-go and ended the race with the maximum 30 points out of 30. Her nearest challenges were Dutch favourite Rachel Klamer on 23 points and Belgium’s Valerie Barthelemy on 22. Taylor-Brown finished with 19 and Haug ended with 9.

Learmonthsaid:“The Triple Mix format was so hard. It felt absolutely horrendous as I felt smashed after the first stage. I had a massive advantage with my swim as it doesn’t take that much out of me and I can recover in the pool. I’ve never done anything this hard before as it’s the thinking of different things, such as picking up your goggles and remembering I had to swim after the treadmill run [in Stage 3]. You always need to be thinking of other things.

“It’s great being back racing. I was apprehensive as I haven’t raced since the 2019 Tokyo test event and I didn’t know what to expect. It’s amazing that Super League have put this on for us and we really appreciate it because I know it was difficult.”

Nieschlag said: “I never thought I could come and win here as I haven’t raced for more than one year. It feels amazing as I hadn’t even thought about winning this race. It was all about tactics today and not going too hard at the beginning. I swam well today and my transitions were good and that was key for succeeding here.”

Gomez said:“I didn’t think I’d make third place overall after a pretty tough start to the day. If you make a small mistake in this type of racing, then you’ll pay for it. I didn’t expect to be on the podium
overall, so I’m really pleased. It’s not the favourite distance of an older guy like me but it
was really fun as well. I raced a French Grand Prix event yesterday and the trip to get here was horrendous, with everything going wrong. I slept for four hours and I felt it most in the first triathlon, but I’m proud to have been competitive against some of the best guys at these shorter distances.”

Haug said:“I didn’t have any expectations on my performance as I knew the other girls were
faster than me. I wasn’t as strong as I could have been be to be competitive here, but I’m
very happy about bringing myself to the test and having a motivational challenge. I’m very
proud that I survived somehow and kudos to all the other girls. I’m also really thankful to
Super League for giving us this platform to race… it’s a perfect format.”

See also:  7 Tips to Improve your Bike without a Power Meter