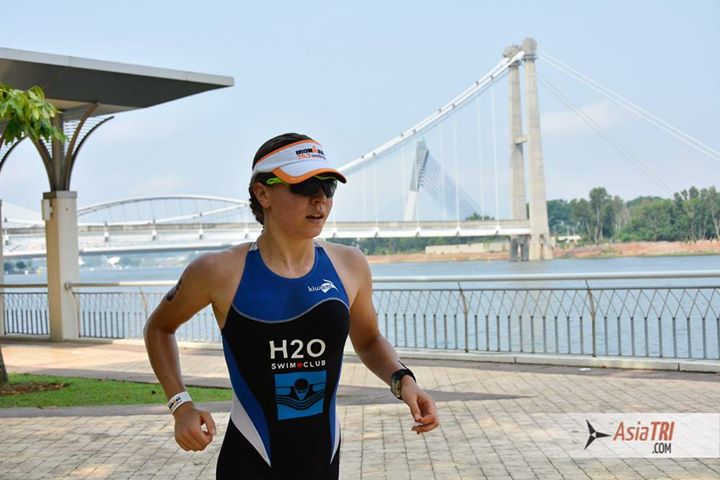 Leanne Fanoy was the top age grouper at Ironman 70.3 Putrajaya on April 5th 2015 with the time of 04:51:26, she managed to finish 6th overall and beat some seasoned professionals. Leanne is a Dutch national but is based in Abu Dhabi where she lives with her family and is a senior high school student. Get to learn more about her in the exclusive interview for AsiaTRI, her plans for the future and her day in Putrajaya As a young girl I was active in different sports. It started with gymnastics, handball, and horse riding. After I moved to Abu Dhabi I played in my school’s basketball, soccer, and volleyball teams. At 15 years old, I did a season of track and field and caught our athletics director’s attention. He himself was a triathlete and had competed in many Ironmans, and introduced me into the sport.

I had no idea what triathlon was, but soon enough I was out on my road bike for my first ride with him. I was supposed to be picked up by my parents half way, but ended up doing a full 90km ride. I think he already knew then I was going to be doing longer distances in the future, even though I had no swimming, cycling, or running background (besides friendly track meets). Since swimming requires a lot of technique which I didn’t have, I joined forces with Roger de Manresa, who has been taking care of my swim training ever since and is a crucial part of my development as a triathlete.

About two and a half years ago I competed in my first local sprint triathlons. I quickly had many podium finishes for my age group, and started competing with the women. In my second season of racing I won the Tri Yas and Abu Dhabi International Sprint distances.  At the end of that season I decided to sign up for Challenge Bahrain in support of my favorite charity, the World Bicycle Relief, for which I am now a proud ambassador. I signed up for this race as a way of giving meaning to my triathlon training and racing through a fundraiser. Since this distance was completely new to me, I didn’t quite know how to prepare for it. After two years of doing most of my training myself, I decided that I was going to need a coach from now on to help me sort out my training more seriously.

After having trained at Tri-Topia in France during the summer holidays, Lee Thomas took on this role to guide me towards future races, with Challenge Bahrain as the first one. So just over a month after my 18th birthday, I lined up for my first half ironman distance last December. While the goal was to fundraise and complete the race, I actually really surprised myself with a strong performance over this distance, coming in as the first overall female age-grouper in 4h31.

I moved to Abu Dhabi with my family for my dad’s work over nine years ago. It was a difficult transition at first but I have grown to love it here. This is my third year in the sport here, and it has grown considerably over this time period. The triathlon scene seems to be buzzing, with more teams, training venues, and events every year.

This year Dubai held its first Challenge race and Abu Dhabi hosted its first ITU event, marking the opening race of the World Triathlon Series. Besides these international races, we also have a filled race calendar of triathlons, duathlons, road races, cycling races, and more. It’s great to see this many events lined up and to see so many athletes participating. Not only is it great for the serious athlete, but it’s also promoting active living across the country.

They recently built a beautiful cycling track in the middle of the desert, with loops up to 30km long. For me this is really important because cycling is quite dangerous on the roads here. Swimming is also not a problem as there are many pools and swim clubs to join, in addition to the beautiful Arabian Gulf for open water training. There are also plenty of places to run which is great.

Training during winter is good because the weather is very accommodating. During the summer months it gets very hot and humid so I usually flee to the Netherlands during the school holidays. The training opportunities are thus quite good in the UAE, and location wise it’s in a pretty good place in regards to traveling for races. The triathlon scene in the Middle East is certainly growing with the Challenge Triple Crown, and races in Asia and Europe are also reasonably accessible.

Initially the plan had always been to go back to the Netherlands after graduating form high school. However, the plans have changed after receiving my acceptance to the New York University of Abu Dhabi. I’m very excited about attending this university next year and spending a few more years in Abu Dhabi. This place has given me numerous opportunities and I look forward to continue to train here. I was very happy with my result in Putrajaya. I had come to the race to qualify for the World Championships. When I knew during the race that I was in a good position to do that, I wanted to get to the front of the age group women.

My swim didn’t go as well as I had hoped so I had some catching up to do on the bike. Abu Dhabi is very flat so the hills slowed me down. The course was beautiful though, I tried to enjoy it to the extent that you can enjoy yourself during a race. I wasn’t really aware of what position I was in until I started passing some of the pro women during the run. It was a bit surreal and it didn’t quite sink in.

The run was very tough due to the heat and high humidity. I started off at a decent pace but quickly felt it wasn’t sustainable in these conditions. I struggled but kept running from aid station to aid station, embracing the cold water dumped on me by volunteers and trying to stay hydrated. Crossing the finish line, Pete announced that I was the first female age grouper of the day, which still came as a huge surprise. A sixth place overall made it even better.

Challenge Bahrain probably marks my best result until now. There I made my debut in the half distance with a time of 4:31. The biggest surprise here was probably my run split. I had never run a half marathon before – let alone after a 1.9k swim and 90km bike –  but ran a 1:27 – a time which I was very happy with.

Like the race in Putrajaya, I didn’t know I had won for the overall age-group females until it was announced as I crossed the finish line. After that my ambition at the half distance grew. I then lined up at Challenge Dubai in February, where I unfortunately crashed after 10km on the bike due to the strong winds. One week later I won the Abu Dhabi ITU Age Group Olympic Distance despite injuries from the crash.

My next goal is to perform well at the 70.3 Ironman World Championship in Austria. I am very happy to have qualified in Putrajaya and am really looking forward to this race. A typical training week for me is planned around my school day which is from 8am – 3:30 pm. I usually do a morning bike or run session before school. Most of my bike training happens on the turbo to avoid the roads. I usually run outside early in the morning before the heat. I usually swim between 4-5 evenings per week with the H2O Swim Club, depending on my workload at school. The swim is my biggest challenge and needs the most work so it’s important I spend a lot of time in the water.

Luckily I have a great coach who has been very patient with me and we have made major progress over the past two years. The weekends typically include a long bike ride at the cycle track in the desert. It’s challenging to be training this much as a high school senior but usually we make it work.

> Thank you Leanne and good luck for your World Championships preparation!

Ironman recovery guidelines: Learn how to get back into training