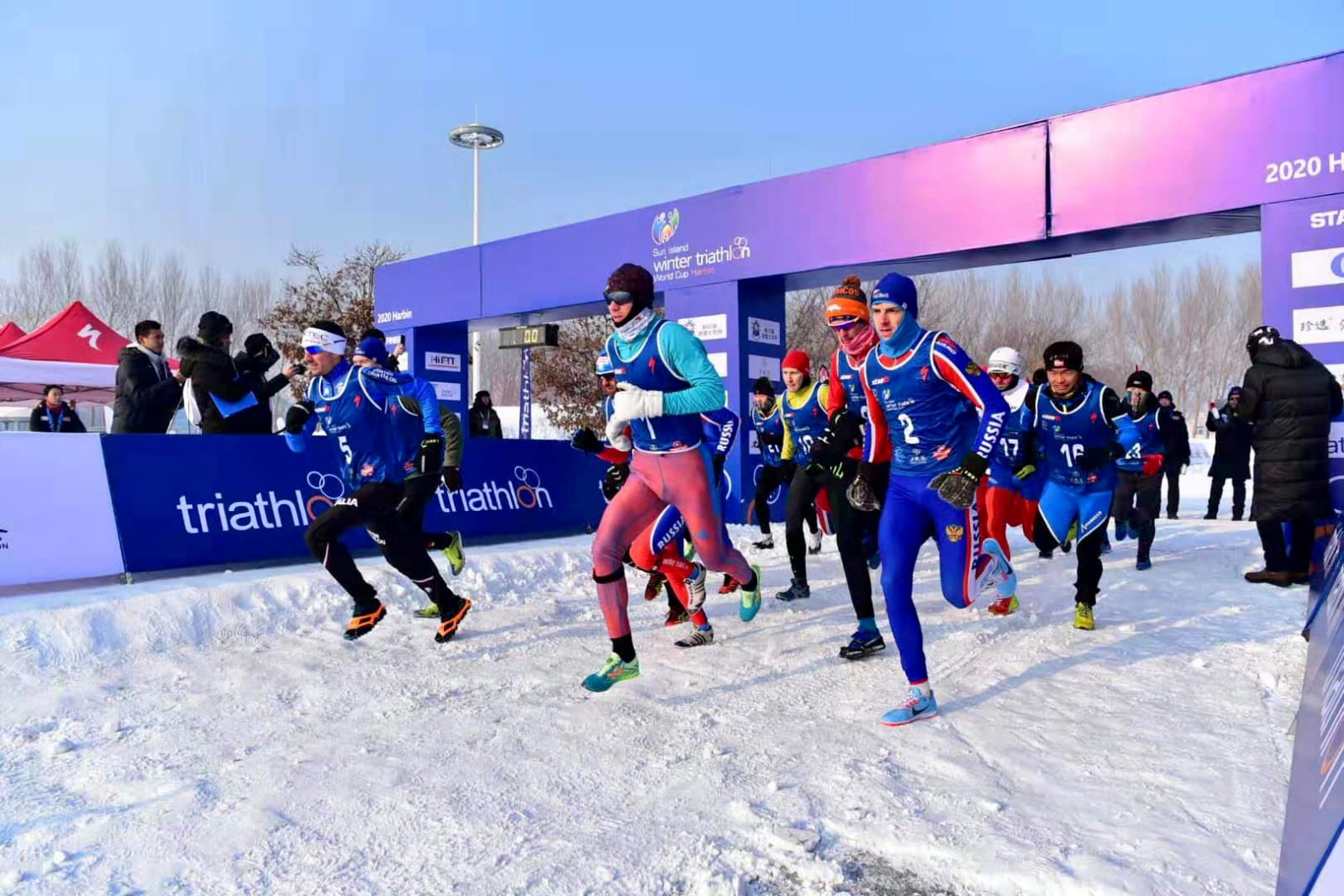 A standout dominance for Russian triathletes has given them a full podium sweep, both in the male and female races, in the debut of the ITU Winter Triathlon World Cups, hosted this weekend in the Chinese winter resort of Harbin. With freezing temperatures, and with all three segments running over the frozen river, victory was for the best winter triathlete of the moment and six-times World Champion Pavel Andreev (RUS), while his teammate Daria Rogozina, still a U23 athlete, was the first female crossing the finish line.

The ITU Harbin Winter Triathlon World Cup, organised by the Chinese Triathlon Federation, offered magnificent conditions to all participants, with a circuit consisting on a 6.88 km run (2 laps), followed by a 12.5 km bike course in just one lap and three laps in the cross country ski course to cover 10.32 km, and with the air temperature on 16C below zero.

23 men toed the start line for kicking off the winter triathlon season and it was Dmitriy Bregeda (RUS) who set up the pace from the start of the run, stablishing almost a minute difference with the group of chasers, that included some well-known names in the winter triathlon world, like Andreev, Daniel Antonioli (ITA), Pavel Yakimov (RUS) and Pello Osoro (ESP). But it was during the tough bike circuit when another Russian, Evgenii Evgrafov, gave a master class on how to ride a bike over the snow.

He managed to finish the segment two minutes ahead of the chasing group, the other three Russians, with only Giuseppe Lamastra (ITA) and Osoro keeping up with the pace. But it was in the last transition when the Russians showed that they are ahead of everyone else when it comes to putting the skis on, even in transition, which they did almost 15 seconds faster than the rest of the field. Andreev, who had managed to keep the leaders under control and waited until he had the skis on, just pushed incredibly hard until the end, crossing the finish line in the first place to claim his first victory of the season.

See also:  5150 Subic Bay course review and why short course races are a great option for athletes of all levels

Behind him, Evgrafov and Yakimov completed the first podium sweep for Russia this season, with their teammates Bregeda and Denis Kabanen (RUS) following them in 4th and 5th place. Antonioli, Lamastra and Osoro, in that order, closed the top eight places.

In the women’s race, it was also a Russian display of power in the snow, with the current World Champion, Daria Rogozina, and her two teammates Yulia Surikova and Svetlana Sokolova (RUS) imposing from the first meters of the run a frantic pace, that none of their rivals was able to follow. The three of them continued to push hard together in the bike course, with Surikova trying hard to leave the other two Russians behind, knowing that her ski is not the best in the field.

But the race was again going to be decided in the last segment of the race, and it was Rogozina who proved to have the best skiing skills, to claim the Harbin World Cup title, followed in the finish line by Surikova and Sokolova. Behind the three Russians, the 4th pace was for Austria’s Romana Slavinec, almost 10 minutes behind the leader, while Italian Sandra Mairhofer claimed the 5th place.

The next stop of the ITU Winter Triathlon season will be the World Championships, to be held in the Italian resort of Asiago in February.