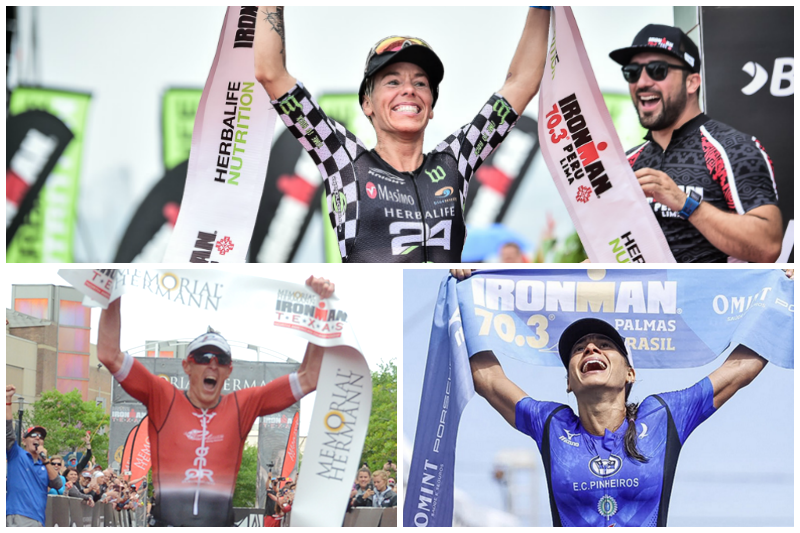 Andrew Starykowicz (USA) put his stamp on the race early as he was in the first group coming out of the water and he quickly pounded his way to the front of the bike in the opening miles. Starykowicz recorded one of the fastest IRONMAN bike legs ever (4:01:15) and dismounted his bike with a huge 13:04 advantage on his closest rival. This outcome was an incredible feat considering Starykowicz had to overcome a horrific accident when he was hit by a truck in August of last year.

Once on the run, Starykowicz started to slowly hand back time to much of the field. His pace dropped substantially from 10 to 14 when Matt Hanson claimed the lead clipping along at six minute per mile pace. Hanson, the 2015 IRONMAN Texas champion didn’t quite meet all his expectations for 2016, but his performance this year would vault the 31-year-old into the record books. With his blistering 2:40:07 run, Hanson claimed the IRONMAN North American title in a winning time of 7:52:44 which bettered his previous course record in Texas and also earned him the title as the fastest IRONMAN time recorded by an American.

It was looking like nothing could go wrong for Lauren Brandon (USA) as the fish recorded the fastest swim for the pro women and men fields on the day. Spending the entire 112 miles off in front of the race Brandon wasn’t aware that Jodie Robertson (USA) was tearing through the field, while recording a race-best bike split, attempting to close in on the 14 minute lead Brandon have over her coming out of the water. Notwithstanding, Brandon still had a 5:40 advantage over Robertson at the conclusion of the bike.

Once on the run, the wheels fell off Brandon’s race as she gamely hung onto the lead until 10 miles when she succumbed to the relentless pursuit of Robertson from behind. Robertson’s lead was never under any real threat in the second half of the run and she went on to capture her first IRONMAN title of her career clocking in a sub nine-hour finish.

Potts and Jackson Perfect in Peru

Andy Potts (USA) proved once again he is a brilliant race tactician at the 70.3 distance. Exiting the water first with three others, Potts took the initiative to pushed the pace early on the bike and broke the field up in the opening half of the bike. Now the front of the race had been reduced to three and Potts fell back to let the pair of Felipe Barraza (CHL) and Felipe Van De Wyngard (CHL) that accompanied him to share the work load up front. Potts put in a solid run and held off a late charge Jesse Thomas (USA) for the win at the inaugural event.

In the women’s race, Heather Jackson (USA) jumped to the lead early into the bike and never looked back. Second out of the water, second fastest bike and third fastest run was the perfect recipe to cook up the win in Lima in a near perfect performance for the American.

Brazil’s Igor Amorelli proved once again he is the Brazils’ premier distance athlete once again in Palmas. Using his patented strong swim and bike combination, Amorelli carried a seven-minute advantage heading into T2 and cruised the run for the win unchallenged.

Kelsey Withrow (USA) established a one minute lead on Bea Neres (BRA) out of the water of the Rio Tocantins. The pair would eventually be hooked up on the bike and would dismount their bikes together leaving the race to be determined on the run. It would be Neres that would prevail taking the victory by a winning margin of 5:31 over Withrow.