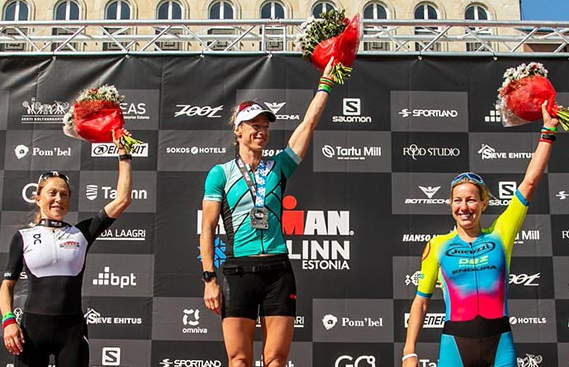 First out of the water in the pro women only race was Kimberley Morrison (GBR) and the Brit kept the lead on the bike until the late stages of the 180 km bike.  Corinne Abraham (GBR) bridged the gap to the long time leader and went off the front and lead the pair to the dismount line leaving the race to be determined on the run.

Early in the run,  Abraham surged and Morrison could not respond to the move expanding her leading gap with each passing km. Abraham would take the victory clocking a 8:55:22 winning time while Kristin Liepold (DEU) would run her way into second with Morrison securing the final step on the podium.

Chris Leiferman (USA) took control of the race in the second half of the bike and carried two minute advantage on Kennett Peterson (USA) heading into T2. With first half of the run completed, Leiferman  had a leading gap of +3:42 on Tyler Butterfield (BER) who started the run sixth and facing a +6:10 deficit. With the leader faltering in the final three miles of the run, Butterfield made a gallant attempt to capture Leiferman, but came up nine seconds short. Leiferman would take the well earned win recording a 3:44:32 winning time.

Skye Moench (USA) rode her way into the lead within the first 10 miles of the bike and never looked back. The 2019 IRONMAN European champion out-biked her closest rival by eight minutes and back that up with the second fastest run on the day to take the victory by a +6:08 winning margin.