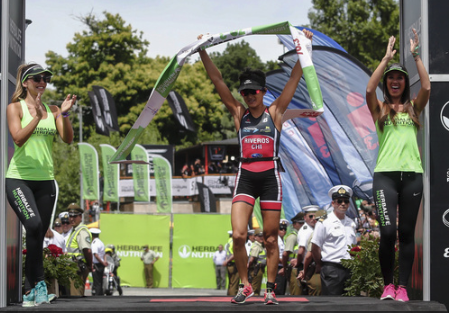 With the first race of the 2019 season, Barbara Riveros (CHL) has won her fifth consecutive Ironman 70.3 Pucon in her home country, winning in 4:30:07.  Brazil’s Santiago Ascenso claimed the victory in the men’s elite category with a winning time of 3:59:33.

Felipe Barraza of Chile was first out of the water in 25:48, a strong 50 second lead over fellow countryman Martin Ulloa.   Felipe Van de Wyngard and Andy Potts (USA) followed 2 seconds later.   Ascenco was 59 seconds back of the leader.

Barraza rode alone for the first 22kms, with a chase group composed of  Taylor Reid (CAN), Van de Wyngard, Potts, Ulloa and Ascenco behind by 45 seconds.   By 45kms, the main chase group has reached Barranza.   Ascenco nows leads the front pack by just seconds.  The new chase group is well over 6 minutes back of the lead group.

Van de Wyngard made a late surge on the bike and reached T2 with a 20 second lead over Ascenco and Potts.   Barraza and Reid were a minute back.

With 6.4kms completed on the run, Ascenco has taken a solid 1 minute lead over Potts, Van de Wyngard and Barraza.    Reid and Ulloa have faded off pace, falling over 2 and 4 minute deficits respectively.

Ascenco maintained his lead and never faded, winning the men’s elite category in 3:59:33, a 1 minute 35 second victory over Andy Potts.   Felipe Barraza  finished 2:35 back, claiming last spot on the podium.

Macarena Ezquerra (CHL) was the first woman out of the water in a tight lead pack, posting a swim time of 28:10.   Riveros followed her fellow Chiliean in 28:13, with Catalina Ezquerra a second back.   Alicia Kaye of the United States came out in 28:18, followed by Elizabeth Bravo (ECU) two seconds later.

In the 22kms time split, the trio of Kaye, Riveros and Macarena Ezquerra has surged with lead, with the remaining field fading behind the lead group.   At the 45km mark, that lead trio has opened up a lead of 2:30 and 4:02 over Bravo and Romina Palacio of Argentina.

The trio of Riveros, Macarena Ezquerra and Kaye came into T2 as a group, and had gained more than a 4-minute lead on the remainder of the women’s field.

Riveros bolted out of the gate in T2, posting a strong 1:43 lead over the American Kaye in the first split at 6.4kms.   Ezquerra was further back, 2 minutes and 46 seconds behind the leader.

ITU: Winter Triathlon season gets ready to kick off