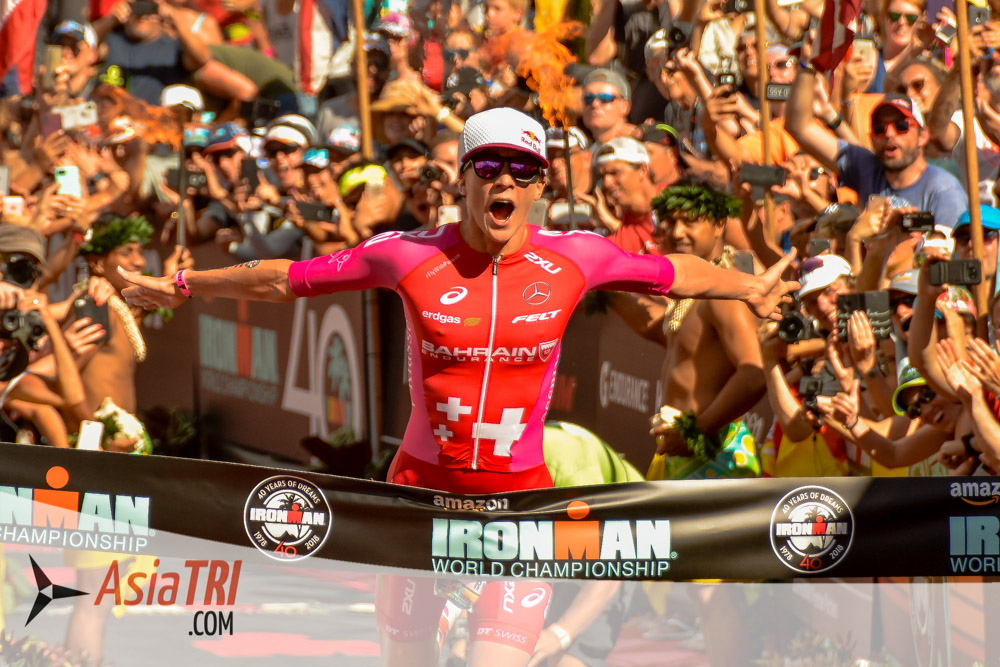 On a picture-perfect day with light winds and temperatures in the mid-80s, defending champions Patrick Lange (DEU) and Daniela Ryf (CHE) shattered their own course bests in what will go down as the fastest race in history taking claim to the crown at the 2018 IRONMAN World Championship brought to you by Amazon. Lange repeated his 2017 IRONMAN World Championship success finishing with a winning time of 7:52:39, while Ryf claimed her fourth IRONMAN World Championship title with a time of 8:26:18. After crossing the finish line, Lange added to the day’s highlights by proposing to his girlfriend Julia Hofmann, capping off one of the most monumental finishes in the history of the sport.

Men’s Race Recap
Josh Amberger (AUS) led a pack of nine athletes out of the water in 47:39, with a group that included Tim O’Donnell (USA) and Javier Gomez (ESP) in tow. The first of the uberbikers to make his way out of Kailua Bay was Andrew Starykowicz, (USA) just under two minutes behind Amberger. Bike course record-holder Cameron Wurf and 2014 IRONMAN World Champion Sebastian Kienle (DEU) exited the water another minute back, and Kienle found himself with a flat tire in the opening mile and needed a rear wheel swap before he could get his signature lead underway. Reigning runner-up Lionel Sanders had the most work to do out of the water, finding himself 6:21 down coming out of T2.

Starykowicz and Wurf wasted no time taking control of the ride, bringing along Frenchman Anthony Costes up to the turn at Kawaihae. The pair of leaders swapped the front position a handful of times on the climb up to the turnaround at Hawi, before Costes dropped off and Amberger moved into third. Wurf put in a big surge to take the lead as the trio started their descent, with the winds as still as they’ve ever been at the top of the course.

As the leaders made their way down to Kawaihae and then back onto the Queen Ka’ahumanu Highway, it was clear that Starykowicz didn’t have the legs to attack the course record, but Wurf never wavered from riding a record pace for the second straight year. He flew into town with a four-minute lead after an incredible 4:09:06 bike split, shaving three minutes, 48 seconds off his course best ride from a year ago. Starykowicz was next into transition, but a large group of elite runners including Lange, Bart Aernouts (BEL), Braden Currie (NZL) and O’Donnell rolled into T2 just a few minutes later, ready to take control of the race from the super-cyclists.

Wurf ran strong for the opening 10K, as Lange, Currie and Aernouts ran in lockstep along Ali’i Drive giving chase. Lange finally broke away and overtook Wurf 10 miles in, with Aernouts also making his way past Wurf a few miles later. Currie and O’Donnell ran side-by-side as the five leaders climbed Palani Road and headed toward the Energy Lab. Aernouts kept the gap to Lange hovering around two minutes throughout the trip out to the Lab, but he couldn’t make up any ground on the defending champion. The win was never in doubt for Lange as he turned the screws on the way back to town, running just off the pace of his record-setting marathon from 2016.

“After 8K I found my running legs and the mental part of it started to feel really good,” said Lange in the post-race press conference. “Madame Pele was with us today and gave us the best conditions. She probably knew it was the 40th anniversary of the best race in the world.”

The big mover over the final 10K was last year’s third-place finisher, David McNamee (GBR), who surged past O’Donnell and Currie to move into third. Lange broke the tape for his second record-setting win, this time becoming the first athlete in history to finish in under eight hours. His time of 7:52:39 carved nearly nine minutes off his record from a year ago. Aernouts was next across the line four minutes later, finishing on the Kona podium for the first time. McNamme closed with the third-fastest marathon of the day to earn third-place for the second year in a row. After trading blows throughout the entire marathon, O’Donnell and Currie finished fourth and fifth, respectively.

Women’s Race Recap
To no surprise, Lucy Charles (GBR) smashed the swim course record, exiting the water in 48:14 with a gap of nearly three minutes on fellow super-swimmer Lauren Brandon (USA). IRONMAN Asia-Pacific champion Teresa Adam (NZL) was next onto the pier another minute behind, leading out a group that included Helle Frederiksen (DNK), Sarah True (USA) and Liz Blatchford (AUS).

Ryf found herself more than nine minutes back after battling through Kailua Bay and a jellyfish sting in 57:26. The three-time defending champ made her way through the field, moving from 15th to second by the 30-mile mark. Sarah Crowley (AUS) was the only athlete able to keep pace with the defending champ, but the pair of chasers couldn’t chip away much at Charles’ lead as they powered up the hill to Hawi.

Crowley broke shortly after the turnaround, as Ryf surged in an attempt to catch Charles before the start of the marathon. Charles four-minute lead quickly evaporated over the next 40 miles, and in a near replay of last year, Ryf passed Charles at mile-marker 105 and wouldn’t surrender the lead for the rest of the day. In what was no doubt the most impressive day of rewriting the record books, Ryf finished the ride in 4:26:06 after riding at an average pace of more than 25 mph. That split took 18 minutes off the previous course best.

Charles entered T2 just 1:40 behind Ryf, but the three-time champ made quick work of extending her lead on the out-and-back along Ali’i Drive. Corinne Abraham (GBR) and Crowley were the next athletes onto the run, with race rookies True and Anne Haug (DEU) not far behind.

By the time Ryf made it out to the Natural Energy Laboratory of Hawaii Authority (NELHA) and was headed back to town, her lead had grown to eight minutes, and the only question that remained was how far she’d lower her own course record. Charles remained steady in second, and the real race was happening between Haug and True for the final spot on the podium. True managed to hold off her fellow Olympian until the 22-mile mark, when Haug made a decisive pass as they headed for home.

By that point, Ryf was already storming down Ali’i Drive with a massive lead for the fourth victory in a row, but on this occasion, she was doing it in a time that seemed truly impossible at the beginning of the day. She broke the tape in 8:26:16—20 minutes, 30 seconds faster than her course record from 2016.

“What a day, I still can’t believe what happened,” said Ryf at the post-race press conference. “Before the race I said I wanted to do races that people would remember.”

Charles was next across the line 10 minutes later, posting the second-fastest time in race history. Haug rounded out the podium in her Kona debut, ahead of True and three-time champion Mirinda Carfrae, who finished fourth and fifth, respectively. All of the top ten women finished in under nine hours.

The Best of the day

What Should I Eat Before A Hard Ride? | Ask GCN Anything