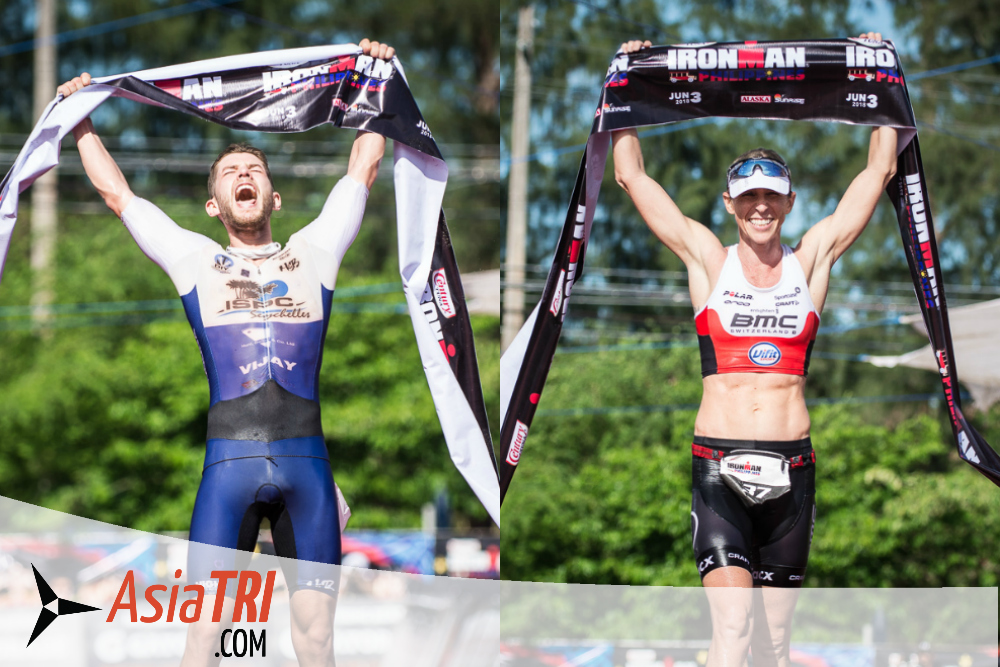 In what could be one of the hardest Ironman race in the circuit, Nicholas Baldwin of Seychelles, wins the men’s elite title of the 1st Ironman Philippines in 8:50:13, warding off a late charge by the gritty 45- year old  Cameron Brown of New Zealand.

In brutal hot and humid conditions, Nicholas Baldwin wins for himself and his country Seychelles a first Ironman win in Subic Bay, Philippines.  Baldwin has to withstand a late charge by Ironman veteran Cameron Brown.  At one point in the marathon leg, Brown has sliced his 8 minutes and 45 second deficit to 46 seconds and Baldwin within sights.   Brown has overtaken fellow Kiwi  Simon Cochrane for 2nd place around the 12km mark, and by the halfway point had registered a 1:24:47 21km split.   Baldwin simply maintained his pace, never wilted under pressure, and believed that the sweltering heat will take its toll on the chase pack.

In the end, Brown could not sustain his fast 1st lap pace, and ran 13 minutes slower in the last 21km lap.   Brown, a 12 time Ironman winner in his home country New Zealand, still registered the day’s best marathon split at 3:01:53, very impressive despite the sweltering conditions at the run course.

Baldwin maintained an almost even 21km splits on both loops, highlighting the need for consistency when conditions are eerily brutal.

“There was a lot of suffering in the run, I was trying to hold the lead. So I just gave everything in the last half, and thankfully I managed to hold on.” Baldwin stated.

See also:  First Full Ironman in the Philippines to be held this Sunday in Subic Bay

Cochrane fought to stay on the front but Baldwin and Lampret worked together to take the lead after the halfway point in the bike leg.   Most of the bike leg was within a closed 2 lane freeway, but it was rolling and windy.   A late morning gush of rain provided temporary relief.   After the u-turn for the final loop on the freeway, Baldwin steadily pulled away, turning a 3 second lead to Lampret into an impressive 4:56 gap over Cochrane.  Baldwin’s 4:45:53 was the best bike time of the race.   Lampret has faded on the 2nd loop of the course and dropped to 4th entering T2.

Brown added on not sustaining his chase to take the lead: “I was able to shorten the gap to 46 seconds and maybe caught more than 9 minutes so quickly.   But so probably I went out too hard.   The last 10k are always hard, and with this heat, it is brutal.”

One year after becoming a new mom, Liz Blatchford was still a pre-race favorite coming into the race but was unsure of the expectations after a long lay-off.   In her first Ironman race after giving birth, Blatchford dominated the women’s elite race, combining her women’s best swim and run splits to win in 9:22:22, even placing 4th overall, only the men’s pro podium ahead of her.

Blatchford steadily increased her lead, even with the changing spots in the chase group.   By km 45, Duke has overtaken Selsmark for 2nd place with Blatchford leading by 2 minutes and 24 seconds.     Km 92 saw Simon Maier of New Zeland moving into 3rd right at the back of Duke.  Again Blatchford has increased her lead, this time to 3:42.

Entering T2, Blatchford has increased her lead to 9 minutes and 31 seconds.   Duke and Maier were 2nd and 3rd to T2, with the latter stamping the women’s best bike split at 5:02:05.

With empty roads to conquer and no pressure from her competitors, Blatchford ran the day’s best marathon split among women for a time of 3:19:22.   In the end, Blatchford placed a gap of 18 minutes and 23 seconds over runner-up Duke and 25:16 over Simon Maier.