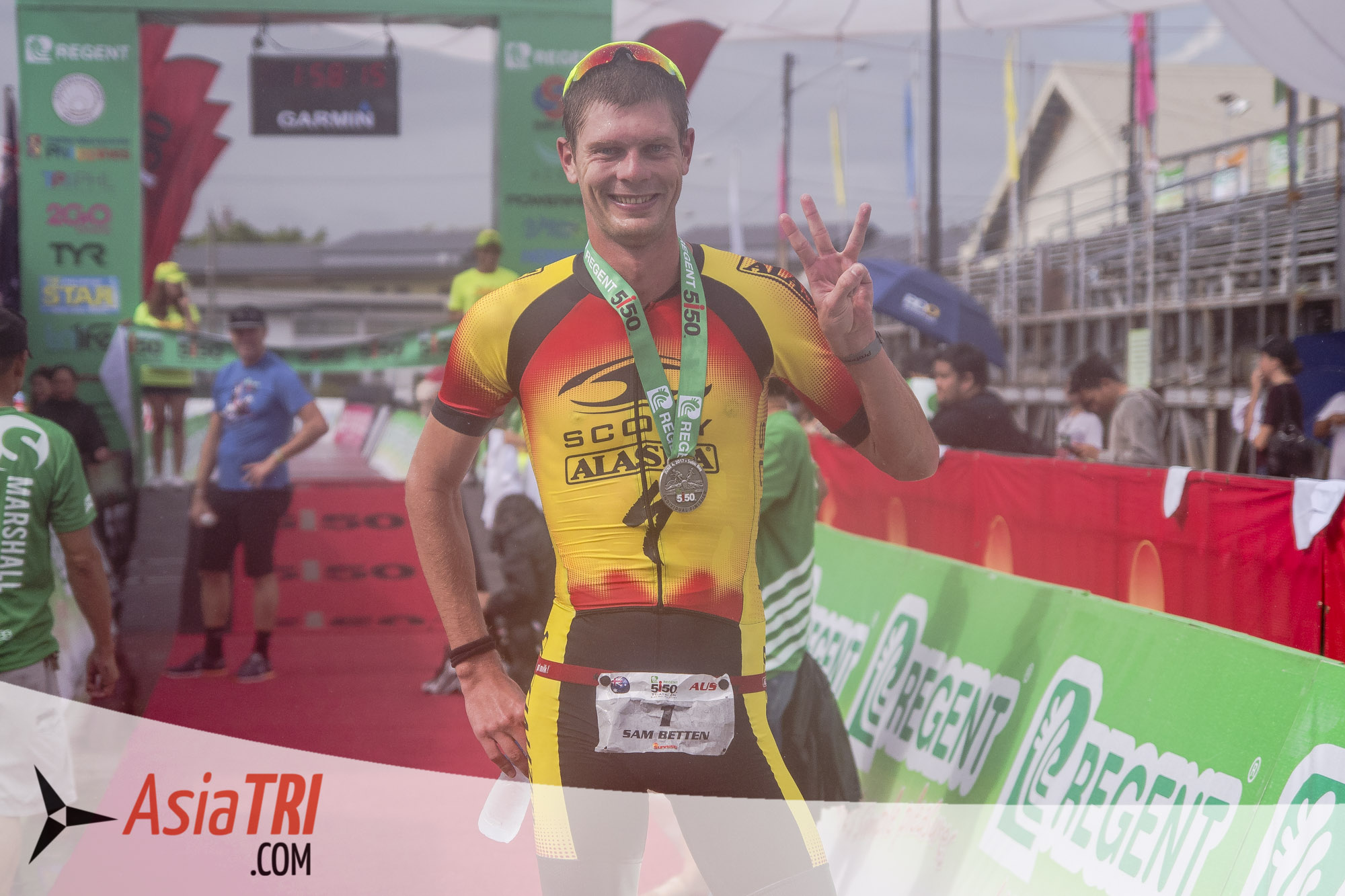 Sam Betten (AUS) dominated his way with a wire-to-victory on his way to grabbing his 3rd consecutive title at the 5150 Subic Bay, Philippines.  Dimity-Lee Duke (AUS) finally captured the women’s elite title, after finishing 3rd and 2nd the previous two years.

In a slim field of Pros on the start line, which also includes the battle for the asian men’s elite, Sam Betten of Australia came out of the water first with a time of  19:57.  It was a fast start for Betten, as he already took a 1 minute and 33 second lead over fellow Aussie Mitch Robins who timed 21:30, and was closely followed by American Iain Alexandridis (21:34).  Nikko Huelgas of the Philippines was in the company of Robins and Alexandridis, leading the way for the Asian Elite at 21:33. Just as Betten transitioned for the bike, he came off hot as rain started to fall all throughout the bike course.  With temperatures down, and a controlled aggressiveness on the wet course, Betten meticulously added on his lead, as he posted the fastest bike split of the day, timing a 59:30 split on the 40km, multi-loop leg.  Robins tried to catch up, but the deficit just got larger as he timed the 2nd best effort on the bike with a 1:01:59 split.  Alexandridis came into T2 third, after posting the 3rd best split at 1:02:41.

With a clear run course ahead of him, and no typical energy-sipping heat to tackle on, Betten just would not be denied on his way to his 3rd straight 5150 Subic Bay title, as posted the 2nd best run of the day at 35:28.  Betten would go sub-2, finishing with a time of  1:55:58.  The best run split belongs to top Filipino short-course athlete John Rambo Chicano who posted a time of 35:21.  Chicano also bagged the Asian Men’s Elite title, beating his teammate at the national team, Nikko Huelgas.   Robins and Alexandridis completed podium for the men’s elite category.

See also:  Video: How To Train For Mountains If You Don't Live Near Any “I felt really good out there. The heat wasn’t too bad so I didn’t have to push quite hard (than usual), which was really advantageous to me. If it were really, really hot, it would have been a different story,” said Betten, who will be back in the Philippines in August for Ironman Cebu 70.3.

Laura Wood of New Zealand came out of the water first at 22:10 but was closely followed by Filipino Pro Kim Kilgroe, 3 seconds off at 22:13.  The chase pack of Dimity-Lee Duke and Annelise Jefferies (AUS) came out 2 minutes and 38 seconds later. With some familiarity of the course and no heat to think off, Duke got off to a blistering pace at the bike, chopping off the deficit, and would take the lead from Wood at the mid-point mark of the bike leg.  Duke posted the day’s best bike split among the women, with a time of 1:06:20.  Wood and Anna Eberhardt of Hungary would follow Duke at T2.  With a clear advantage of more than two minutes, Duke cruised her way to her 2nd win in Philippine soil, finishing in 2:13:32, a 1 minute 39 second win over wood.  Eberhardt, a noted bike-run specialist, came off with the women’s best 38:21 run split, would eventually run out of miles and would finish third.