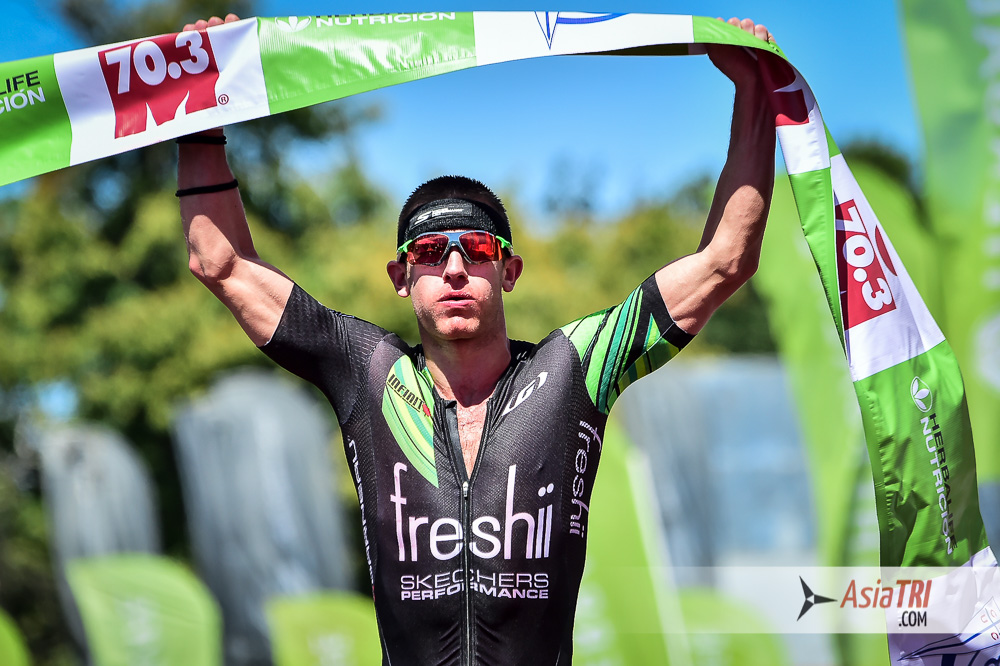 Lionel Sanders emerged from the cold clutches of the Canadian winter to take the victory while Barbara Riveros come from behind performance on the run cemented her third win at IRONMAN 70.3 Pucon.

Sanders too tough to tame in South America

It was an all Chilean cast of characters as Vicente Trewhela, Gaspar Riveros, Felipe Barraza, and Felipe Van de Wyngard lead the way out of the water. Pre-race favorites Jesse Thomas (USA), and Lionel Sanders (CAN) were both looking at close to a four-minute deficits to the leader as the pair scrambled onto the black lava sand beach of Villara Lake and headed towards T1. Once the bike, Sanders started picking off those in front of him and had powered his way toward the front end of the race. Wyngard would end up being the only rival to come close to matching Sanders prowess on the bike and would be left gripping a tentative 53 second advantage on the Canadian at the conclusion of the 90-km bike.

Sanders, now in his element on the road, quickly disposed of Wyngard and grabbed the lead. Barraza backed up his solid swim and bike with a one of the races better runs on the day while Luciano Taccone was lighting it up out on the road and picking off a few men in front of him throughout the 21 kms. Sanders, with his signature blazing run claimed his first win of the 2017 season by a six-minute margin over Barraza who held off the late charge by Toccone by a mere five seconds.

Riveros makes it a hat trick of wins at home

Haley Chura once again put on a swim clinic in a solo effort that watched her nudge out swim standout Macarena Salazar (CHL) to win the first leg of the race and come out about 15 seconds faster than Alicia Kaye (CAN), and Barbra Riveros (CHL). The only story on the bike course was Kaye crushing the field for the entire ride—she biked seven minutes faster than her closest rivals. She managed to build up over six-minute advantages on Riveros and Chura at the end of the bike and headed out of T2 in what appeared to be an insurmountable lead.

Riveros, a three time Olympian was out on the run course in second and immediately started chewing into Kaye’s lead at a steady rate. The gap between the two continued to narrow for much of the run, yet there was still 90 seconds between the pair with three kilometers go. It appeared that Riveros may just run out of real estate before bridging the gap to the leader. A late surge put in by Riveros, spurred on before a partisan crowd, propelled her into the lead with a kilometer to go in the race. Riveros pushed herself to the end, capturing her third successive IRONMAN 70.3 Pucon win by a 30 second winning margin over Kaye.