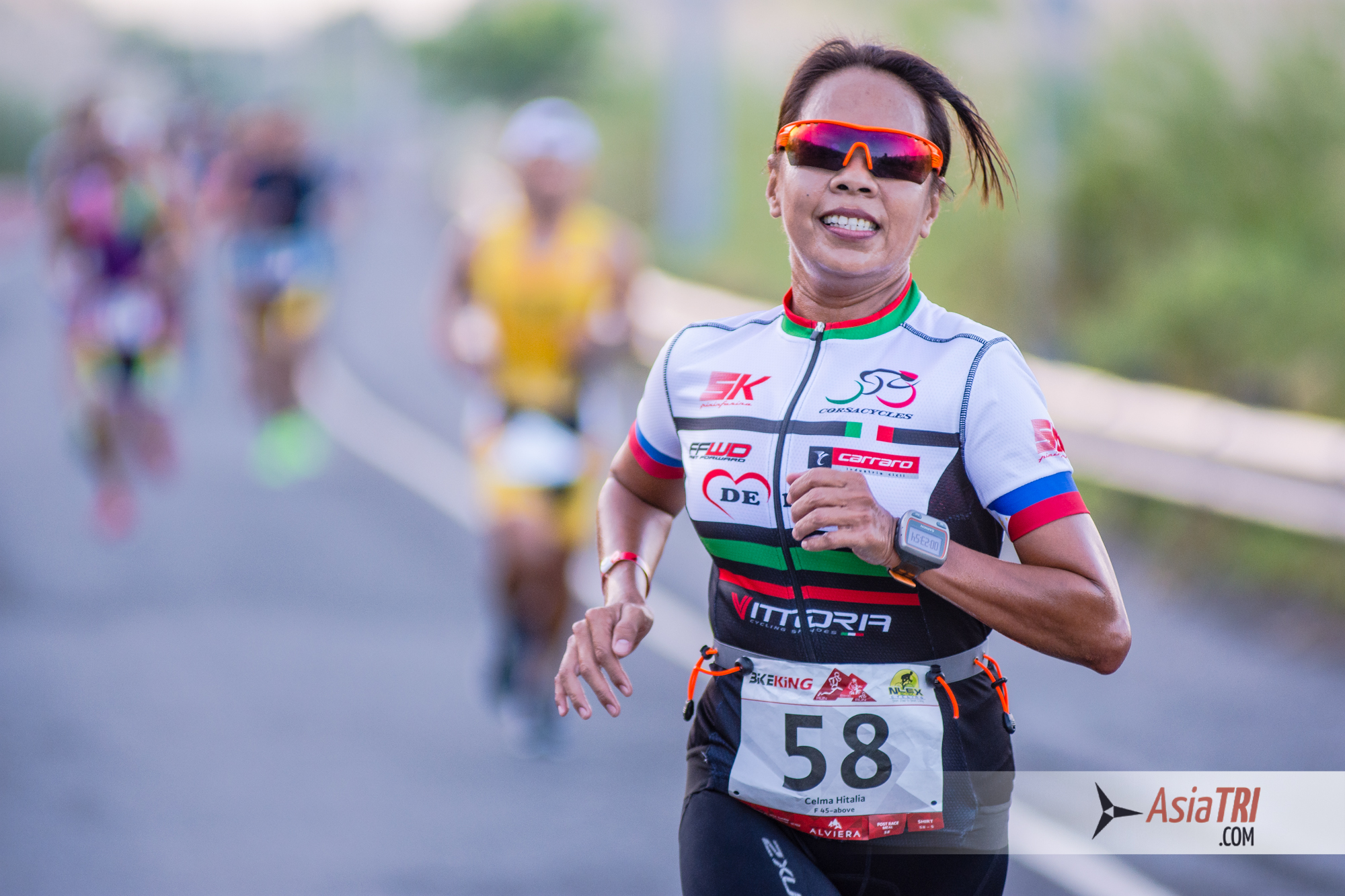 Celma “Chang” Hitalia is a logistics manager at a Japanese firm based in the Philippines.   In between her demanding work and tending to family life, she has excelled in her running and triathlon pursuits.  Her highlight of the year is grabbing a Kona slot in Hefei, China.  We also caught up with Chang for a short chat in Powerman Philippines, where she finished as the top overall women age grouper. Know more about her in our interview.

AsiaTRI: How did you start in the sport?

Chang: In mid-2009, I joined a running group in my quest to lose unwanted pounds and start a healthy lifestyle.  I began joining fun runs.  My run targets changed drastically that in a year I was able to complete 3 marathons and an ultramarathon.  It was mid-2010 when I became interested in triathlon.  While majority of my running friends continue their journey to ultramarathon, some switched into triathlon.  The excitement of doing swim-bike-run in one event fascinated me and in 2011, I did my first standard distance and my first 70.3.

AsiaTRI: What were your memorable races?

Chang: In triathlon, memorable is the Ironman Langkawi in 2014.  It was my first full Ironman and first race in a foreign land.   I finished strong and bagged 2nd place besting other female athletes in my age group of varying nationalities. Next memorable of course are the Hefei and Xiamen where my combined performance earned me the much coveted Kona slot.

In running, it’s the Asia Masters Athletic Championship 2016 in Singapore where I qualified to represent the Philippines.  It was an honor for me to be given the opportunity to compete with equally strong and competitive track and field athletes from different parts of Asia in my age group .  With love and pride for our country, I was able to bring home the Silver for the 5000m, Bronze for the 1500m, and another Bronze for the 4x400m relay.

Chang: 2016  is a very exciting and special year for me.  Besides KONA, it was my first time to have four (4) Ironman 70.3 in a year, two of which were out of the country.  I also had the usual one (1) long distance, three (3) standard distances, aquathlon and duathlons all with a podium finish.  I always treat every race as a new experience, a new adventure, an exciting opportunity to improve my performance, appreciate results, work on the imbalance, meet new friends, and be one with the tri community.

AsiaTRI: You are one of the few Filipinos who have garnered a Kona slot, can you re-tell the process on how you got there? Is going to the China races a strategy for you and Coach Ani to get the coveted slot?

Chang: Coach Ani was the brain behind all of this.  We were supposed to do Ironman Taiwan.  She was the one who found out about the inaugural 70.3 Ironman Hefei and 70.3 Ironman Xiamen, the Kona slots to be given to top age groupers and the special 10 slots for those who will join both.  We had a meeting and she persuaded me to join her in China since, she said, I have a big chance.   Winner of the special slot will be determined thru ranking on both events.  Like me, I was 7th place in Hefei and 4th place in Xiamen so 11 was my total points.  Irregardless of age and gender, whoever get the 10 lowest points will have the slot.  It was not easy!  We have to hammer it all  in both races to ensure a good ranking plus the fact that we had to compete not only with the female but also with the male as well. AsiaTRI: Your exact emotion upon learning you got the slot.

Chang: HAPPY, THANKFUL, EXCITED … mixed emotions, it’s KONA!  Coach Ani was 10 points so she was awarded ahead of me.  When the announcer said “and the next slot, from F50-54 …” We both screamed with excitement!  My name has not been called yet!  The announcer had to jokingly say – “Disqualified for being too noisy ..” hahahaha … and he had to repeat it again, this time we waited for my name to be called and we screamed loudly again.  We were so happy we didn’t care how embarrassing it must have looked.  The announcer even said ‘it’s great to see someone happy and excited to get a slot’ … who wouldn’t be happy and excited?!!?!  It is every triathlete’s dream!

See also:  Video: 5 Ways To Make You A Better Cyclist

AsiaTRI: Can you share us the challenges you have to endure, training as a high performing age-grouper in the Philippines, and have to juggle work and family?

Chang: We all know how demanding triathlon is in terms of time, cost and effort. The most challenging is the training itself; the effort that you have to put in and since I have an 8-hour, 5-days a week job and a family to look after to, it is a continuous struggle to make sure that I balance my time for work, social obligations, training, and most of all, family.

AsiaTRI: Your 2017’s A race will be Kona. How is the road to Kona mapped, in terms of scheduling the tune-up races, and if Coach Ani has a special program for you leading up to the race in October?

Chang: As per initial meeting with Coach Ani, races for 2017 will be Century Tuna 70.3 (of course!),  ASTC Subit, Tri United 2 and Cobra Ironman 70.3.  First quarter is mostly to keep me well conditioned. Then the 4 months before Kona, we plan to build up.  In between races, we will hit the mileages we need to hit and get used to similar conditions like training with heat, wind, hills and practice nutrition.

2017 will be a very busy but a more exciting and challenging training and racing season for me.