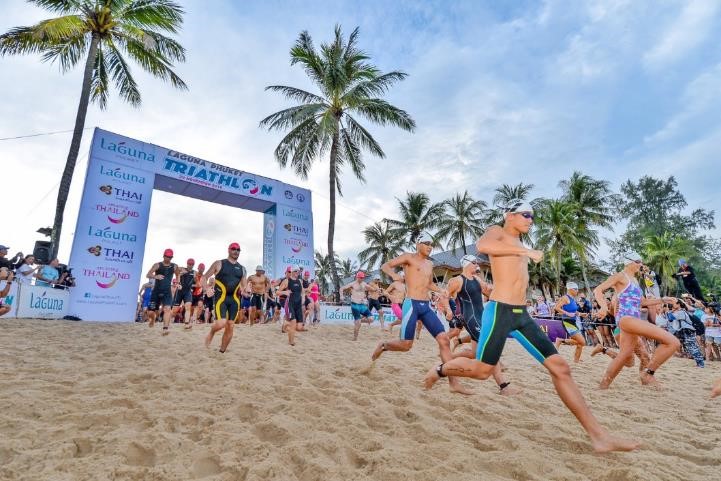 The TV show for 2016 LPT race which took place on Sunday 20 November will be broadcasted nationally for interested audiences and aspired triathletes in Thailand on Tuesday 3 January, 3pm-4pm on Thai TV Channel 7.

Dubbed “The Race of Legends”, LPT athletes’ field saw impressive elite pros from around the world. Headed by defending champions Michael Raelert of Germany, title holder of 2015 Laguna Phuket Triathlon who finished in 02:19:13s, successfully defended his title and broke his own record from last year. Followed Raelert home in second and third places were France’s Antony Costes (02:21:18s) and Brad Kahlefeldt of Australia (02:23:21s). In the women’s field, it was Laguna Phuket Triathlon’s first-timer Amelia Rose Watkinson from New Zealand in 02:36:29s, who has an impressive year of winning 9 out of 10 races. Followed Watkinson in second was World Duathlon Champion Emma Pallant of Great Britain (02:42:30s) who then saw Laguna Phuket Triathlon’s triple winner in the women’s field Radka Vodickova of Czech Republic in 3rd at  02:43:22s. All winners took their share from USD 20,000 prize money.

From the field of more than 1,100 athletes with athletes’ followers and supporters travelling to Phuket, the race is estimated to generate more than 74 million baht spending in tourism segment for Phuket Province. Hotel room and food & beverage revenues generated for hotels and business units in Laguna Phuket is approximated 9 million baht during the race weekend.

In addition to the revenue generated for Phuket’s tourism segment and local community, Laguna Phuket also leverages on this mega event as a meaningful platform for athletes to raise funds through donations and sponsorships for the Resort’s long established Laguna Phuket Foundation, to operate its various charitable programmes. Athletes made donations via online event registration and at the donation booth at the event. Over the course of 20-plus years, millions of baht was raised and used in the operations of Laguna Phuket Foundation’s many educational empowerment programmes such as Mobile Learning Centre, Community Learning Centre, Laguna Phuket Kindergarten and Seedlings Phuket Internship Programme.

11 Tips to Qualify for the Kona Ironman World Championships