German Domination in Kona: A Look at the Numbers 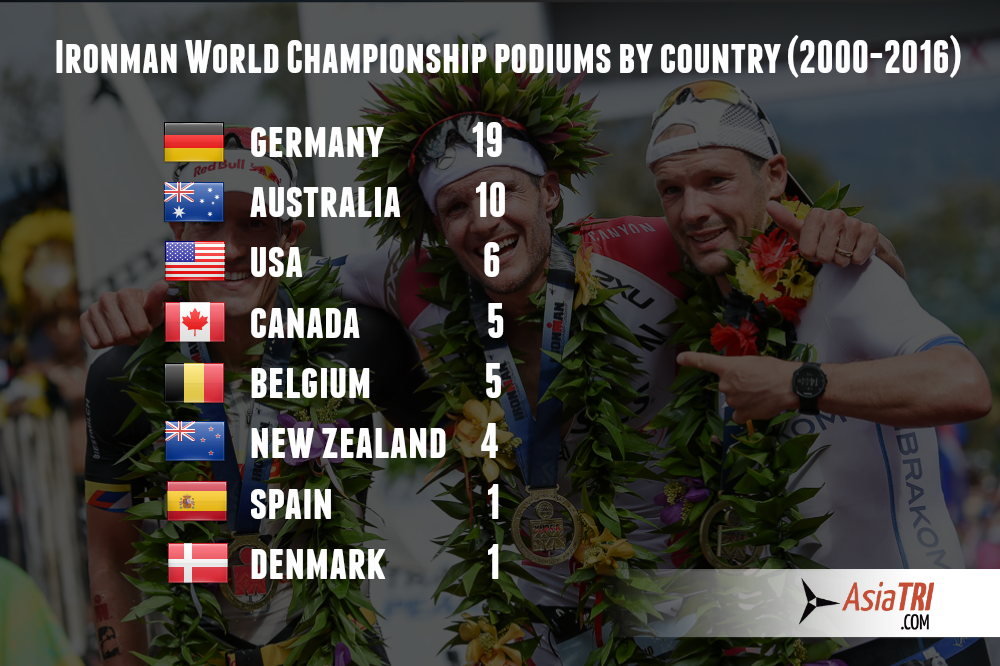 The recent all-German podium in Kona highlights a growing trend in dominance by Germany in the men’s categoryof the Ironman World Championships.  Consider these numbers:  Germany put five men in this year’s top 10.   In the last five years (2012-2016), Germany was in the podium in 9 of the 18 spots.  Going further back as shown in the graphic below, and Germany has the most podium spots since 2000, and by a wide margin.

Australia on the result of their dominance from 2007 to 2012, winning six straight titles courtesy of the Craig Alexander, Chris McCormack and Pete Jacobs, landed 10.  And former powerhouse USA has 6.

Speaking of the United States, as the birth country of the sport, expectedly dominated the early years, as shown in the graphic below.

In podiums from 1978-1999, the United States put a staggering 46 men out of a possible 69 podium spots.  The strength of the United States from 1978 to 1995 can be attributed to the success of Ironman legends Dave Scott and Mark Allen who has 12 titles between them, and also the less-heralded Scott Tinley who is twice an Ironman world champion.   But when Australian Greg Welch broke through in 1994, ending the United States’ 17-year consecutive reign (and breaking Allen’s 5 year dominance), it put the American dominance in the Ironman World Championship in a spiralling hole that it has to yet to recover.  While Allen regained the title in 1995, only one other American won since then, and  it was 2001-2002 champ Tim DeBoom.

See also:  Women For Tri Announces 20 Races that will Provide a Total of 500 Additional Women The Opportunity to Compete in the 2020 Ironman 70.3 Worlds

Since 2000, only 3 other Americans landed on podium.  Ben Hoffman’s surprising runner-up to Kienle in 2014, Timothy O’Donell’s 3rd place in 2015 and the nearest to break the slump, super-cyclist Chris Lieto’s runner-up finish in 2009.  Surprising is not usually a word to associate when an American lands on a Kona podium , but nowadays,  without any clear strong and emerging American in the long-distance triathlon circuit, the United States has yet to find its next great hope.

Australia is also in a bit of a slump too after Alexander and McCormack walked away from Kona.   While they are tied with Germany for the most titles since 2000, they have not sent an Aussie on the Champion’s podium since Pete Jacobs’ 2012 win.   Luke McKenzie’s runner-up finish in 2013 was the only other time since then that Australia podiumed.  in In the recent 2016 Kona, no Aussie landed on the top 10, and their top finisher, Tim Van Berkel, finished 19th.

Going back to the Germans, the trend and their list of athletes seemed to point that their dominance will not end soon.   Jan Frodeno is the definitive complete triathlete that shows no weaknesses on any discipline.   Kienle, despite his weakness at the swim, is young at 32 and an uber-cyclist like him will always be a force in Kona.  Another uber-cyclist and best bike-split holder Boris Stein (7th place, 2016), 5th place Andi Boecherer, and surprise best runner in Kona, Patrick Lange are all spry and all in their early-30s.

While USA still lords it over on the all-time count as shown on the graphic, the globalization of the sport, and its rising popularity means no country can dominate Kona the way the Americans did in the early years.

Perhaps, Great Britain and Spain, with their strong ITU programs,  would like to be included on this list when their  world champions like Alistair and Johnatan Brownlee, Javier Gomez and Mario Mola retire from ITU racing.  The dynamics though are vastly different, and surely it will need another article to discuss it with.    But Jan Frodeno proved it can be done, to translate short-distance ITU speed to the brute strength and hard endurance in racing Kona.  He did it twice and is definitely not done yet.

Video: How To Pace A Time Trial Like A Pro