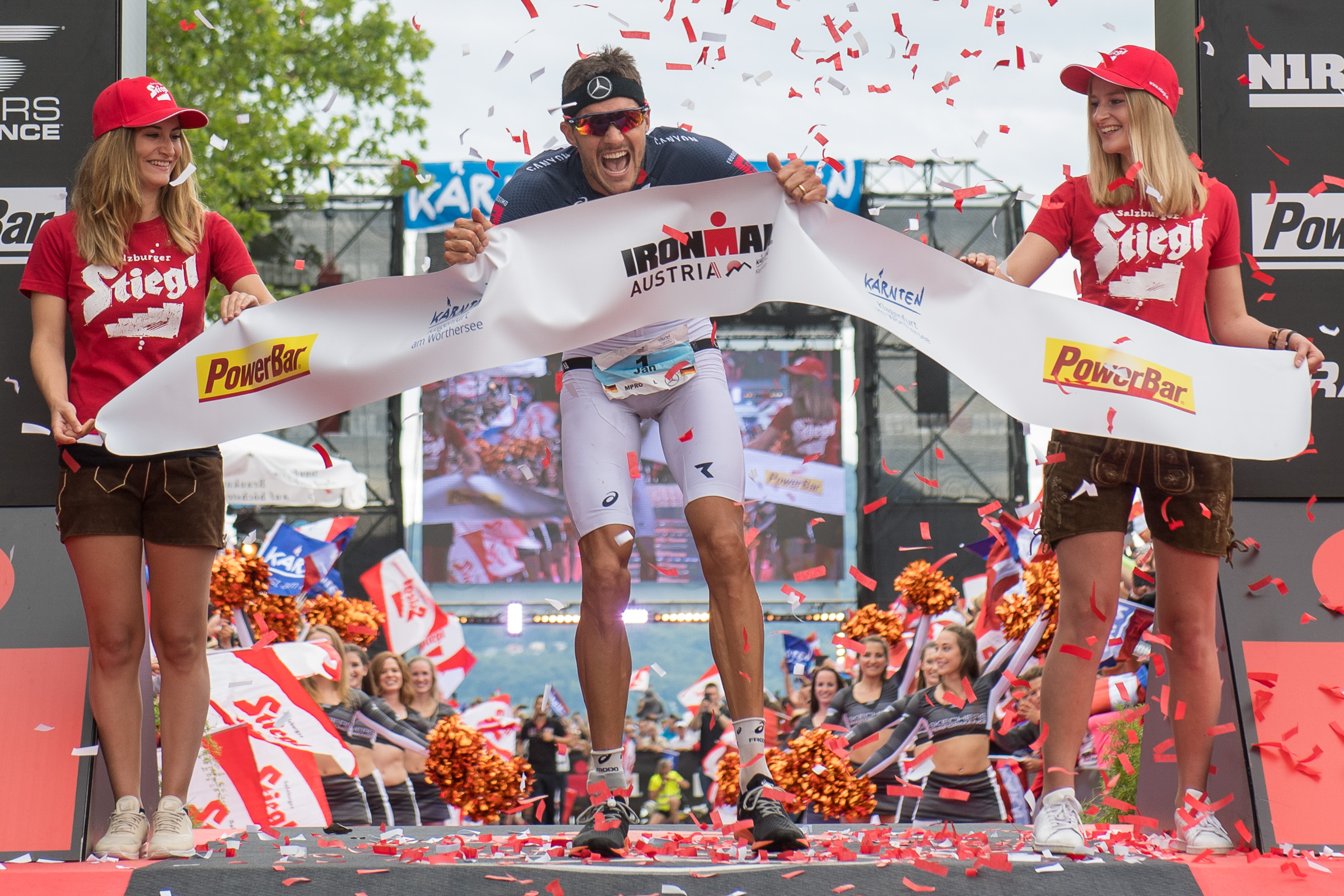 With the recent trend of Iron-distance records falling at fast courses, and a pro startlist that includes Ironman world champion Jan Frodeno, there is no doubt that there was a buzz that another record would be broken in Ironman Austria this weekend.  But with a viral infection that hampered his preparation in this race, Frodeno adjusted his goal but still won in  dominant fashion, taking Ironman Austria in another sub-8 finish (7:57:20).  His margin of victory was 15 minutes and 23 seconds over Enako Llanos of Spain, and his splits in the swim (46:29), bike (4:19:45), and run (2:46:09) were all race-best.

Eva Wutti of Austria, used the strength of her women’s best 2:57:43 marathon to take the lead and win in 9:06:25, a 1:38 margin of victory over Corrine Abraham of Great Britain.

Around the 90km mark,  Frodeno had over 8 minute leads over Llanos, Paul Ruttman (AUT) and Costes.   A  blistering 4:19:45 bike split gave Frodeno a 13:38 and 13:39 lead on Llanos and Costes.  His bike split was so dominant that it 8 minutes and 8 seconds faster than anyone else on the field.  Frodeno, despite his viral infection weeks before, still had the strength to post the race-best run split of 2:46:09 which gave him the win.  His win was 11:22 behind the Kärnten race record set by Marino Vanhoenacker in 2015.

Vesterby looked strong on the bike, and despite a spill near the end of the course, she still registered the women’s best bike split at 5:00:11.   Corrine Abraham kept pace, finishing the leg in 5:00:12, only a second difference behind Vesterby’s split.  That would be enough to enter T2 in 2nd place, still 6 minutes behind Vesterby.  Wutti clocked a 5:04:39 split and would enter T2 in 3rd place.

Wutti did not waste time and  flew on the first half of the run, decreasing her deficit by 2mins on Abraham and Vesterby in the first 5km. Wutti kept the pace on and would eventually take the lead before the 21km mark of the marathon.  Vesterby faded and would also lose her 2nd place status to Abraham.

(Photo by Getty Images for Ironman )