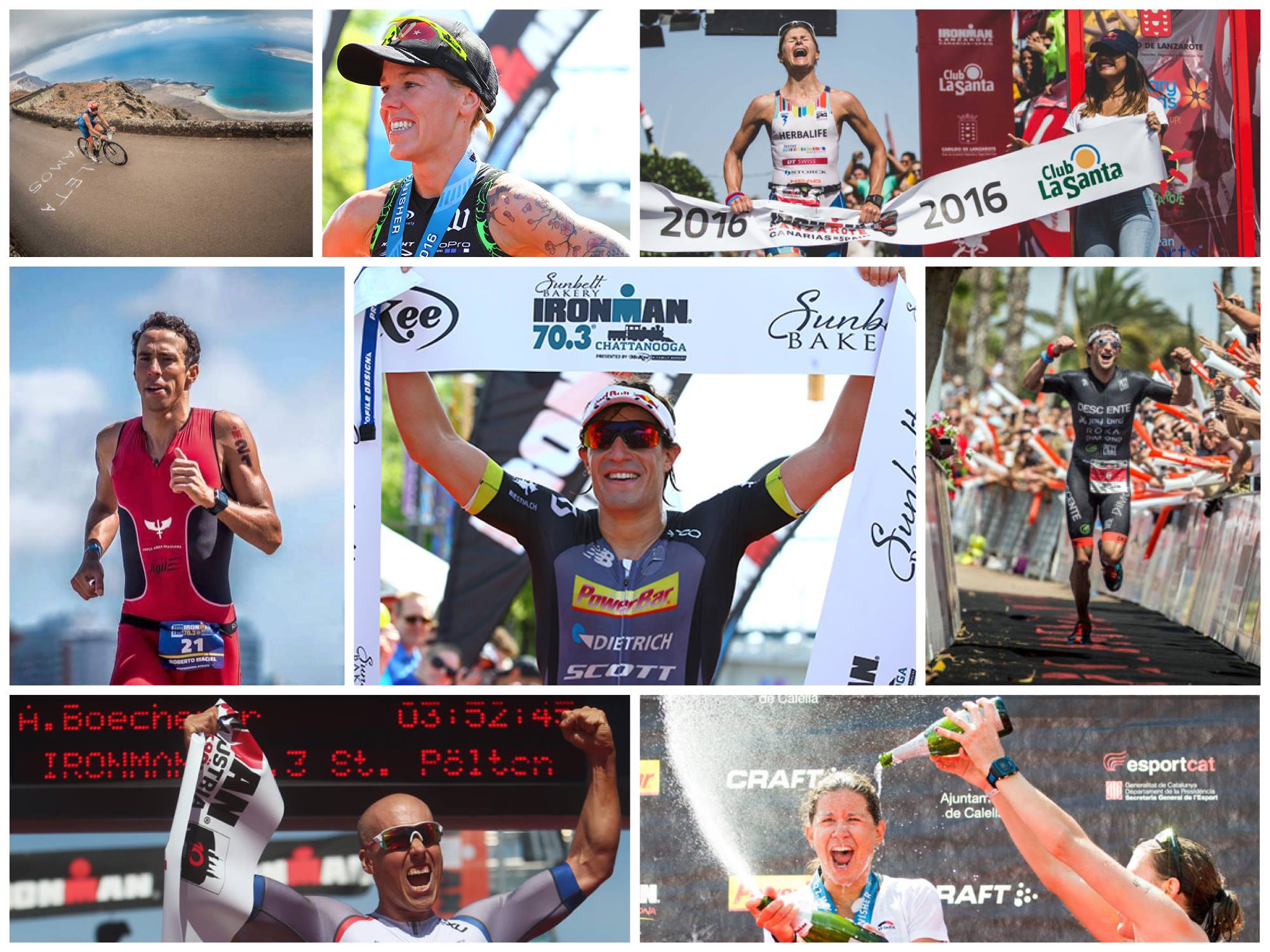 It was a busy weekend in the Ironman and Ironman 70.3 circuit, the season is starting in the Northern Hemisphere and in the past weekend we saw some of the world’s best at Ironman Lanzarote, Ironman 70.3’s Barcelona, Chattanooga & St. Polten

It was an exciting day on the Spanish island at one of the most challenging ironman races of the world tour. Endless climbs and strong winds are the scenario for this race.  USA Jesse Thomas surprised everyone and beat current World Champion Jan Frodeno (GER); on the women’s side, Danish athlete Tine Holst took home the win. 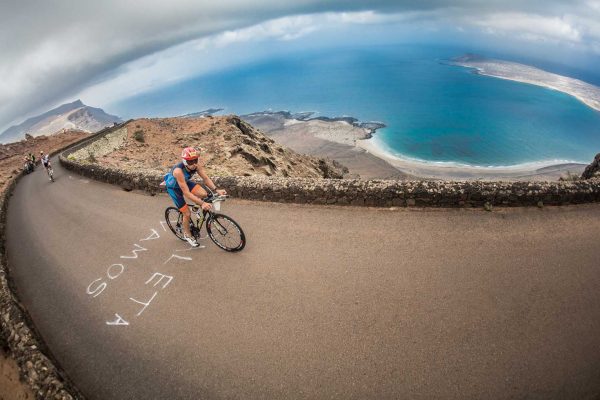 All eyes were on IRONMAN world champion Jan Frodeno when the pro field headed into the water at the Playa Grande in Puerto del Carmen. Due to an injury, the German IRONMAN star had to withdraw from the IRONMAN African Championship in early April; today he seemed to be racked and ready for another great win.

It was no surprise that Frodeno took the lead in the water immediately. He set the pace right from the start and led a group of nine. Frodeno eventually exited the water in 46:53, which meant one of the best swim splits in the history of this legendary race. Brits Stephen Bayliss and David McNamee were only a few seconds behind the leader, as were Germany’s Johann Ackermann and Spaniard Ivan Rana.

Everyone seemed to be waiting for a great Frodeno show on the bike after his stunning performances last year at the IRONMAN European Championship Frankfurt, at the IRONMAN 70.3 World Championship and at the IRONMAN World Championship. But today, the favorite had another opponent: his helmet. It took Frodeno more than two minutes to get his helmet on properly in T1 while Bayliss stormed onto the bike course with McNamee, Ackermann, Rana, and others. It was then on McNamee to lead the race for about two hours up and down the tough course until Ackermann took over. He led the pro field not only to the famous top of Mirador del Rio, but also back into Puerto del Carmen and to the transition.

Once on the run, Ackermann started feeling the extremely windy day and rising temperatures and slowed. Frodeno, now in runner-up position thanks to a fast bike split, made his move to the front over the first few kilometers. The picture didn’t change for 15 kilometers until a flying shadow appeared to make the move of the day: Jesse Thomas jumped into first place as if not even thinking about the legendary career and the mental and physical strength of Frodeno. Thomas raced as he had done last September at his first-ever IRONMAN race in Wales: run to the win.

Thanks to the fastest marathon and a very consistent performance in the water and on the bike, the 36-year old took his second consecutive win in his second-ever IRONMAN. “I’m over the moon,” Thomas said, “I knew it would be super difficult here. It just came together today.” Frodeno took silver in front of another athlete with a huge smile on his face: McNamee felt like a champion when he crossed the line in third place.

Holst puts together a perfect day

In Lucy Charles’ first IRONMAN as a pro athlete, the great swimmer placed herself in the men’s lead group to exit the water in the top 10 overall. When Charles came out of the water, other favorites like defending champion Diana Riesler from Germany were way behind. Thanks to her 47:11 swim split she had an advantage of 7:41 over local hero Saleta Castro, and Riesler was already 10 minutes behind.

Charles didn’t slow down on the bike and didn’t overpace herself either. She put the pedal to the metal and led the race in a clear way until she had to jump off the bike. Riesler and other big names were minutes behind, but Tine Holst had been biking on the tough and super windy course like her legs were made of Danish dynamite. She posted the best bike split by far on the course —which includes more than 2500 meters of climbing—and reached T2 only seven seconds behind the British leader Charles.

Early on the run, Holst made the pass. While the runner-up of 2015 IRONMAN Vichy never looked back, Charles first had to fight with Riesler for second place until the defending champion started cramping on the second half of the run. Charles showed a very consistent and impressive performance, but she finally had to give the runner-up position to a flying Belgian: Alexandra Tondeur ran into second place, thanks to the best marathon, ahead of Charles. 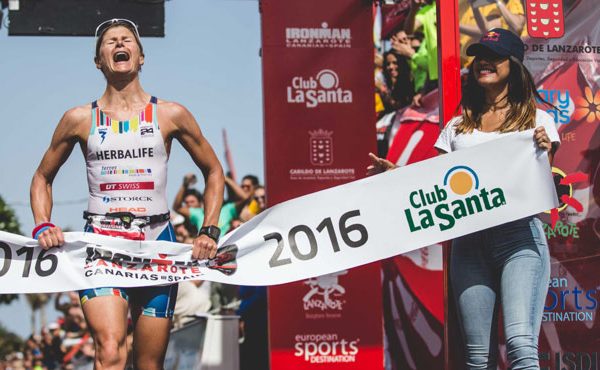 Once on the bike, Kienle quickly moved to the front of the race with Appleton being the only one to come close to matching the two-time IRONMAN 70.3 world champion’s pace. The Kienle-Appleton runaway train stormed into T2 within seconds of each other and with almost 8-minute advantages on Kyle Buckingham (ZAF) and and Matt Russell (USA) who dismounted their bike in third and fourth positions. Tutukin, Griffin, Metzler, and Kramer came off their bikes less than a minute after Buckingham and Russell in what now appeared to be a six-man shoot-out for third place.

Appleton kept the 2014 IRONMAN world champion in his sights early, but Kienle steadily expanded his lead by knocking off 5:50-minute miles throughout the 13.1-mile run. Behind Kienle and Appleton, Tutukin, a former ITU athlete, was unleashing a blistering run (5:38 pace average) which propelled him into third place by mile 3. Kienle was able to cruise his run in for the closing miles to capture the the title with a 1:59 winning margin over Appleton and 6:17 over Tutukin.

Jackson on a mission in Tennessee

It didn’t take Jackson long to get to the front of the race in the early miles of the bike and build up a two-minute gap on Tisseyre by 30 miles. Another minute back, Seymour, Barnett, and Carfrae tried to limited their losses to the hard driving Jackson up front. At the dismount line, Jackson had what looked like insurmountable leads of five to nine minutes on the rest.

In the open half of the run no one was able to eat into the Jackson’s lead. After six miles, Tissyere was looking at a seven-minute deficit while Carfare would overtake Seymour and Barnett for a solid hold of third. In the final miles, Jackson was able to take her foot off the gas and claim the win comfortably over Tisseyre (6:38) and Carfrae (7:37) who finished second and third.

Smart tactics pay off a lot in long-distance events. Swede Patrik Nilsson was working hard for the win at IRONMAN 70.3 Barcelona, but moreover, was waiting long for the right moment to make his move. When Guillem Rojas (ESP) led the men’s pro field out of the water in 23:25, Nilsson was in 11th, but only 11 seconds behind and already in the mix.

On the bike, it was on him, Germany’s Maurice Clavel, and Sylvain Sudrie (FRA) to make an early break away from the strong pro field including fast runners and weaker swimmers like Alessandro Degasperi (ITA). On the second half of the bike, Clavel pushed to open up a gap to his two chasers. After being runner-up at the IRONMAN 70.3 Pays d’Aix three weeks ago, he was hungry for the win. Clavel had a strong run, but with three kilometers to go Nilsson made a decisive attack and sprinted, making the ultimate strike for the title. Behind those two, Sudrie secured third place.

The women’s race became a real “Emma day” on the bike and run. American Heather Lendway and Carina Brechters (GER) seemed to be a bit off and away after the swim in 24:40, but the tough bike course generated a lot of position changes.

Emma Bilham had the best bike split by far and was in the lead after only a third of the hilly bike course. She started into the run with an advantage of seven minutes over Binaca Steurer (AUT) and Swiss Regula Rohrbach. Bilham eventually had no problems running home the victory; Pallant moved into runner-up position very early, ahead of Steurer.

Andreas Böcherer nailed down an awesome performance to take his second consecutive win in St. Pölten. The German ruled this race, especially on the bike course, forcing his opponents to show their absolute maximum.

Böcherer controlled the pace during the swim together with Austria’s Martin Bader and exited the water directly behind Bader in 24:54. The Swiss Ruedi Wild and Marino Vanhoenacker were behind those two, but Vanhoenacker had to call it a day soon. Due to a technical issue with a tire the seven-time winner of IRONMAN Austria had to drop out after 30 kilometers. Böcherer seemed to be super relaxed on the bike although the gap to Wild and Austria’s Paul Reitmayr in third was not more than a minute on the first 60 kilometers. On the final part of the bike stretch, Böcherer then put down the hammer, reached T2 with a lead of nearly 3 minutes over Wild and ran straight to win.

The women’s race looked a bit like the competition last year with a great swim performance from Anja Beranek. The defending champion had Russia’s Anastasia Chernenko at her neck when she came out of the water in first place, but strong riders and runners like Yvonne van Vlerken (NED) and Laura Philipp (GER) were almost 2 minutes behind.

Beranek added a fast bike split, but van Vlerken was only 1:18 behind when they started into the half marathon. While the Dutch made up second by second with every kilometer, IRONMAN 70.3 Mallorca champion Philipp was flying on the run course. Thanks to the best half marathon performance she took over the lead after 15 kilometers and let van Vlerken and Beranek battle out for silver behind her.