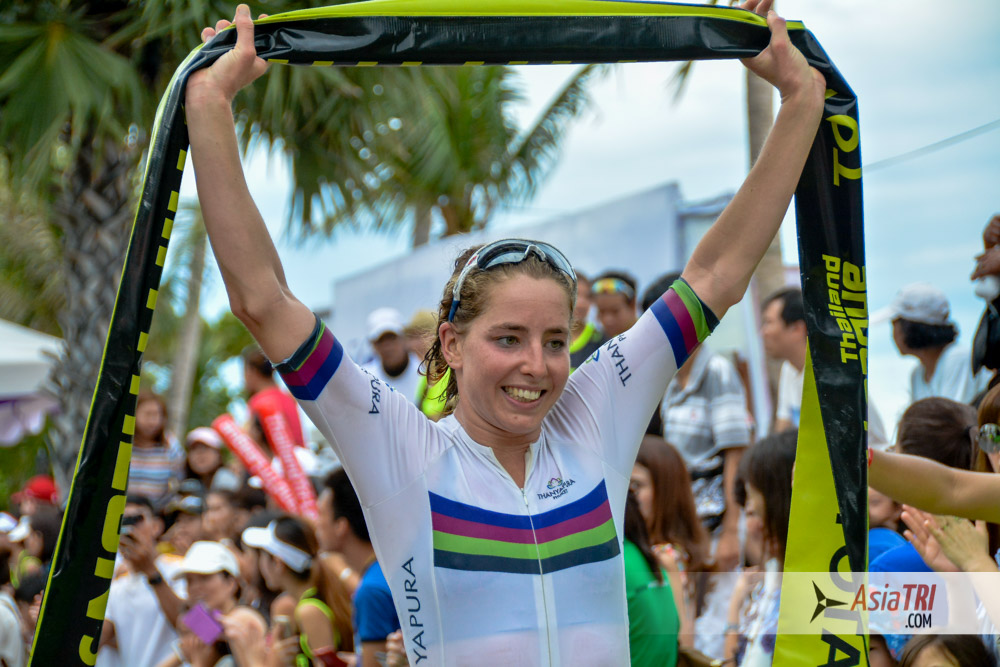 The second edition of the Pattaya Triathlon was also the second race of the year of the Thailand Tri-League Series, the event had over 1.700 athletes taking part in two different distances: 1.5km swim, 54km bike, 13km run and 750m swim, 25km bike, 8km run.

Among the pre-race favorites it was defending Champion Mitch Robins, who is coming off a 2nd place to Craig Alexander at Ironman 70.3 Busselton and Fredrik Croneborg, who won the series in 2015. Four time world Champion Chris McCormarck also took part of the race in the sprint distance, but crashed into a pothole early on the bike breaking five spokes and being unable to finish the race.

The women’s field was the most competitive the Series had seen with defending Champion Dimity-Lee Duke, Renee Baker, Amelia Watkinson, and the Duffield twins Kate and Michelle

The event also marked the first win to the newly formed Thanyapura Triathlon Team, the 6-members team will represent Thanyapura, the world class sports facility around races in Asia.

Mitch Robins was the first out of the water in 00:20:45, he had Caleb Sadler on his toes and a fifteen seconds gap to Fredrik Croneborg and another ten seconds on last year’s runner up Paul Amey.

On the bike, Fredrik bridged the gap to Mitch Robins and managed the day’s fastest bike split in 01:14:15, the duo rode together until transition two, when they had a three minutes gap to Sadler and Amey.

Once on the run, Robins quickly opened a small gap to Croneborg, who despite winning Challenge Taiwan full distance just two weeks ago, stayed twenty seconds back for the whole run. In the end it was Robins that had the best run split in 00:47:30 for the 13k hilly run course, finishing in 02:24:39, Croneborg came in 2nd in 02:25:12 and Paul Amey rounded the podium in 02:34:45

See also:  Amelia Watkinson makes it 3 wins in a row, Kevin Collington takes the men's title at the inaugural Ironman 70.3 Busan in Korea Amelia Watkinson started the day leading the swim in 00:23:30, she had over one minute gap to the chasing group that included Dimity-Lee Duke and Michelle Duffield and another minute to Katy Duffield and Renee Baker.

On the bike, Amelia’s bike split of 01:09:08 was the best among the women and the 5th best overall including the men. She reached transition two with a 4’30” gap to Dimity-Lee Duke and 6 minutes to Michelle Duffield.

Video: How To Silence A Noisy Bike - Solve Other Creaks

Fasted Vs Fueled | What’s The Best Way To Fuel For Morning Training?
September 11, 2020