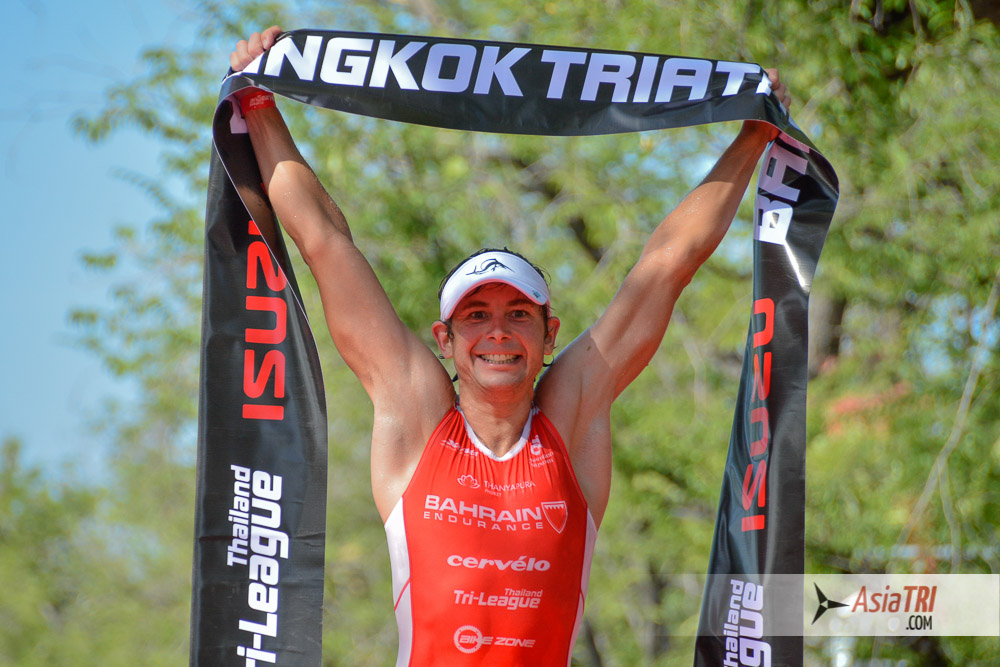 Fredrik Croneborg from Sweden and Dimity-Lee Duke from Australia were the champions of the 2015 Isuzu Roboman Bangkok Triathlon. The event was the second race out of four of the Thailand Tri-League, the next stage is in Pattaya in October and with the grand final in Phuket in November. A pack of six swimmers which included Fredrik Croneborg, Simon Agoston, Mitch Robins, Caleb Sadler, Andy Wibowo and Paul Amey exited the waters of the Chao Phraya river together in just over seventeen minutes for the 1.5k swim. The leading pack had one minute on Nick Gates, the former Tour de France rider finished 2nd in the first edition of the Tri-League.

Once on the bike, Fredrik quickly attacked and managed to break away from the chase pack, who were riding together for the first ten kilometers of the 55k bike leg, from that point the chasing pack fell apart with Paul Amey and Caleb Sadler attacking the group and opening a small gap to Simon Agoston who was riding in fourth.

That order remained the same until the end of the bike, Fredrik arrived at transition two with the day’s best bike split in 01:15:12. The transition area was located just outside Bangkok’s most famous temple, the Grand Palace, with a five minute lead to Amey and Sadler, with Agoston another twenty seconds back.

Fredrik who is a world class runner, cruised to the win in 02:16:06 and extending his lead even more on his competitors. Paul Amey was second place followed by Simon Agiston

On the girls side we watched a much more competitive race in between two Australians Dimity-Lee Duke and Renee Baker. Baker was the first out of the water in 00:19:23, she had a over a minute gap to Duke and Thailand’s Tassawan Sirivongs.

One the bike Baker was able to hold her lead but saw the difference falling to only thirty seconds by transition two as Dimity-Lee had the best bike split in 01:24:30.  France’s Carole Fuch was third into transition.

Once on the run, Baker was able to hold her small lead to Duke until the 6km mark, but while at that moment Dimity-Lee was the new leader, Baker stayed within striking distance. In the end Dimity-Lee Duke managed to pull the victory in 02:30:21, less than a minute ahead of second place Renee Baker  in 02:30:55, Carole Fuchs was third in 02:48:16