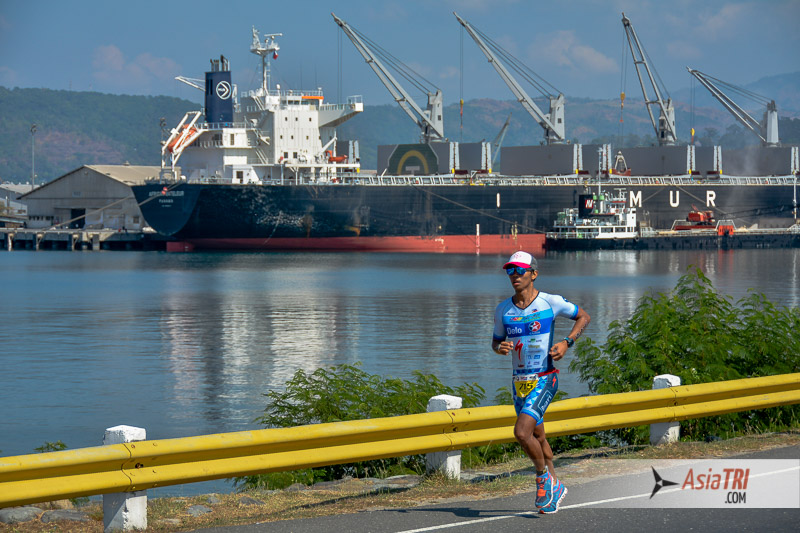 Felipe “Jong” Sajulga III is now considered the top age group triathlete in the Philippines.   More than a month ago in Ironman Taiwan in Penghu, he finished as the 2nd overall age grouper, and bagged his much-coveted 2017 Kona slot.  He also competed in Challenge Roth last July, establishing his iron-distance personal best of 9:54:16, including a 3:20 run split.  AsiaTRI did an interview again with Jong to catch up with him, and how much have changed since he was last featured two years ago.

AsiaTRI: Congratulations on bagging the Kona slot! It has been two years since we last featured you on our site.  Can you tell us how  much improvement and learnings you have gone through since 2014 IM Langkawi?

Jong: Daghang salamat! (thank you very much!) 2014 IM Langkawi was very memorable for me because it made realize that qualifying for Kona is possible after all.  It was my 2nd full distance triathlon (1st was IM Melbourne the same year) and I finished 5th in my age group (30-34 then), 6mins behind the 3rd placer as only 3 slots were given to our AG. I brought with me a lot of positive things from the race, I was enormously surprised with my decent  performance considering that the race was dubbed as “The toughest show on earth” (and it certainly lived up to that billing!) and I did not have any expectations coming in. I also learned that if I work harder and continue to focus on the goal, anything is possible Though it left a bad taste in my mouth as I felt there was unfinished business and I needed to come back in the future, it gave me a huge confidence boost and a positive outlook about my chances in my next attempt(s). But having committed for 2015 IM Arizona already, I was looking at 2016 to return. So here I am again about to test myself against the beast of a course though they have tweaked the course since last year. It will be pressure-free and should be a fun race since I already got the 2017 Kona slot in last month’s IM Taiwan. My goal is to improve from my 2014 race, not in terms of finish time but in how I manage my race and execute the race plan.

AsiaTRI: You certainly worked and trained hard to prepare for Ironman Taiwan, and we know you trained with the world’s best in Jeju for the TriSutto camp.  How was it like training under Coach Brett Sutton?

Jong: Save for the 2-week TriSutto camp in Jeju, my Ironman Taiwan preparation was actually the “easiest” , intensity and mileage-wise, for the six full distance triathlons I have done so far. I did Challenge Roth in July  and 70.3 Cebu, for fun, 3 weeks after so Coach M@ made sure that I recover properly and eased me back into building up for IM Taiwan. August and first half of September was mostly  low intensity and volume. Each of my IM build ups is unique, including my 3 marathons, so it did not come as a surprise to me.  In Jeju, intensity was amped up but the mileage more or less the same as it was only 2 weeks out form IM Taiwan. Coach M@ wanted to make sure that I was sharp but at the same time as fresh as possible for the expected suffer-fest in Penghu. It was actually more of mental than physical training (but still very physically demanding, of course!) when I got there, learning to have the right mindset and doing everything the right way. The hard workouts become bearable when you are in a great training camp atmosphere where everyone is on the same page and really putting in the work.

I got to Jeju a week before the scheduled age grouper camp so I had the chance to train under, learn and observe Brett “The Doc” Sutton. Brett had a couple of sit down talks, aside from those before and after training sessions, with us age groupers where he discussed everything triathlon especially the TriSutto ideals, principles and ways that are seen as unconventional to many but undeniably very effective and made evident by the countless world champions that he has produced. He can talk all day if needed and I can listen to him intently the whole time, no sweat. So much to learn from him. I have Coach M@, who goes way back with Brett since their TBB days, to thank for for this surreal and awesome experience as he constantly convinced me to give it a go as it will be very beneficial for me not only for the Penghu race but in the long run. I would have preferred to stay there for at least a month to get the max benefit of a quality training camp but my responsibilities back home these days will not allow me. 2 weeks was very short but I learned a lot and was such an eye-opener that I intend to use the experience moving forward especially for my Kona 2017 preparation and race proper. Looking forward to more training camps in the future.

AsiaTRI: And you had a close hand look with eventual Kona champ Daniela Ryf, must have been surreal huh?

Jong: It was such a treat to see the now 2-time Ironman World Champion up-close, observing the way she approaches and executes training sessions as well as the way she handles herself when not training. Was star-struck everytime I saw her, which was almost everyday, but stayed from afar so as not to disturb here. But was lucky enough to have a couple quick chats with the Angry Bird. Other TriSutto professional triathletes Mary Beth “Honey Badger” Ellis, Sarah Crowley, Corinne Abraham, Jordan Bryden, Gerhard de Bruin as well as fast age groupers like Jane Hansom, who was just crowned the W45-49 world champion in Kona last month, were also on hand. I simply had to be a sponge and absorb everything and anything that I could from them PROs…paying attention to details and how they go about things on a daily basis. Though they are ultra-competitive and dead-serious during training sessions, they get along well and a fun bunch during their down time. They are humble, friendly and helpful to mere mortal age groupers like me 🙂 TriSutto is like family, everyone is looking after each other. AsiaTRI: This is rather a sensitive question, your Dad just passed away, and definitely  knows your dream of going to Kona. And now that the dream is a reality, how is it like, getting it done, without him?

Jong: It is definitely bittersweet. I’m really happy and relieved that I finally got the very elusive Kona slot after a few close-calls and disappointments but at the same time really sad that Papa is not physically around anymore to celebrate with me this feat that I promised to him to accomplish. He was my number one fan and supporter so this is for him. It has been a very difficult year for me emotionally and mentally so this is indeed very special. I’m sure though that he’s smiling and happy for me up there and will be continue to be with me in spirit as I race in Kona next year. Triathlon has kept my sanity all throughout this difficult time as my outlet so there is no stopping anytime soon.

AsiaTRI: Now that the Kona slot is locked up, and it will be your big race for 2017, how would you prepare for it/ Any goals you have in mind going into Kona 2017?

Jong: The plan is to enjoy the journey, go to Kona in my best fitness possible and have the best race of my life. Qualifying is only half the goal, participating and finishing it makes it complete. There is no reason to celebrate and relax just yet because a lot of work needs to be done between now and October 14, 2017. I invested a lot, in all aspects, into this TRI dream so I am going all-in to make it a reality and a success at that. It will not be easy but I am willing to take the challenge and do whatever it takes. Coach and I have already talked about me racing even less races next year in order to have long training blocks, and I am all for it. The Doc mentioned that each of us has his/her own Everest, so I will be aiming for that. I want to find out how fast, strong and better I can get because anything is possible.