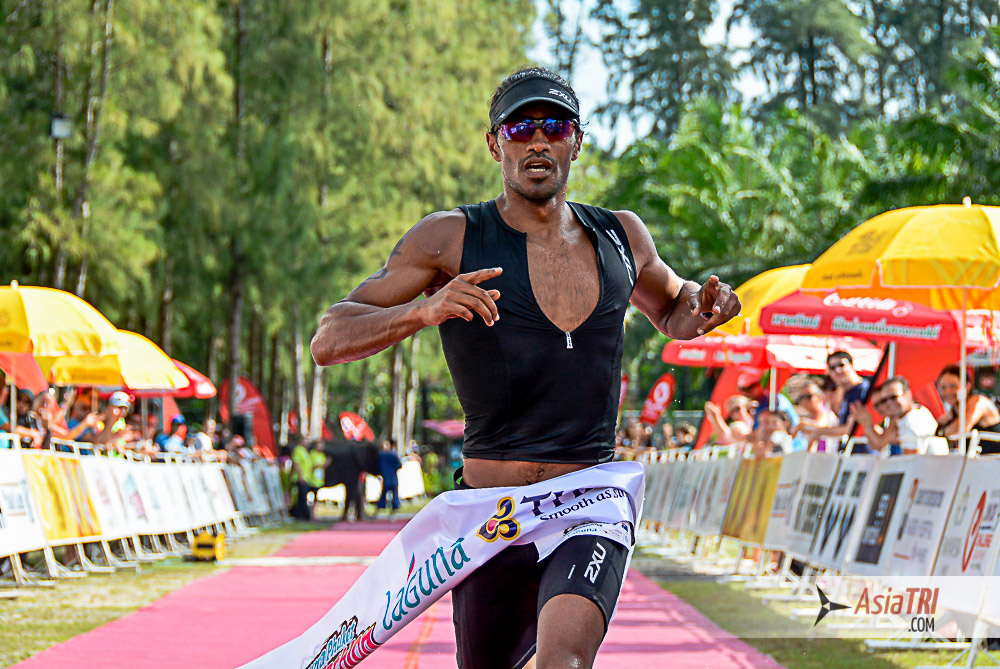 Clinton Mackevicius, an Australian based in Hong Kong, was the fastest age grouper at the 2014 Laguna Phuket Triathlon and had the 2nd fastest run split of the day including all professional athletes, he ran a 43:05 for 12km which was only 8 seconds slower than the fastest overall run of the day, from pro athlete Mitchell Robins. Clinton finish time at LPT was 02:40:30 which got him in 6th place overall. Learn more about Clinton in the below interview. Growing up on the east coast of Australia (Newcastle) you were guaranteed to have played either rugby &/or surfed. Played rugby for 8yrs as a junior before stumbling into running at 16 years of age. With zero expectations nor understanding (ignorance is bliss) of middle distance running I managed to win both track and x-country national titles within the first 6 months, which lead to a scholarship at the AIS (Australian Institute of Sport) 18 months later. As a runner I had won 7 National titles ranging from 1500m to X-Country and have been fortunate enough to represent Australia on numerous occasions internationally. Plagued by a myriad of injuries for many years I finally decided to leave competitive running aside in 2006, although I continue to train at a manageable level of running that my body can cope with. i.e. not 150km per/week which was the peak when running.

It wasn’t until 2007 when I started toying with the idea of triathlons whilst living in Tokyo. The general progression of sprint through to Olympic distances, lead to Phuket Laguna Tri in 2006

Phuket was my second triathlon in 2yrs. Expectations weren’t high at all having DNF’d my 2nd ever race (tri , track and x-country) in Taiwan 3wks prior. Cramped heavily in Taiwan after 5km and wanted to ensure that it wasn’t going to be a repeat in Phuket. Zero expectations in the swim other than to make it out of the water, held back on the bike to stave off cramps going into the run. Minor cramps into the run limited full stride and a decent run leg but made it to the line. Didn’t expect to finish near the top of the AG or Pro fields. It’s a hot race in a spectacular location. If all is not going to plan it’s too idyllic to not enjoy it. Happy that the golf course loop is back as it breaks up the monotony of the run.

Unfortunately I don’t get that much time to train tri specific. Early am starts with work and late evenings limit long sets, therefore I have to maximize what I do when I can. Quality over quantity. Maybe not the triathlon way but it keeps my head above water.

Leading into each event I have the notion of swimming 3x per week for a lead up of 12 weeks but this ends of being crammed into the last 4 weeks.

Bike 3x per week with the Sunday ride being 100km+. The other 2 rides are a steady 1hr and a solid turbo set.

Still haven’t been able to let go of the running so try to keep this consistent. 1-2 fartlek/threshold sessions p/wk. 2x 45-50min runs and a single 60mins run. Tend to not long (90mins+) as I get the load/endurance from the Sunday ride. We have some amazing cyclists and cycling in HK (amongst the hustle of trucks and buses) and the boys always make it entertaining.

I try to take advantage of holidays. Easter is a brilliant break and tend to stay in Phuket, training with the Thanyapura crew. Such a world class set up and the best training you’ll get in Asia. Seeing the development and success of Freddy, and local boys Ray and Oat is inspiring. Ive been very sporadic with racing over the years. I think i’ve raced a total of 8 tri’s in 7yrs. Wanting to race much more this season and finally get some consistent training in. In terms of results i’ve been a bit lucky or more so naive with racing. Have participated in Phuket 3x with a 13th (I think?), 3rd and 6th overall (pro’s incl.). Won overall AG in those 3 races. Have raced 4x Olympic distance getting under 1.53hrs but it’s hard to quantify these distances as they vary so often. 10km isn’t always 10km. I recall racing my first ever sprint distance and I apparently ran 12.37mins for 5km. Argued with the officials afterwards that it was 4km and not 5km, in which they ignored. Much different to track where 5km is 5km.

See also:  Images from the Nations Parade at Ironman 70.3 World Championships in Chattanooga

There’s some amazing junior athletes coming up through the ranks in HK which will make things interesting.

Most importantly i’m hoping to train much more to justify racing and to become more competitive.. Swim: It’s difficult for me to remain consistent as I rarely swim. In saying that I enjoy that feeling of developing strength and feeling marginally competent in the water. Re: sessions. Any Tritons session in HK is brilliant and the Thanyapura swim sets are always tough but enjoyable.

Ride: May sound like a masochist but enjoy a solid turbo set, barely being able to walk afterwards. The Sunday Mad100 in HK is like a stage race. Highly entertaining, stupidly solid but always fun.

Run: Try not to compare to old training sets but hard not to. Still doing the “bread & butter” of distance sets. 6-8km (2.45-2.58min/km) or a variation of 6-8kms sets. Monafartlek is always a staple and towards the end of last year have joined Ian Veitch on 12-14 x 1kms off a steady bike. He’s definitely one to look out for this year.

“Ultimately I don’t consider myself as a triathlete until training, racing and results justify so. Enjoy the aspect of being fit and pushing the limitations of the body (& mind). The fact that these races are held in the most idyllic locations makes you want to be a part of it.”