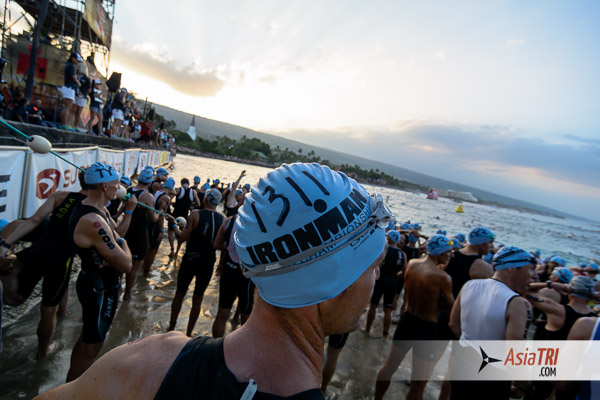 IRONMAN announced today additional ways to get into the 2016 IRONMAN® World Championship in Kailua-Kona, Hawai`i. Opportunities include: the newly created IRONMAN Kona Drawing, which will offer 10 slots to benefit The IRONMAN Foundation; The IRONMAN Foundation’s annual Kona auction on eBay which for the 14th consecutive year will offer athletes an opportunity to bid on one of four slots to benefit the Foundation as well as a special fifth slot auctioned off to support Women For Tri™; One additional slot will be allocated to a female athlete with a compelling story and charitable effort to benefit the Women For Tri initiative. In addition, to reward some of IRONMAN’s most loyal and committed athletes, 25 additional slots have been awarded to participants of the Legacy Program for a total of 125 athletes. Every year, more than 2,200 hard-working athletes have the chance to compete at the iconic IRONMAN World Championship on Hawai`i’s Big Island. It was there that Dave Scott and Mark Allen battled head to head in 1989’s “Iron War.” It was there that IRONMAN legend Paula Newby-Fraser earned her historic eight victories. It continues to be where thousands of athletes have overcome illness and injury, fighting through their own—or sometimes others’—mental, emotional, and physical hardships.

The historic finish line on Ali’i Drive has become synonymous with big dreams, and even bigger accomplishments. It is the place where the IRONMAN mantra, “ANYTHING IS POSSIBLE®,” pulses through the beat of the Hawaiian drum. Below are the various roads to Kona that are being offered for the 2016 season.

Standard qualification: Every year, age-group athletes compete in full-distance races globally for one of only a handful of highly coveted slots to the IRONMAN World Championship. This route demands a lot of blood, sweat, and sometimes tears, as athletes compete against their fellow age-groupers for slots. Each of the 39 full-distance IRONMAN races in the 2016 qualifying series offers a different number of Kona qualification slots which are then divided up according to the size of their respective age-group.

2016 bonus Kona slots: This year, IRONMAN has allocated additional IRONMAN World Championship slots to a few special races. As the last qualifying race of the 2016 season, IRONMAN Coeur d’Alene taking place on August 21 now offers a total of 65 slots. To celebrate IRONMAN Switzerland’s 10th anniversary, a total of 65 slots are up for grabs at the July 24th race.

IRONMAN Kona Drawing benefiting The IRONMAN Foundation: This year, the IRONMAN Foundation is offering a drawing for 10 slots, with a suggested (tax deductible) donation of $50.00 to benefit the Foundation’s charitable giveback in communities around the world. The drawing will begin today (Wednesday, March 23, 2016) and finish on Friday, April 15, 2016, at 12 p.m. ET. Selected athletes will be announced on April 18. Additional information on the drawing can be found here – www.crowdrise.com/racekona.

IRONMAN Foundation annual Kona auction: Beginning on April 18, one slot will be auctioned off each week for five weeks on eBay. The first four slots will benefit The IRONMAN Foundation Community Fund and will be 100 percent tax deductible less the value of the race registration (minimum opening bid of $10,000). New for this year, a fifth slot, also 100 percent tax deductible, will be offered with 100 percent of the funds going to support the Women For Tri initiative (minimum opening bid of $25,000). This slot will be auctioned off once the auctions for the other four slots have concluded on May 16. Additional information can be found here – www.ironmanfoundation.org/programs/specialevents/.

Women For Tri slots: The Women For Tri initiative will also allocate one additional slot to a female triathlete who both a) embodies the spirit of Women For Tri through a compelling personal story that motivates and inspires other women “to Tri;” and b) raises or contributes at least $25,000 to the Women For Tri charitable, tax-deductible effort. This slot will be distributed via an application process. Additional details will be forthcoming.

IRONMAN Legacy Program: The IRONMAN Legacy Program, now in its fifth year, rewards our most loyal athletes with a chance to compete in Kona. These athletes became eligible for selection based on having: a) completed a minimum of 12 full-distance IRONMAN® races; b) never started the iconic IRONMAN World Championship; c) have completed at least one IRONMAN event in each of the 2014 and 2015 seasons; and d) be registered for an IRONMAN event in 2016. This year, we have added 25 additional Legacy athletes to the annual 100 athletes selected for a total of 125. The full list of winners which have been announced, can be found at www.ironman.com/triathlon/news/articles/2016/03/2016- ironman-legacy-winners.aspx. Congratulations to all our 2016 Legacy athletes!