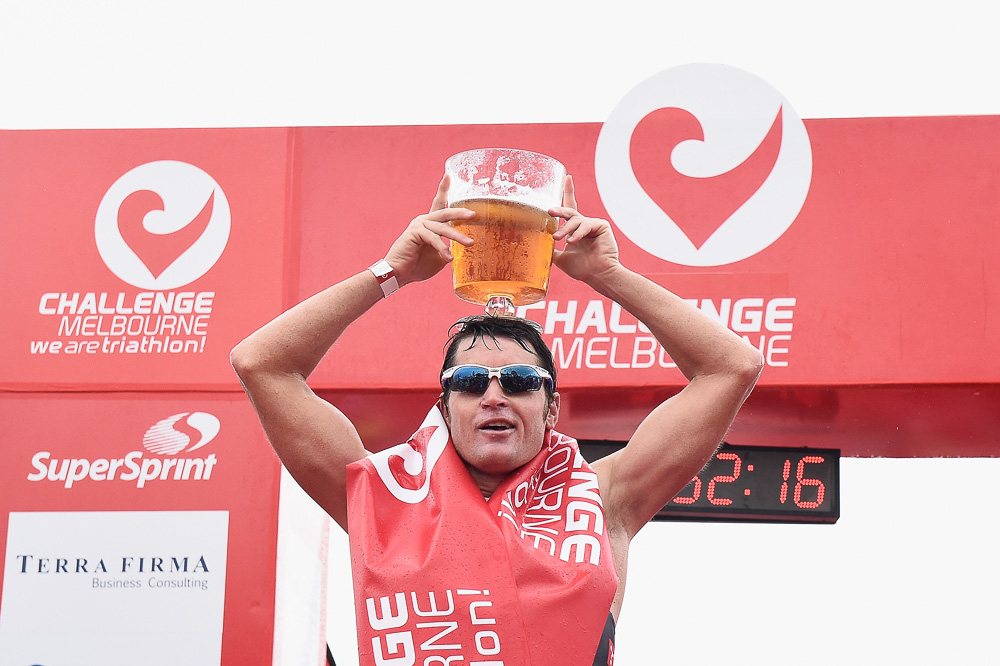 Australia’s Leon Griffin was the best on course today in tough conditions to win Challenge Melbourne from a world-class field, edging out rising star Nick Kastelein and veteran Peter Robertson. In the women’s race, Melissa Hauschildt showed her class running away from Christie Sym and Lisa Marangon to claim victory.

“I just wanted to be aggressive the whole time, sometimes you lay it down on the line and it pays off and it did today,” said Griffin.

Melbourne threw up some difficult conditions for the 1500 athletes with 30kph winds and choppy swells which only served to bring out the best in these athletes – the cream rose to the top today.

Early race leaders Clayton Fettell and Todd Skipworth exited the swim together and stayed at the head of the race for much of the bike on a rain drenched course.

Luke Bell was the first to withdraw on the second lap of the bike, suffering from the cold and wet conditions.

The order remained unchanged for much of the 90km until Griffin made his move in the final kilometres to lead out onto the run from Fettell and Skipworth.

“I absolutely gave it to myself in the first half (bike), I could see them up front, I could see the flick of the lights on the moto’s up ahead and it gave me something to aim for.

“I knew I had to be aggressive when Todd and Clayton got away on the bike, if someone didn’t chase they were going to get big time gaps and the race would have been gone,” said Griffin.

It must have felt like deja vu for Fettell who lead the race last year with a six-minute buffer only to fade on the run and today fell victim to the same fate.

The unrelenting rain and wind did not let but Griffin surged ahead to leave Fettell and Skipworth in his wake on the first lap.

But the big movers were coming at him, Kastelein showed why he is an emerging talent with the fastest run split of the day (1:13:56) making up two minutes on Griffin to record one of his best results for second today. Three-time world champion Robertson ran his way through the field and onto the podium for third.

“I really jumped those guys at the start and was in no man’s land but thought if I can get across to those guys I knew this is my race I’m the best runner, I went bold and it paid off,” said Griffin.

“Nick slips under people’s guard, I raced him at Shepparton so knew he could run. He was making up ground and I knew I had to give it to myself,” said Griffin.

Annabel Luxford lead from the swim but disaster struck for her not long after and she had to withdraw with mechanical issues. That left Sydney’s Christie Sym in the lead from fellow Sydneysider Lisa Marangon. Hauschildt was 2mins 30sec down after the swim and began her chase.

“I just had heaps of bike dramas today – I had to stop and fix up my wheel and then a flat, that was the end of my day,” said Luxford.

After leading for most of the bike Sym was finally passed by Hauschildt at the end of the second lap on the bike who didn’t look back, cruising to victory. The win sets up a good start to her season as she attempts to take out the new Challenge Triple Crown Series in the Middle East. Her assault begins on February 27 at Challenge Dubai, then Challenge Oman (Aug 7) and the final Challenge Bahrain (Dec 11) – there is a USD$1million prize purse on offer to anyone that wins all three.

It was an impressive performance for Sym who has struggled with injury for a long time and is finally returning to good form, now based at Lennox Head training with Berkel, Fettell and Robertson.

Sym will now turn her focus to Challenge Wanaka in New Zealand on 22 February. Marangon put in a solid performance to round out the podium in the tough conditions.

“I was really happy to only be two and a half minutes down after the swim,” said Hauschildt

“The plan was to ride as I hard as I can, I like the wind, the rain made the corners a bit sketchy, so I took that real easy. I felt pretty good on the bike. The run on the last lap was where the legs fell off,” said Hauschildt.