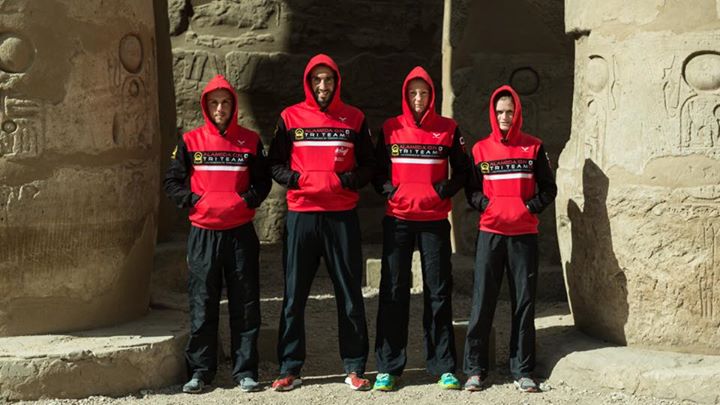 Alameda O.N triathlon team has been launched in Luxor, Egypt which includes former Ironman World Champion Leanda Cave, long course specialist Eimear Mullan and on the Men’s side two up and coming Arab athletes who are short course specialist and are working to qualify to the Rio 2016 Olympics, Lawrence Fanous and Omar Nour.

The goal of the team is to get more young Arabs to embrace the sport of triathlon. This effort comes in at a great timing as Challenge Family has announced the triple crown races in the Middle East (Dubai, Oman and Bahrain). AsiaTRI was in Bahrain covering the event and we now have a special section for the Middle East, with more specific content to come.

The pro team will include four triathletes and while organisers are yet to release the names, the roster includes a UAE-based professional as well as “multiple world champions” according to Team Manager Hassan Afifi.

Alongside the pro team, a development squad will be formed, comprised of promising prospects in the Arab region.

The elite team will be supporting the development squad through mentoring and sharing their vast experiences with the young athletes. Meanwhile, the pros will be getting all the support they need to stay on top of their game, as they represent the Alameda O.N Tri Team.

Through joining forces with the Arab Triathlon Confederation, Alameda O.N. Tri Team will be going to schools and sports clubs around the Middle East and North Africa (MENA) region throughout the year, promoting an active and healthy lifestyle, as well as raising awareness for triathlon.

See also:  Video: How Do I Improve Stamina For Long Rides? | Ask GCN Anything

2 X Arab Champion, ITU Murakami Asia Cup winner. Lawrence has already started collecting precious points towards qualifying for Rio 2016. Living near Loughborough, UK, where he studied at university, he has made use of also being close to the Team GB triathlon programme, before starting to race under his paternal Jordanian flag in 2009.

–
Omar Nour (EGYPT)
First Egyptian professional triathlete. Started from the fat corporate dungeons and emerged as a lean, mean triathlon machine. Now leaving no stone unturned in his quest to qualify for the Olympic Games in Rio 2016
–
LEANDA CAVE (GBR)
Competing in triathlons since 1994, Leanda has gone on to be on top of the world at all distances. Ironman World Champion, Ironman 70.3 World Champion, ITU Long Distance Champion, ITU Short Course World Champion.
–
Eimear Mullan (IRELAND)
Pro athlete only since 2011, Eimear has jumped up through the ranks so quickly to become multiple Ironman, Ironman 70.3, and Challenge champion, with several wins and podium finishes in 2014. She also earned herself the Tri Ireland Athlete of The Year 2014 title.
More info on the team: https://www.facebook.com/AlamedaonTriTeam/i
Follow us

The Philippines’ Longest-running Triathlon event SubIT to be held on April 29-30
April 17, 2017