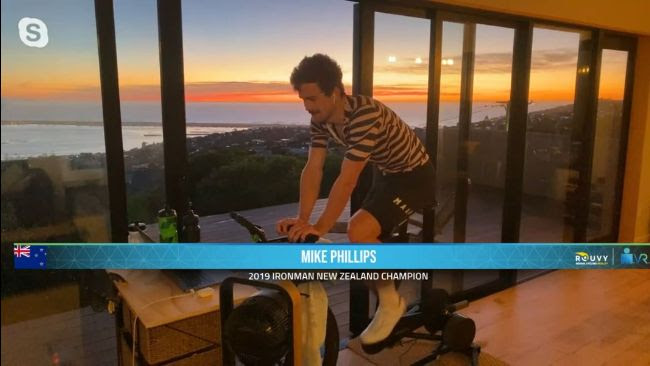 For the women’s professional race Saturday, Teresa Adam claimed the victory with a time of 54:47, while fellow countrymate Hannah Wells (NZL) finished in second place with a time of 56:34. Radka Kahlefeldt (CZE) who is now based in New South Wales took third position with a finishing time of 59:50 as Ashleigh Gentle (AUS) rounded out the group clocking a time of 1:00:36.

The full broadcast of the women’s IRONMAN VR6 Pro Challenge can be viewed, HERE.

While it was Sunday in the Western Hemisphere, it was an early Monday morning for the professional men in the Eastern Hemisphere when they hit the virtual course. Mike Phillips (NZL) claimed the bragging rights as the victor of the men’s IRONMAN VR6 Pro Challenge, completing the 40 km ride in a time of 48:42. Braden Currie (NZL) kept things close and came up just six-seconds shy ultimately taking a second-place time of 48:48. Professional triathlete Josh Amberger (AUS) finished third in a time of 53:51. At the 29 km portion of the 40 km course, Tim Reed (AUS) took the “Watt Bomb” challenge to a whole new level when he unfortunately suffered a blown fuse on his trainer and was forced out of the competition with a mechanical failure. Following the men’s portion of the pro challenge, Reed vowed to go out on the roads and finish off the remaining 11 km resulting in an unofficial time.

The full broadcast of the men’s IRONMAN VR6 Pro Challenge can be viewed, HERE.

In total, more than 21,000 athletes from more than 137 nations and all 50 states set out to participate in the IRONMAN VR6 – 5150 Olympic distance simulation. IRONMAN VR6 requires athletes to complete a 3 km Run, 40 km Ride, and 10 km Run between Friday, May 8 at 2 p.m. ET (6 p.m. GMT) and race close this evening, Sunday, May 10 at 7:59 p.m. ET (11:59 p.m. GMT). Competitors can complete the three segments in any order and are not required to do the segments consecutively. Athletes are able to compete anywhere, indoors or outdoors. Bringing the IRONMAN community together virtually, the IRONMAN® Virtual Club™ continues to grow and now has more than 90,000 members on the platform with thousands completing IRONMAN Virtual Club Challenges since its launch.

IRONMAN VR6 leaderboard updates can be found by visiting the IRONMANVR Facebook Page.

Is this your Ultimate Indoor Cycling Set-up?