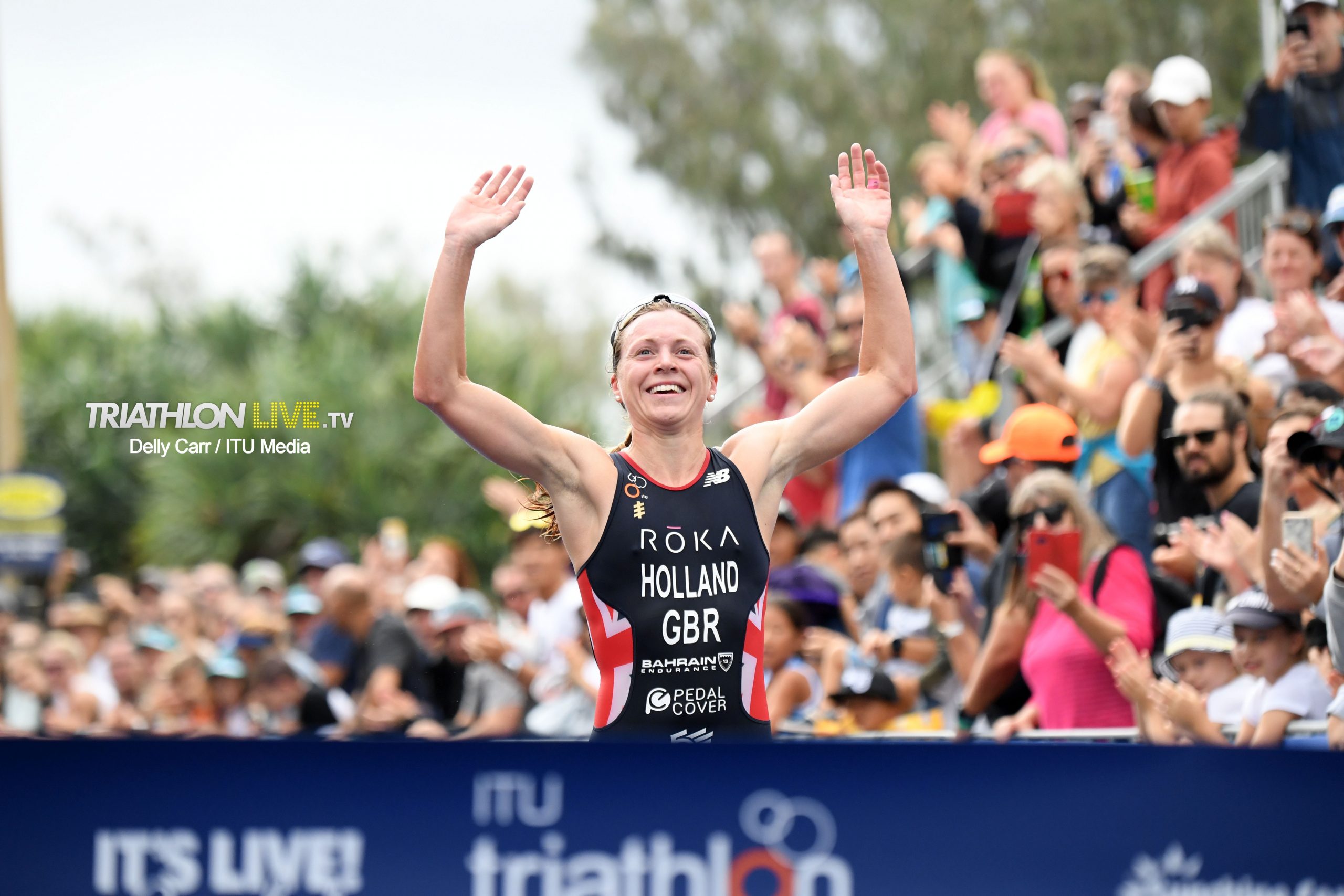 he 2020 season started in Mooloolaba, Australia, with the Mooloolaba ITU Triathlon World Cup.

Located on the famous Sunshine Coast, Mooloolaba hosted a world class field of elite men including Olympians, Commonwealth Games representatives, experienced and emerging triathletes on the circuit, as it served up the first fix of World Triathlon, specifically World Cup, race action.

The elite men were tightly bunched and closely together in the ocean sprint swim with only a few seconds between the huge group. Slovakian Olympian Richard Varga, Hungary’s Mark Devay and Diego Moya from Chile were the first men to hit the beach and run to the first transition of the day. Australian Commonwealth Games Mixed Relay gold medallist Matthew Hauser and Tayler Reid from New Zealand were next in.

A huge train of nearly 30 elite men rode together across the 20km bike course with athletes from the British triathlon team putting the pressure in front at times.

A quick transition by Australia’s Matthew Hauser saw him motor out of the second transition in Mooloolaba to lead out onto the run followed by New Zealand Olympian Ryan Sissons and Japan’s Kenji Nener.

Willian from Australia and Ben Dijkstra from Great Britain were placed in the mix of the leading men on the run. A strong group of elite men established a noticeable gap on the final portion of the race and this is where the podium was going to come from.

Sissons showed no signs of backing down across the final stage of the run and he had young gun Wilde hot on his heels.

A thrilling sprint saw Sissons storm across the finish line to take the tape and earn the gold medal while Wilde clutched onto silver with an outstanding race performance.

“It is a good feeling. The last two years have been pretty average, I have had some good races and I have had some absolutely terrible ones. The last two races of last year I didn’t even finish. I had really good summer of training with the group in Cambridge high performance centre. I came here determined to win, I wanted to win this race. I have always wanted to win this race, it is a great one to race at.

“I did everything I needed to do and I put myself in the best position on the swim, right in contact, on the bike I was at the front the whole time and I went off on the run as hard as I could and let everyone else chase and it paid off,” said Sissons.

“Running into the finish I had to go early because I knew that if I sprinted the calf wasn’t going to enjoy it. Ryan pipped me at the end but I am stoked to be here,” said Wilde.

Willian from Australia claimed bronze and just as Mooloolaba had witnessed in the women’s race, saw Australia round out the elite podium.

“Mooloolaba was my first World Cup win, so full stop, this race has always had a special bond with me and place in my heart. I have always come up here for holidays since I was a little kid. Ever since I was 13 or 14 I have watched the elites race around here and to do that now as an elite. It is one of the greatest races and I really love it,” said Willian.

With Olympic qualification points on the line and early changes to the 2020 race season, the coast of Mooloolaba in Queensland, Australia, set the scene for the opening World Cup of the year, hosting a stacked elite women’s field.

The 750m swim course was moved to the Southern end of the beach but the elite athletes still tackled a warm ocean swim, which Mooloolaba World Cup is famous for. The choppy surf conditions, for the race, suited the elite women from Australia and New Zealand, renowned for their ocean swimming abilities.

The British triathlon team have been based on Australia’s Gold Coast, for a pre-season triathlon training camp since January, which involved a great deal of ocean swimming, so they were lining up ready to test their ocean skills among a strong field of specialists.

Emma Jeffcoat, who comes from an Australian surf background and USA’s Kirsten Kasper were the first elite women out of the swim, up the beach and into the first transition of the day.

Jeffcoat and Kasper were followed by a strong file of elite women made up mostly of Australians and New Zealanders.

World class experience was in the mix of today’s World Cup race with the likes of Olympians Andrea Hewitt from New Zealand and Barbara Riveros representing Chile were among the women chasing.

A huge group of women were up front and looking to make an early impact on the bike with the likes of Taylor-Brown, Holland, Jeffcoat and Kasper taking turns in front seat. Sophie Corpbridge from New Zealand was also in the mix of the leading group and attempted to take charge across the first leg of the 20km sprint course.

The iconic and stinging Mooloolaba hill, which athletes climb and rode over four-times in the race, saw Taylor-Brown showing off the power in her legs, as she remained out in front. Australia’s Jaz Hedgeland, placed in the mix of this strong group of leading women, also did some impressive work to lead up over the hill.

The day started with sunshine but quickly turned to drizzle in the middle of the race which meant that the women had to execute caution as they took the turns around the Mooloolaba course. The same group of over 30 elite women worked together across the 5-laps of the 20-km bike course which determined that it was going to come down to who had conserved the leg power for the blistering 5-km running race that was about to unfold.

With the likes of Gentle who is renowned for her running performance and the power of the British team featuring Holland and Taylor-Brown, the battle for the podium was yet to be decided.

It was Australia’s Jeffcoat who produced the quickest second transition to lead the field of elite women out on the course, which was lined with exceptional support from the Australian triathlon community. Kasper and Australia’s Gillian Backhouse were right on her heels.

Taylor-Brown, Holland, Natalie Van Coevorden and Gentle were in the mix of the elite women only seconds back from Jeffcoat and on the hunt for World Cup victory. Riveros from Chile was just behind the leading charge.

The run course in Mooloolaba is across 3-laps and features the same hill along the coast which tests the power and speed of the athletes. The challenging climb saw athletes jostle positions and it wasn’t long before the British duo Holland and Taylor Brown strode out in front. Jeffcoat dropped back into third position.

Across the final stages of the race Holland, 2016 Rio Olympic bronze medallist, displayed her world class experience as she pulled away from the field to dominate the race.

Taylor-Brown remained in second position and Australia’s Gentle was battling it out for bronze with New Zealand Olympian Hewitt and Ecuador’s Elizabeth Bravo.

Vicky Holland stormed to victory in Mooloolaba to earn the 2020 title. Fellow team member Taylor-Brown was awarded the medal, in what was her first race experience in Mooloolaba.

“On paper this was a World Cup race and not a World Series race but this race means a lot more than that because of the current climate and because we don’t know when the next race will go ahead. So today was really important because it might be my only race for quite a while.

:I wanted to see how my winter’s training has gone because I have done a lot of work on the swim bike and I felt they were both pretty solid today. I haven’t really started my full run training yet and I am probably about 60-70 percent on volume so I am over the moon with that result. I didn’t think I would run that well but I got the bit between the teeth and I thought I would have a dig and I came out on top,” said Holland.
.
Gentle displayed impressive early-season form, to earn the bronze medal in front of a home crowd.

“Mooloolaba is always a tough start to the year and it is a pretty hard course but I really enjoy it. There are a lot of people who can hang onto bike groups over that course so I tried to position myself well. There were a few girls pulling good turns on different sections but I really just tried to stay up the front but unfortunately at the end of the bike a lot of riders came around me at the top of the hill and it meant that I was in T2 towards the back of the group and couldn’t respond. For first race of the season I am pretty happy that I could come from behind after an ordinary T2 and grind my way up into third,” said Gentle.

The IRONMAN GROUP’S Response to Covid-19